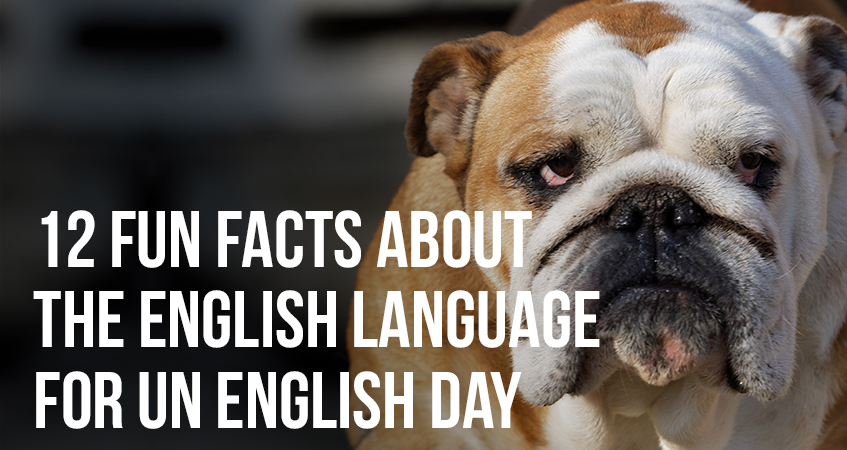 Today is UN English Language Day, a day set aside by UNESCO to  “to celebrate multilingualism and cultural diversity as well as to promote equal use of all six of its official working languages throughout the organization.”

Not coincidentally, it’s also William Shakespeare’s birthday. So, in honor of UN English Language Day and the Bard, here are 12 fun facts about the English language.

The most common letter in the English language is “e.”

2)  Speaking of Shakespeare, he added a lot of words to the English language.

Some sources say 1,700. Other sources say not so much. But he did coin quite a few words and phrases that are still in use today. Some of his (probable) contributions include:

3) The oldest words in English are thousands of years old.

They include personal pronouns and numbers: I, We, Two, and Three.

4) The newest English words were added to the Miriam-Webster Dictionary just yesterday.

5) Dictionaries can be haunted.

“Ghost words” are words that were rarely or never used but that somehow end up in a dictionary anyway. They are usually the result of printing errors, either in the dictionary itself or in source material. Once such errors are included in the dictionary, scholars sometimes scramble to justify them.

For example, consider the word “morse,” originally a typo in certain editions of Sir Walter Scott’s “The Monastery.  According to Professor Walter William Skeat, who presided over the Philological Society in 1886, the word

[O]ccurs in a misprint of a passage of one of Scott‘s novels, but here there is the further amusing circumstance that the etymology of the false word was settled to the satisfaction of some of the readers. In the majority of editions of The Monastery, we read: … dost thou so soon morse thoughts of slaughter?

This word is nothing but a misprint of nurse; but in Notes and Queries two independent correspondents accounted for the word morse etymologically. One explained it as to prime, as when one primes a musket, from O. Fr. amorce, powder for the touchhole (Cotgrave), and the other by to bite (Lat. mordere), hence “to indulge in biting, stinging or gnawing thoughts of slaughter”. The latter writes: “That the word as a misprint should have been printed and read by millions for fifty years without being challenged and altered exceeds the bounds of probability.” Yet when the original manuscript of Sir Walter Scott was consulted, it was found that the word was there plainly written nurse.

Other “ghost words” have included “kimes,” a misprint of “knives,” and “dord,” a totally made up word that haunted Webster’s Dictionary for 5 years before being caught and exorcised.

6) A lot of words that you think of as “English” were actually borrowed from other languages.

For example, “I” and “we” may be among the oldest English words, but “they,” “their” and “them” come from the Old Norse “þeir.” The original English pronouns were hie, hire and heora. Other common borrowed words include “leg” (from the Old Norse leggr), “skin” (also from Old Norse), and “person” (the Old French persone).

It looks exactly the same when you turn it upside down.

8) If you wrote out all the number names in order, the first “B” you’d see would be the “B” in billion.

It’s true! Don’t believe me? Feel to try to it for yourself. We’ll wait.

Back when people used sundials to tell time, the day was divided into solar hours based on the position of the dial. Solar hours were in turn divided into four puncta (quarter-hours), ten minuta and 40 momenta. The actual length of a moment varied depending on the hour, but it was approximately 90 seconds.

10) The longest word in the English language is neither “antidisestablishmentarianism” nor “supercalifragilisticexpialidocious.”

The longest word in a major dictionary is “Pneumonoultramicroscopicsilicovolcanoconiosis,” which a lengthy way of describing the lung disease “silicosis.” Silicosis is caused by inhaling fine sand and ash dust, which irritates the lungs and causes scarring.

11) Right now, there are only three words in English that end in -gry:

12) The letters “ough” can be pronounced 9 different ways.

Find them all in this sentence: “A rough-coated, dough-faced, thoughtful ploughman strode through the streets of Scarborough; after falling into a slough, he coughed and hiccoughed.”

Happy UN English Day, and happy birthday to Shakespeare! Can you think of any other fun facts about the English language? Share them in the comments.