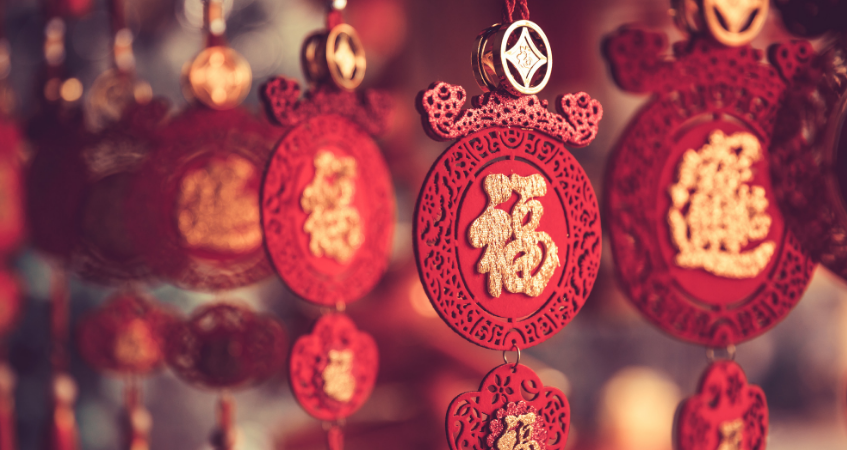 Chinese New Year falls on February 16th 2018. Each year is assigned one of 12 Zodiac signs with an associated animal. 2017 will be the Year of the Dog. The Chinese believe that each sign has associated characteristics, with people born under the dog sign believed to be very loyal. Honest, helpful, and steadfast to the point of stubbornness, Dogs are outwardly popular but often suffer from anxiety.

In addition to designating an animal for each year, the Chinese zodiac also cycles through the five elements of nature: Earth, Wind, Water, Fire, and Metal.

Expecting a new addition in 2018? Babies born this year will be Earth Dogs. According to this Chinese astrology guide,

“Earth dogs are broad-minded, faithful, considerate, well-disciplined and they stick to principles. Also, they are grateful, chivalrous, brave and have the courage to take the blame for what they do, thus it’s easy for them to offend somebody. Earth dogs always have clear goals and they are self-poised towards success and failure, never compromising their conscience to do things. They are persistent and never give up. They believe in the life philosophy of taking their own road in a down-to-earth manner. Although earth dogs are very capricious sometimes, they never hurt others arbitrarily and they respect the other’s position and attitude rather than forcing the other to accept their opinions. Earth dogs don’t like to interfere in the life of others, vice versa.

Earth dogs have the artistic spirit, so it’s not suitable for them to work in industry and commerce circles with fierce competition and internal strife. It doesn’t mean that their physical strength or fighting spirit is inferior to others, but their practice and personality cannot cater to others in this complicated society.”

Were you born in the Year of the Dog? Watch out! According to Chinese astrology, 2018 will be unlucky for you.

To help you celebrate, here are some fun facts about this holiday:

In addition to China, Spring Festival celebrations are organised in dozens of countries around the world, with in excess of 2 billion people taking part; countries such as Malaysia and the Philippines have huge celebrations, while communities gather in Chinatowns worldwide to hold events and set off fireworks and lanterns. Public holidays lasting from one to four days are common throughout Asia, while celebrations can extend for a week in Vietnam.

Hong Kong usually holds a major horse racing festival at this time, which proves extremely popular with its citizens and visitors – events include fireworks, theatrical shows and many other displays. The events in Hong Kong are considered to be among the very best celebrations in the world each year; as well as fantastic major events there are also many bargains on offer from shops and companies across the city, and huge amounts of beautiful flowers used for decoration and display.

Major western capitals such as London hold their own Chinese New Year celebrations; London often sees more than half a million people across the city taking part in organised events. It’s been estimated that some 4 million journeys take place, not just in China but in other countries, as people make their way home for the festival and celebrations.

So which Chinese Zodiac Animal represents you?

Below you can see the Chinese translation of each of the animals in the zodiac, further down you can check the animal that represents you by looking up the year you were born in the table. For Chinese translations of anything else, we have just the right team of experts to help.

Remember, if you need translations in Chinese, or any other language for that matter, our specialist team can help you via our document translation service.

This post was originally published in 2014. It has been updated with current information.

38 thoughts on “21 Fun Facts about the Chinese New Year”