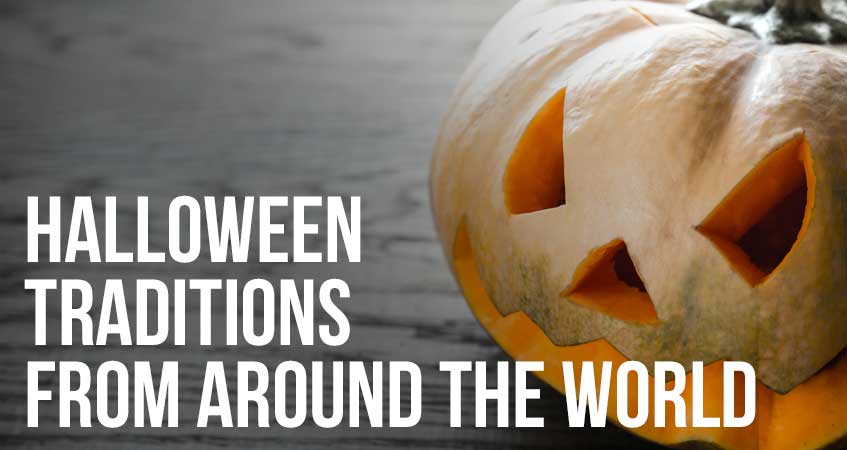 It’s Halloween! How will you celebrate? Here are some traditions and translations from around the world.

Many of our Halloween traditions come from Samhain, the ancient Celtic harvest festival. So, it’s no surprise that Ireland is one of the world’s biggest Halloween hotspots.  On 31 October, everyone dresses up in scary costumes and celebrates. Children often go out “guising,” going door-to-door to beg food and candy. This tradition dates back to 16th century Samhain celebrations, but the phrase “trick-or-treat” is a relatively new American import.

One thing sets the Halloween festivities in Ireland apart from the rest of the world: Fireworks, and lots of them.  In Northern Ireland, the city of Derry has a street carnival parade that ends in a massive fireworks display. Fireworks are prohibited in the Republic of Ireland, but that doesn’t stop people from setting them off anyway.

Scotland…putting the “trick” in trick or treat since at least the 18th century. In 1780, poet John Mayne published a poem about Halloween describing “what fearfu’ pranks ensue” on that night. Just as in Ireland, Scottish children have been going “guising” for Halloween for centuries. Traditionally, Irish and Scottish jack-o-lanterns were made from turnips. Turnip jack-o-lanterns are far creepier than the pumpkin variety.

Halloween in the United States

Halloween owes its status as one of the biggest commercial holidays of the year to the United States. But they got a late start- the holiday wasn’t officially celebrated in the US until the 19th century. It came to America along with Irish immigrants escaping the great potato famine. In the US, Halloween is a “melting-pot” holiday, and traditions from around the world have been adopted and adapted to American tastes. “Guising” or “souling” became trick-or-treating.  Lanterns were carved out of pumpkins instead of turnips. Advertisers got involved, and thus began the orgy of decorating, costumes, horror movies and sweets we see today.

Interestingly, as Americans become more fearful of “strangers,” the country that invented the phrase “trick or treat” seems to be gradually abandoning the practice. “Trunk or treats” at churches and shopping malls are believed to be safer. It’s sad, really.

Halloween is not a traditional holiday in the Philippines. However, they do have Todos Los Santos, a three-day celebration for remembering the dead which runs from 31 October to 2 November.

This festival does include some elements reminiscent of Halloween. For example, Filipino children traditionally go from house to house asking for money and sweets in a custom called Pangangaluluwà. This is similar to old European traditions like guising and souling. However, it is gradually being replaced by Americanized trick-or-treating.

Like many other cultures, Filipinos believe that the dead can visit the living on these days. In Filipino tradition, the dead manifest their presence by taking objects from their loved ones and moving or hiding them.

Halloween is not a traditional part of Italian culture. That said, All Saints Day and All Souls Day have been celebrated for centuries on the first and second of November. Some of these traditions are similar to those of Halloween, however.  For example, many parts of Italy have traditionally carved pumpkins and filled them with candles, lighting a path for dead loved ones. In Lombardia, pumpkins are also used to hold offerings of wine. It’s even been theorized that our modern-day Halloween comes from the ancient Roman feasts of Pomona (celebrating the harvest) and Parentalia (celebrating the dead.)

In many parts of Italy, the dead “leave” presents for children in their stockings (via the children’s parents, of course.)

Of course,  an Americanized version of Halloween is increasingly being celebrated by the younger generations.

Are there any interesting local Halloween customs where you live? We’d love to hear all about them in the comments.

Tags: Halloween spooky trick or treat
Previous Post K International on the Gadget Show
Next Post The Multi-Lingual Digital World: Why You Need to Translate Your Site