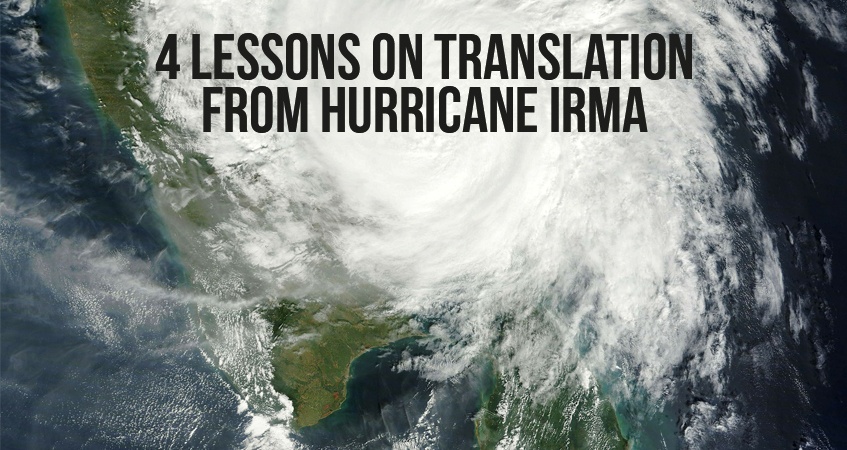 Irma marks the second major hurricane to strike the United States in the past 30 days. Like Harvey, Hurricane Irma struck a heavily-populated, multicultural part of the country. And also like Harvey, translation has been essential in getting people out of the storm’s path, and in getting victims to safety.

In a situation like a hurricane, it’s essential that the government be able to communicate with its citizens. Communication errors can be deadly. And there’s no way around the need for translation. For instance, 72.8% of the 2.5 million people living in Miami don’t speak English at home. Most of these people (64%) speak Spanish. About half of those living in Spanish-speaking households also speak English “very well,” which means the other half does not.

Add in all of the other, smaller language groups and the need to reach the visually impaired,  deaf and hard of hearing, and you can imagine just how much language help is needed.

The effort hasn’t always gone as smoothly as it could have. With that in mind, here are 4 lessons on translation in times of crisis we can learn from Hurricane Irma.

According to The Atlantic, the non-English versions of the Florida Division of Emergency Management’s website are plagued with broken links, as a result of a clash between the iFrame coding used on the site and the automated software used to translate it.

Now, I haven’t seen any indication that there were translation errors on those pages. But when you’re translating a website, translating the information on the page is only the first step. You also have to make sure that information is accessible to your users (especially in life-or-death situations like natural disasters.) Broken links make a site frustrating to navigate at best, impossible to use at worst.

Don’t Leave Anything Important Out

During a disaster, it’s important to make sure to translate ALL the information people will need to protect themselves.  The Florida Division of Emergency Management’s website should have included information about storm shelters in the most common Florida languages other than English.

But according to the Atlantic, while the site did offer weather updates in English, French, Spanish, and German, “try to find a shelter, and it’s English only: Somehow, the current translations have left Florida’s shelter-location list out.”

Or a Girl Scout. Either way, be prepared and try to make the most of the resources that are already available. For example, Translators Without Borders has been working with the American Red Cross to prepare for and respond to Irma.

They’ve been relying heavily on translation work done in previous disasters to create translation memories for use during Irma.  Both Harvey and Irma struck linguistically diverse parts of the country. As a result, the storms displaced a significant number of US translators. By reusing content where applicable, Translators Without Borders and the Red Cross can make the best use of the volunteers they do have available.

Vet Your Translators and Interpreters

And finally, one particular Irma-related incident reminds us of the importance of vetting your translators and interpreters to make sure they are actually fluent in the languages they’ll be translating or interpreting.

That might sound obvious, but apparently, it was not so obvious to officials in Manatee County, Florida.

County officials needed an ASL interpreter for their pre-Irma news conference. They should have used a professional ASL interpreter. Or at least someone who was actually fluent in ASL. Instead, they decided to conscript some random lifeguard with a deaf brother. The results were hilarious . . . unless you were a deaf Manatee County resident who hoped to get some useful information from the news conference.

Check out the video below, captioned for your enjoyment.

The highlight? Probably  when the interpreter signed, “Pizza want you are need be bear monster.”  Forget the hurricane, beware the bear monster!

Charlene McCarthy, the owner of VisCom,  a company that provides actual interpreters to Manatee County, told local station WPTV that “It was horribly unnerving for me to watch that, knowing I could provide a qualified, certified interpreter.”

Honestly, the deaf community of Manatee County might have been better served by an actual manatee. Sure, they have flippers instead of hands, but at least they’re cute and cuddly!

The Internet is laughing, but again, in a disaster, it’s crucial that the government can communicate with its citizens. And I’m not sure what that was, but it certainly wasn’t communication.

If you have something important to say to an audience that doesn’t speak English, K  International’s network of professional translators and interpreters is ready to be your voice in their language.

And if you’d like to help out with the ongoing translation needs of disaster victims all around the world, consider supporting Translators Without Borders.