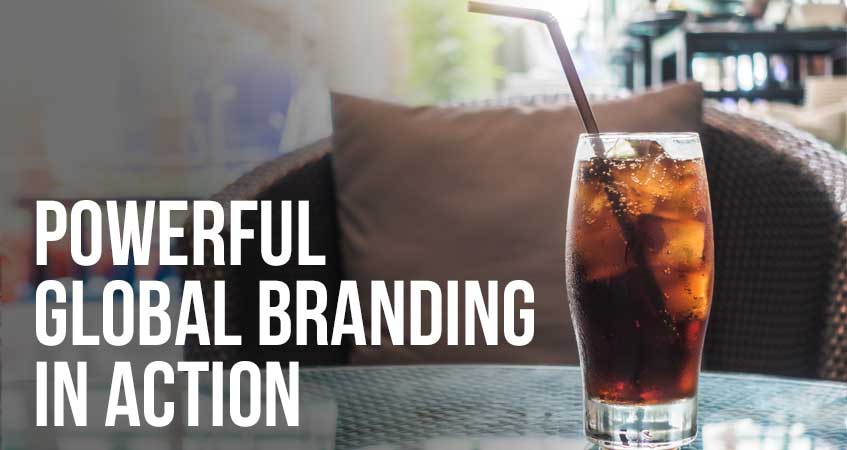 In the 1980s, only a handful of brands, such as Coca Cola and IBM, ruled the global stage. However, as the internet continues to lower the barriers to entering new markets, an increasing number of companies are able to achieve this level of influence.

Today, building a global brand requires a lot more than simply translating your website into different languages. The most successful companies understand that consistent and universally appealing messaging has to be combined with an understanding of local culture and tastes – a tactic that’s known as a ‘glocal’ strategy.

Here are five examples of powerful global branding in action.

When Airbnb was first launched, the brand faced a big challenge: convincing people around the globe that staying in a stranger’s home isn’t weird or scary. However, under the guidance of CMO Jonathan Mildenhall, the company has experienced remarkable global success – it now has listings in over 190 countries.

Key to Airbnb’s global strategy is localisation, with a dedicated localisation department responsible for making the site accessible around the globe, as well as local storytelling – essential for developing trust and a sense of community between hosts and travellers.

The brand has also introduced a universal symbol as its logo – the Belo – which symbolises ‘belonging’ no matter where you are in the world.

Arguably the most successful global brand of our time, we can all learn a thing or two from Apple. When it comes to its products, the company has opted for a one-size-fits-all strategy, with iPhone design identical regardless of region. And, whilst this can be a dangerous tactic, Apple’s minimalist and intuitive approach has resulted in products with global appeal.

However, the brand knows where this standardisation needs to end. The customer service protocol of each of its worldwide stores is tailored to suit local tastes and, despite having the same look and feel regardless of location, the content on the Apple site is carefully translated and localised for international audiences.

It’s impossible to talk about powerful global branding without mentioning Starbucks. With around 20,000 stores in 63 countries, the world’s most popular coffee house has made its mark from Brazil to China, where many thought it would fail to take off due to the cultural importance of tea drinking.

But what is it about the Starbucks brand that gives it such global appeal? The company has gone to great lengths to make sure that every Starbucks feels like a local coffee house, without losing brand consistency. For example, in China, a regional dislike for coffee was combatted with coffee-free drinks, whilst stores in Asia feature more adaptable seating arrangements to cater for larger groups.

The company was also a pioneer of consumer-centric digital strategy, with personalised perks on the Starbuck’s app including free birthday coffee. As a result, no matter where you are in the world, the brand never feels like an impersonal American corporate giant.

Coca-Cola is an old-hat when it comes to operating on a global level. However, the company has had to adapt to create a global brand that resonates with international audiences.

In the 1980s and ‘90s, when the company first emerged onto the global stage, standardised products and messaging resulted in a backlash against American imperialism. In response, Coca-Cola introduced its ‘think local, act local’ marketing strategy in 2000, with an aim to increase local sensitivity.

Since then, Coca-Cola has gone from strength to strength and is still one of the world’s most recognisable brands. Key to this success has been the company’s focus on enduring and universal values such as ‘sharing’ and ‘happiness’, as well as product and messaging localisation. For example, during the FIFA World Cup, each of the company’s international homepages featured local celebrities and cultural references, alongside the instantly recognisable Coca-Cola branding.

Founded in 1943 by Ingvar Kamprad, Ikea has become a globally recognisable brand, with stores all over the world, from Japan to Croatia. In part, this success can be credited to the company’s universally appealing brand attributes of low price, sustainability, form, function and quality.

However, as with all successful global brands, Ikea takes the time to understand its international audiences. In this video, Ikea’s Head of Research Mikael Ydholm explains how the company examines societal shifts around the world, as well as people’s perceptions of Ikea, to inform product choices.

Although they often retain the same elements, room sets will also vary from store to store to suit local customs. For example, in Japan, they will often feature tatami mats, a traditional Japanese floor covering.

Building a global brand is anything but simple – but with it being easier than ever before to enter international markets, it’s something that an increasing number of companies can achieve. The key is to find the right balance between global messaging and localised strategies.

Here at K International, our translation services can help your brand speak to its international audiences. From website localisation to marketing transcreation, our team can play a key role in your international branding strategy.

Tags: Apple Business
Previous Post Which Language Has the Most Words for Snow?
Next Post Merry Christmas 2015

1 thought on “5 Examples of Powerful Global Branding in Action”