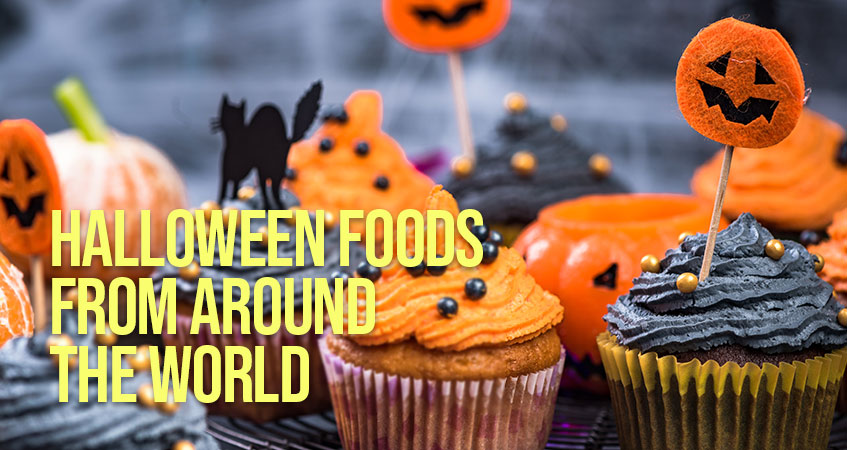 Halloween is around the corner, it’s time to get dressed up, carve pumpkins, watch horror movies… and indulge in your favourite Halloween foods.

Here are 5 traditional options from around the world, recipes included:

This orange, yellow and white candy is shaped like a corn kernel and is typically only available around Halloween, though candy companies have tried to market other colour and flavour variations for other holidays.

Candy corn was invented in the 1880’s by George Renninger of the Wunderle Candy Company.  For some reason, people have been buying it ever since. It’s mostly made of corn syrup and fondant, and it tastes about like you’d expect: not much flavour other than sugar. Apparently some people actually like it.

This year, candy manufacturers are expected to produce almost 9 billion pieces of the stuff, though it’s not clear how much of it is actually eaten versus how much goes stale at the bottom of trick-or-treating bags across the country.

If you can’t obtain candy corn where you are and I can’t dissuade you from trying it, this recipe from Alton Brown should do the trick.

Colcannon, made of mashed potatoes and greens like kale and cabbage, is a traditional staple for Halloween night in Ireland. Chew cautiously on Halloween, when it’s traditional to bake in a ring, a thimble, and small coins or other little prizes.  Getting the ring means you’ll get married in the year to come. Get the thimble, and it’s the single life for you. Coins signify wealth, as long as you don’t choke on them.

Barmbrack is an Irish version of fruitcake. Traditionally, charms were baked into the cake for purposes of divination, similar to colcannon.

Trying to determine what the next year will bring? This page has recipes for both colcannon and barmbrack.

“Soul cakes,” or little round cakes meant to commemorate the dead, used to be common in various European countries. The cakes would be left in offering to the souls of the dead on All Hallow’s Eve, and then given out to children and to the poor who went door-to-door offering songs and prayers for the deceased on All Soul’s Day.  The practice, called “souling,” is a prelude to the modern-day custom of trick-or-treating.

Italy : Fave dei Morti, or “Beans of the Dead”

In Italy, Fave dei Morti are served on All Soul’s Day. These creepily-named almond cookies (also referred to as Bones of the Dead) are shaped like fava beans, and they taste a bit like biscotti or a macaron. This traditional recipe includes booze.

Pan de muerto is traditionally eaten alongside altars made to deceased family members, or at their gravesites. This sweet bread is an essential part of Dia de Muertos’ celebrations, and is often festooned with decorative “bones” made of dough.  This recipe features orange zest and anise.