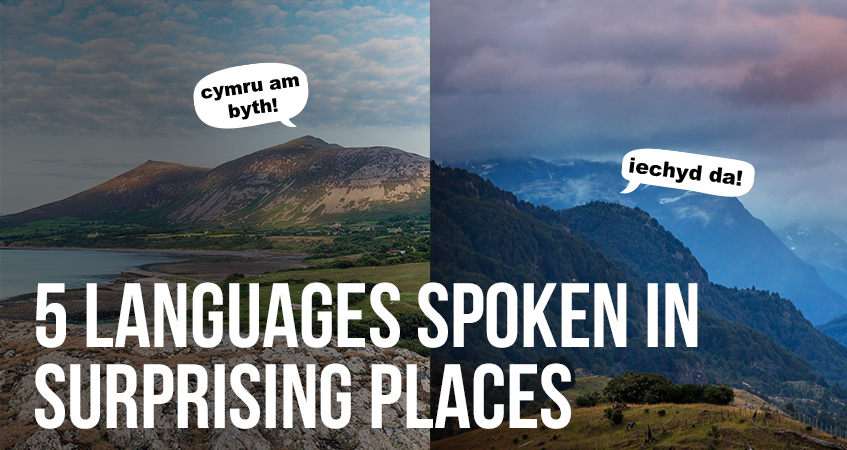 You expect people to speak Welsh in Wales, but what about in Argentina? Would it surprise you to find out there are entire Welsh-speaking communities in Patagonia? It’s true! Read on to learn more about five languages spoken in surprising places.

In 1865, a group of 153 Welsh settlers arrived in Patagonia. The home was on the other side of the world. They were at the ends of the earth. The colonists had little food, less water and only a single wheelbarrow to carry all their belongings.  Nonetheless, they made their way across 40 miles of almost-desert to the Chubut River Valley and founded the town of Rawson.  More Welsh settlers arrived, and by the end of the 19th century the Welsh colony in Patagonia, called Y Wladfa, had expanded all the way to the Andes.

The masterminds behind the colony wanted to create a “New Wales,” where Welsh language and culture could be preserved.  Of course, Spanish speakers and immigrants from other countries eventually moved in.

In certain parts of the US, German dialects are still the primary language of the “Plain People.” These are members of religious orders like the Amish, the Mennonites and the Hutterites who choose to separate themselves from modern society.

These groups came to the United States in the 18th century, fleeing religious persecution in Europe. Pennsylvania welcomed them. They settled there at first, though there are now Plain People communities scattered across the United States. Most speak “Pennsylvania German” or “Pennslyvania Dutch.” However, some groups speak other closely-related dialects, depending on where their ancestors came from.

Most of these families speak German at home. Children learn English when they start school.

These communities are almost like tiny countries unto themselves, completely different from their surroundings in both language and culture.

Portuguese may be the official language of Brazil, but in parts of the country, German has co-official status. For example, the state of Espirito Santo has three co-official languages: Portuguese, German and the Low German dialect of East Pomeranian. Originally spoken in Northern Poland, the East Pomeranian dialect has all but vanished from Europe but lives on in Brazil.

However, the most widespread German dialect in Brazil is Riograndenser Hunsrückisch German. It is spoken by approximately 3 million Brazilians of German descent. Starting in 1824, German immigrants set off en masse to Brazil, searching for a better life. Most of them were from the Hunsrück region and spoke the  Hunsrückisch dialect.

Over the centuries, Riograndenser Hunsrückisch has been influenced by the other languages that surround it and is now quite different from standard German. “Germanised” forms of Portuguese words and expressions are common.  For example, they say aviong for aeroplane, which is much closer to the Portuguese avião than the German Flugzeug. It also has a different spelling system that is closer to Portuguese, though this is a recent development and somewhat controversial.

The language of the sagas is rarely heard outside of Iceland. However, in the town of Gimli, Canada, it’s spoken right alongside English at HP Tercesen’s general store.  Gimli has been a destination of choice for Icelandic immigrants since the 1870s. Today, it is home to the highest concentration of Icelandic people outside of Iceland.  While English is the language of day-to-day life for most Gimli residents, more recent immigrants from Iceland are able to find plenty of other Icelandic speakers to converse with.

Every year, the town celebrates its Icelandic heritage with an Icelandic Festival.

The Catalan language is spoken mainly in the Catalonian regions of Spain and France. However, it’s also spoken in the town of Alghero on the Italian island of Sardinia, over a thousand kilometres away.

Why do the residents of Alghero speak Catalan when the rest of the island speaks Italian and Sardinian?  The answer goes back to medieval times.

In 1353,  the Crown of Aragon took over the town after capturing it from the Genoese. However, the citizens of Alghero proved unwilling to accept their new Aragonese overlords. After several revolts, the Aragonese were ready for drastic action. Their solution? Throw their unwilling vassals out and replace them with Catalan colonists. And so they did.

Today, 22.4% of the people of Alghero speak Catalan, despite the fact that it’s been Italian territory since the 18th century. Algherese Catalan has co-official status with Italian in the city.

Is your business communicating effectively with all potential customers? Whether due to history or to current immigration patterns, foreign language communities can pop up in unexpected places. The right translation services can help you reach all of your stakeholders in the language they feel most comfortable with.