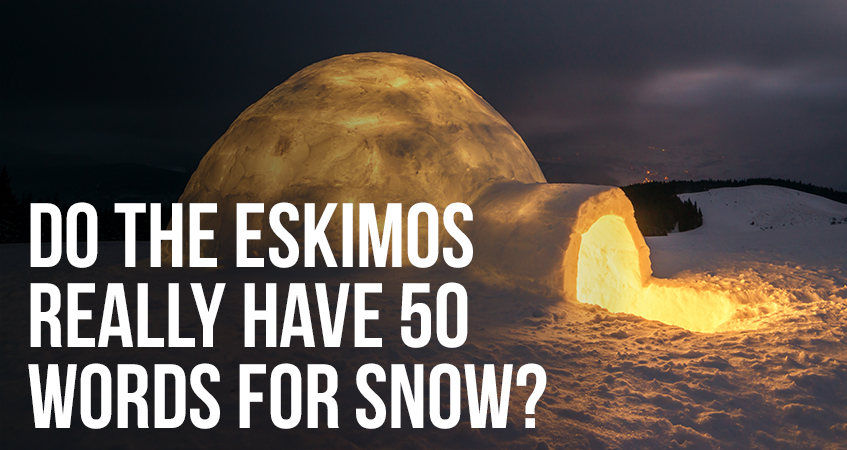 As Franz Boas travelled through the snowy landscape of Baffin Island during the 1880s on his quest to understand the Inuit people and their way of life, he became fascinated by the number of different words they used for the various types of snow, from piegnartoq, meaning snow that is firm enough for driving a sled on, to aqilokoq, meaning softly falling snow. His claim that there were more than 50 different words for snow was made in his 1911 publication A Dictionary of American Indian Languages and quickly became fixed in the public imagination.

Whether the claim is true or not, it led to a debate that has continued in linguistic circles ever since. Some of the confusion arises from the nature of Eskimo languages. Both Inuit and Yupik, the two main branches of the language, have many differing dialects, but they all have in common the feature of polysynthesis, which allows speakers to add a lot of information to a base word by adding suffixes. Information that would take a whole sentence in English can be communicated in a single (long) word. This makes the definition of words particularly difficult: does a base with various endings constitute different words or is it rather a single idiom with individual descriptive flourishes attached? Many linguists believe that the vocabulary lists compiled by Boas confused the two.

However, recent research undertaken by anthropologist Igor Krupnik at the Smithsonian Arctic Studies Center in Washington found that Inuit and Yupik languages do indeed have many different words for snow. He claims that Boas was careful to include only words with meaningful distinctions in his dictionary. Krupnik and other researchers studied the vocabulary of 10 dialects from both the Inuit and Yupik languages and conclude that there really are many more different words for snow than there are in English. The Inuit dialect of Canada’s Nunavik region has 53 words for snow, including pukak for powder snow that looks like salt crystals and matsaaruti for the slushy snow that is useful for icing a sled’s runners. In the other branch of the language, Central Siberian Yupik dialects have at least 40 such words.

In the hazardous Arctic environment, snow is not the only substance that requires such careful definition: the vocabulary used to describe sea-ice is even richer. The Inupiaq dialect of the Alaskan Inuits has around 70 words used to describe sea-ice, such as auniq, ice that contains holes like Emmental cheese, utuqaq, permanent ice that does not thaw from one season to the next and siguliaksraq, a layer of thin, crystalline ice that forms just as the sea begins to freeze.

It is not only the Eskimo peoples who have specialised words for the ice and snow of their surroundings: the Sami people of Northern Scandinavia and Russia have around 180 words that are used to describe snow and ice, according to Norwegian linguist Ole Henrik Magga. The Sami language is not polysynthetic so here it easier to define separate words. The Sami also have hundreds of words that are used to describe the reindeer that are central to their way of life. Linguists see this as no surprise: languages evolve to meet the needs of the people who use them and understanding weather conditions is crucial to survival in such a harsh environment. To understand whether snow and ice are safe to walk on or not can be a matter of life or death. Perhaps rather than wondering at the number of different words used in describing their environment, we should admire the Inuits’ expert knowledge of the snow that forms in various conditions.

As Inuits are increasingly turning away from the traditional Eskimo way of life, there is a danger that their ancestral knowledge may be lost and the rich vocabulary will fade away. This is why linguists are working to compile dictionaries of dialects in both Inuit and Yupik to encapsulate this knowledge so that local communities can understand their heritage and preserve it for future generations.

Previous Post Language and Translation News: 6 Stories To Read Now
Next Post Which Language Has the Most Words for Snow?