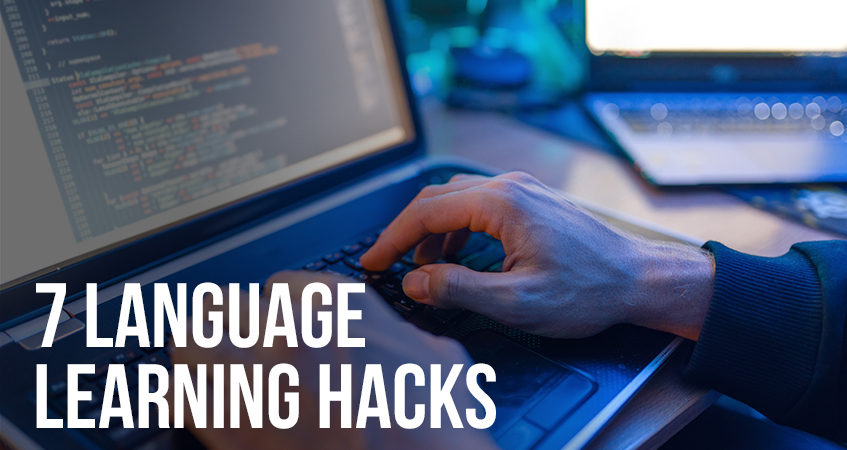 Many people wish to learn a new language. Few actually do so (at least in the English-speaking world).  What do successful language learners do differently? We won’t lie; persistance and determination is key. That said, these clever language learning hacks can make learning another language easier.  Why not give them a try?

Tap Into Your Inner Child

Children’s books, children’s shows and children’s songs teach basic vocabulary in a fun, easy-to-grasp format. If it’s a story or song you’re already familiar with, you might be surprised at how many words you can decipher on your own.

David Bailey, the CEO of Spotnight, didn’t know how to speak French when he arrived in France to stay with a friend. 17 days later, he was able to hold a conversation. As part of his language learning endeavor, he read Charlie and the Chocolate Factory in French. In a post on Quora, he said

“Reading the children’s books you read as a child is a great hack to learning new languages. Firstly, the language used is simple and secondly, knowing the story helps you to guess the meaning of new words and avoid using a dictionary. Surprisingly children’s books are more entertaining in a foreign language.”

Another bonus: children’s music tends to be ridiculously infectious.  I put on the Spanish version of “Bob Zoom” a couple of days ago for my toddler, and “Mi Pollito Amarillito” has been stuck in my head ever since.

Entrepreneur and internet guru Tim Ferriss is a big fan of the Pareto Principle: 80% of the results you get comes from 20% of the effort you put in. How does that apply to language learning?

According to Ferriss, you should focus on learning the most frequently spoken and most frequently written vocabulary words first. For example, he notes that 65% of all written English is made up of the same 300 words. So, learning just those 300 words gives you a tremendous head start!

Look For Cognates and Loanwords

This tip comes from Benny Lewis, an Irish author and “language hacker” who speaks seven languages fluently. (For more on Benny, see our interview here!) In an article for FourHourWorkWeek, he recommends checking for commonly used cognates and loanwords in the language you’re trying to learn.

“Cognates” are words that sound similar in both languages. For example, I’ll be you already know what “atención” means in Spanish.

Loanwords are words that have been incorporated from one language into another, though often with minor changes in pronunciation.

Beware of “false friends” or “false cognates,” though. These words may sound similar, but they don’t mean what you think they mean.

You can spend years memorising vocabulary lists, but to learn a language you have to practise speaking it. When? According to Benny Lewis, there’s no time like the present:

One of my more controversial pieces of advice, but one that I absolutely insist on when I advise beginners, is that you must speak the language right away if your goals in the target language involve speaking it.

Most traditional approaches or language systems don’t work this way, and I think that’s where they let their students down.

Use Spaced Repetition to Learn Vocabulary

Opera singer Gabriel Wyner has taught himself four languages to date, and wrote a book on language learning called Fluent Forever. One of his secrets is using “spaced repetition” to ensure he spends the most time practising the words he’s having the most trouble with.

A spaced repetition system uses flashcards (real or virtual), and organises them so that you spend the most time looking at the words you’re having difficulty learning. A tool called Anki makes it easy to set this up online.

Learn How to Listen with Minimal Pair Testing

The key to learning a foreign language? Never overlook an opportunity to practise – even if only in your mind. In fact, thinking in your target language is an important part of becoming fluent. So, as you go on throughout your day, tell a story about everything you see and do, in the language you’re trying to learn.

You can also practise writing by keeping a diary in your target language.

Ready to learn a new language? We hope these tips are helpful. Can you think of any other language learning hacks that have worked for you? Share them in the comments!