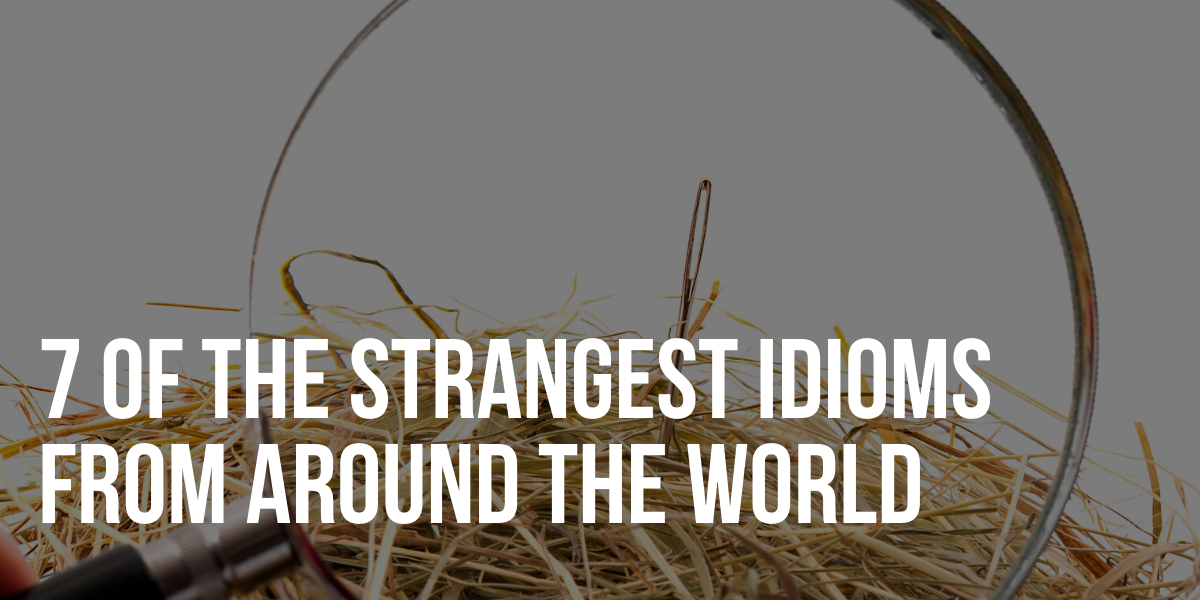 Idioms are commonplace in almost all languages. But what may seem a normal thing to say in one country, can seem utterly bizarre when translated into another language. Some of those translations are hilarious, whilst others are downright strange.

So whether the cat has got your tongue or something has really taken the biscuit, we’ve pulled together some of the world’s most interesting idioms and found out what they really mean in English.

Our first idiom comes from the Czech Republic which, as it turns out, has many interesting sayings when translated back into English.

Literal Translation: He needs it like a dead man needs a winter coat.

Ok, so it might not be clear initially why deceased individuals would be in the market for a winter coat. It turns out they aren’t, obviously because they’ve already popped their clogs (see what we did there?). The actual meaning is to demonstrate how obviously useless something is. Luckily, we have versions of this phrase in English, the most commonly used version runs along the lines of “as useful as a chocolate teapot”.

2. Defecating in A Blue Cupboard

Swedish is another language rife with idioms that, when translated literally, make little sense. This next idiom is certainly not doing anything to buck that trend.

Literal Translation: You’ve taken a poop in the blue cupboard.

This idiom never fails to raise an eyebrow! Mainly because people are curious to find out what on earth it’s referring to. It turns out this phrase is used to indicate you’ve made a fool of yourself with potentially negative consequences. The nearest English idiom would be “you’ve really put your foot in it now”.

3. Where Foxes Speak to Hares

It appears that German is another European language full of idioms. There are so many to choose from that we decided to opt for one that’s a little more left field.

Literal Translation: Where the fox and hare say goodnight to each other.

Once again, the phrase is utterly meaningless in English when translated literally. However, after a little research, it appears that this phrase is used to refer to a remote location. Apparently this is denoted by the fact that foxes and hares bid each other a good night. The English equivalent is probably best described as when someone “lives out in the sticks”.

4. Sauerkraut Doesn’t Provide the Best Surface for Riding a Bike

Next, we’re off to France to ride a bike. But not for the Tour the France, this time it’s for a widely used idiom.

Literal Translation: To pedal in sauerkraut.

Now, of course, the phrase doesn’t mean to literally take your bike and attempt to ride it through the finest sliced raw cabbage. Instead, it means something is incredibly slow going, or not getting anywhere. We often use a similar phrase “like wading through treacle” to make the same point.

5. Eyesight is a Mysterious Phenomenon

This idiom comes from much further afield; from Indonesia to be precise. It refers to one’s ability to see certain objects.

Literal Translation: A germ across the sea can be seen, but an elephant on the eyelid can’t.

Another idiom that makes little sense when translated literally, however, this phrase is quite profound when properly unpacked. The phrase refers to the fact that it’s easy to spot the errors of others no matter how small they are, but difficult to acknowledge your own shortcomings, even if they are very large. In English, this could be considered a blend of “that’s a bit rich coming from you” and “you need to look yourself in the eye”.

China is a country which is perhaps more famous for its proverbs than its idioms. However, there are still plenty to choose from, and we picked another idiom that involves animals.

Literal Translation: A crane among a flock of chickens.

So what does it mean if someone describes you in this manner? As it turns out that this is a very complementary idiom. It means that someone is “in a class of their own” or a “cut above the rest.” So if you are lucky enough to have this idiom bestowed on you, make sure to say thank you!

7. The Last Coke in The Desert

We round off our list of idioms by returning to Europe. This Spanish idiom may not signify what you might expect.

Literal Translation: You think you’re the last Coca Cola in the desert.

There are literally thousands of idioms out there, which is far too much to cover within this short article. However, we’ve picked some of our remaining favourites for the idiom fans amongst you:

Literal Translation: Stuff yourself with hay.

Literal Translation: A dog in church.

English Equivalent: “Look what the cat dragged in.” (unwanted guest)

Literal Translation: Dumplings instead of flowers.

English Equivalent: “Blowing your own trumpet.” (high opinion of your own achievements)

As you can see, languages aren’t always easy to translate – even when you know the meaning of each word contained within a phrase. Here at K International, we have been offering professional translation services in over 250 languages for more than 30 years. So if you need language services that you can rely on, don’t hesitate to get in touch with a member of our team today.