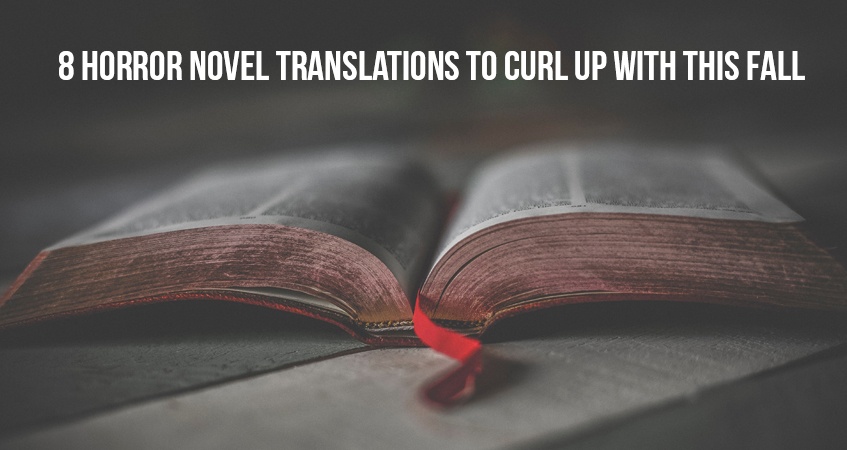 Halloween is over. But there’s still a month of fall left, and I, for one, am not quite ready to start celebrating the winter holidays just yet.  So, join me in keeping the Halloween spirit alive a little longer by curling up with one of these 8 horror novel translations.

Let the Right One In by John Ajvide Lindqvist

Translated from the Swedish by Ebba Segerburg

First published in Swedish in 2004, Let the Right One In is a classic vampire novel that’s been made into a movie. If you haven’t read it yet, there’s no time like the present!

The Crimson Labyrinth  by Yusuke Kishi

Translated from Japanese by Camellia Nieh

Did you like The Running Man? Then you’ll like this novel from Yusuke Kishi, in which unwitting contestants are forced to compete to survive the deadly Mars Labyrinth.

From The Hunger Games to Doctor Who, this premise has become quite common in our reality-TV obsessed era.  But this is an especially well-done example, with 4.5 stars on Amazon and 3.7 stars on Goodreads.

And Unbound Worlds recommended it as one of the best novels for readers who are just beginning to dip their toes into Japanese horror.

The Blind Owl by Sadegh Hedayat

Translated from Farsi by Naveed Noori

This novel was first published in 1936, and it’s been called “the most important work of literature to come out of Iran in the past century.” Hedayat’s novel has been compared to the works of Edgar Allan Poe. Just as in Poe’s “Ligeia” and “Berenice,” in The Blind Owl readers get a front-row seat as the unreliable, opium-addicted narrator spirals into madness.

Translated from Catalan by Martha Tennent and Maruxa Relano

In Sebastia Alzamora’s Blood Crime, the narrator is a vampire. But the real horror is the Spanish Civil War.  The New York Times Book Review calls it “beautifully translated from the Catalan by Maruxa Relaño and Martha Tennent” and says “It’s akin to poetry.”

That said, not everyone agrees. Some readers found the plot to be too slow-moving and convoluted.

Translated from French  by S.E. Battis

A socially awkward librarian teams up with a vampire in this novel from French author Aurélie Venem. Brought to you by Amazon Crossing, this book has amazing reviews. Even most of the one-star reviews are from readers who are mad that the remaining books in the trilogy haven’t been translated yet!

I have to admit, the plot synopsis didn’t excite me But all the glowing reviews are hard to ignore.

Another by Yukito Ayatsuji

What’s worse than having to start a new school in the middle of the year? Being placed in the “cursed class” with a vengeful ghost, like the narrator of Another. This novel has also been made into a manga and an anime version, but reviewers recommend starting with the novel first.

Translated from the Japanese by Kathleen Taji

In this Lovecraft-inspired novel from Japanese author Asamatsu Ken, a mummified teenage girl from the Shang Dynasty is discovered in a tomb. But her DNA is not entirely human. And you know what they say – “That is not dead that which can eternal lie.”

Translated from Dutch by Nancy Forest-Flier

In the tiny town of Black Spring, nobody ever leaves.  The town is haunted by the Black Rock Witch, and the town leaders use high-tech surveillance to keep the inhabitants inside and to keep outsiders from finding out about the secret.

But there are no secrets in the age of social media.

Hex won the Hugo Award in 2015, after which it was translated into English. But Olde Heuvelt did more than just translate it- he completely localized it for an English-speaking audience, moving the setting to the United States and changing character names and plot details before letting translator Nancy Forest-Flier have a go.

Olde Heuvelt described his decision in a post on the Tor/Forge blog:

To thoroughly scare readers, you have to create a perfect sense of familiarity in a story and then rip it to pieces as soon as they’re hooked. And here’s where the Dutch setting becomes problematic. If I’d read a horror story set in, say, rural Azerbeidzjan, I’d be worrying all the time about what the place actually looks like, what’s the norm for these people, what are they scared of and oh, by the way, how do you even pronounce their names? Bang! Familiarity gone, and a missed opportunity to make me scream at night.

This applies to business content, too, especially marketing and advertising campaigns that use emotion to inspire action. And if you’re looking for expert marketing translation, localization or transcreation, get in touch. We’d love to hear from you!

Do you like scary stories? What’s your favourite horror novel? Let us know in the comments!