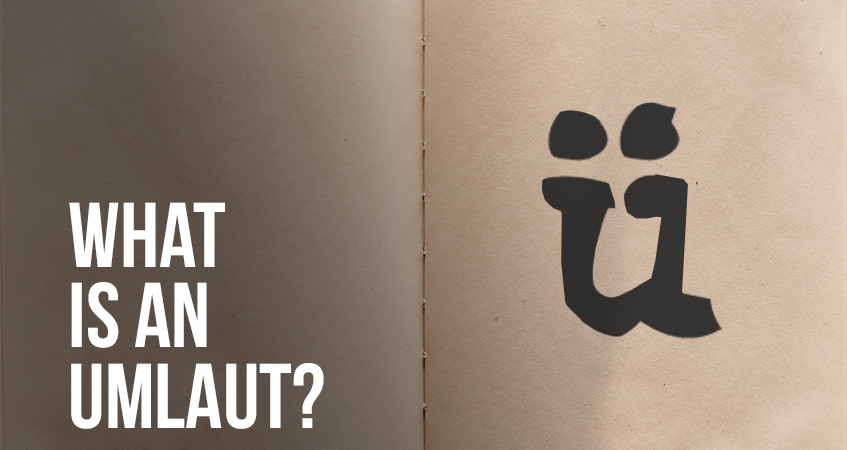 Have you ever wondered why some letters in languages like German have those funny dots above them? Do they have a purpose? And if so, what is it?

Fear not, we’re here to help! Those little dots are called umlauts. Here’s a brief history to explain what they are, why they exist and what they mean.

What is an umlaut?

In linguistics, an umlaut is “a sound change in which a vowel is pronounced more like a following vowel or semivowel.” Languages change over time. And since people are inherently lazy, these changes are often motivated by a desire to reduce the amount of effort needed to create a given sound.  Hence, the umlaut.

In German, the umlaut punctuation mark is used to indicate this sound shift. In medieval times, scribes indicated umlauted vowels by placing a small letter “e” directly above them. Over time, the “e” evolved into 2 bars, and then finally into two dots.

German orthography includes ä, ö, ü as “special characters.” They aren’t considered part of the alphabet in their own right. But they’re still important.

So, what do they sound like? If the words “vowel fronting” don’t mean anything to you, this handy YouTube video should clear up the confusion:

Umlauts Are Kind of a Big Deal

How much of a difference can two little dots make, anyway?

More than you might think, in languages that use them.

For example, in German, it’s the difference between mother (Mutter) and mothers (Mütter), and between already (schon) and beautiful (schön).  Umlauts change the pronunciation and meaning of words- they are definitely not just for decoration!

Which languages use umlauts?

Aside from German, the following languages use umlauts for sounds similar to umlauted letters in German:

That said, dots above a letter are not necessarily umlauts. Umlauts are visually identical to another punctuation mark called the diaeresis, which evolved separately and indicates a different type of sound change.

We use the diaeresis occasionally in English, in words like naïve.

Umlauts as Decoration: Haagen-Daz and the Metal Umlaut

Of course, in languages like English, umlauts are not common. They look foreign to us, and they are sometimes added to words to make them look foreign, too.

For example, the Häagen-Dazs brand of ice cream is actually American.

The name was invented to look and sound “Danish,” even though Danish doesn’t use an umlaut. The word “Häagen-Dazs” doesn’t mean anything at all, in Danish or any other language. It’s just random syllables strung together.

And of course, we can’t overlook the “metal umlaut.” It’s what makes Motörhead Motörhead, after all. Why did metal bands start adding random umlauts to their band names?

According to Rolling Stone, it all started with Blue Öyster Cult. That umlaut was the brainchild of the band’s original manager and producer Sandy Pearlman, along with rock writer Richard Meltzer:

But was it Motörhead that turned this random bit of punctuation into a metal institution.  To quote Motörhead’s Lemmy, via Rolling Stone:

“I thought it looked mean. That’s the thing, innit?” In another interview, Lemmy said, “I pinched the idea off Blue Öyster Cult. Then Mötley Crüe pinched it off us and it goes on and on.”

The Umlaut, Lost in Translation

As you might have guessed, the “metal umlaut” sometimes gets lost in translation. For example, as Wikipedia observes, umlauted vowels actually sound weaker than vowels without the umlaut. So, “in languages like German which use it normally, the umlaut does not evoke the impression of strength and darkness which its sensational use in English is intended to convey.”

Then, there’s the matter of pronunciation. “Metal umlauts” aren’t supposed to affect how a word is pronounced. And that works fine in English-speaking countries. Nobody knows what to do with them, so everyone ignores them.

But when a band gets a global audience, confusion reigns. For example, Vince Neil of Motley Crue told Vanity Fair,

“[W]e put some umlauts in there because we thought it made us look European. We had no idea that it was a pronunciation thing. When we finally went to Germany, the crowds were chanting, “Mutley Cruh! Mutley Cruh! “ We couldn’t figure out why the f*** they were doing that.”

Meanwhile, Geoff Tate, the lead singer of Queensrÿche, explained, “The umlaut over the ‘y’ has haunted us for years. We spent eleven years trying to explain how to pronounce it.”

Most international metal fans probably get the joke by now. But if you’re not a metal band,  we urge you to think twice before randomly adding foreign punctuation to your business name.

Typesetting with umlauts can require some creativity, especially when translating text from a language that doesn’t typically use them. As the “Fonts in Use” blog observes, “As soon as there is some accent or umlaut, graphic designers can’t use tightly spaced lines of all-caps. Or they are forced to tinker their own compact glyphs.”

Fortunately, at K International we have a multilingual desktop publishing team available to make your text look good in every language, umlauts and all!

2 thoughts on “A Brief History of the Umlaut”