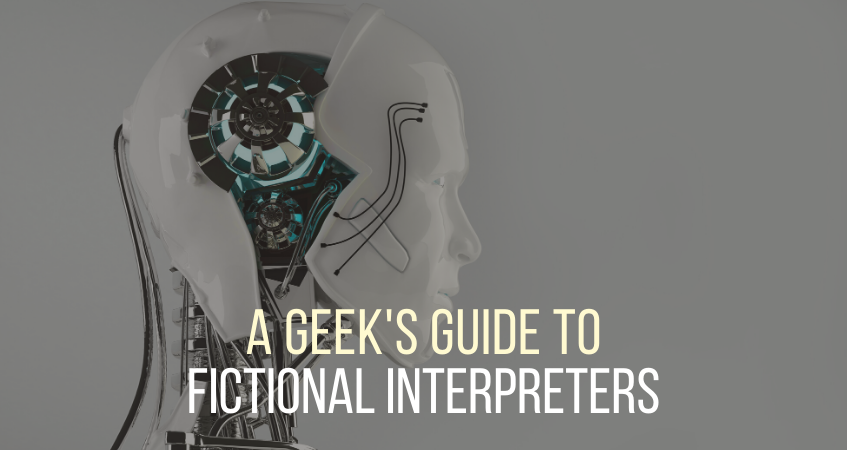 Good science fiction and fantasy stories take us to new universes with new cultures…and that usually means new languages, too. That’s why invented and constructed languages are on the rise. In these fantasy worlds, interpreters and translators often play an important role. Here are some of our favourite fictional interpreters:

Missandei, Game of Thrones and A Song of Ice and Fire

“Eleven years of age, yet Missandei is as clever as half the men at this table and wiser than all of them.” — A Dance with Dragons

Interpreter Missandei is a compelling character in both the A Song of Ice and Fire books and the TV show.  That said, she’s almost a different character in the books than she is in the show.

In the books,  Missandei is very young, only ten years of age when Daenerys overthrows the “Good Masters” of Astaphor.  She speaks at least three languages: the Common Tongue of Westeros, High Valyrian and Bastard Valyrian.  She is a slave, serving as an interpreter because of her linguistic skills.

Despite her age, she quickly becomes one of the queen’s closest confidantes and advisors, serving as her herald and interpreting when needed. After Daenerys disappears, she helps Sir Barristan Selmy overthrow Daenerys’ shady Meereenese husband to rule in her place.

In the show, Missandei is quite a bit older and played by Nathalie Emmanuel. She speaks 19 languages fluently, helps save Daenerys from an assassination attempt, and helps Grey Worm and Tyrion govern Mereen after the queen disappears.

Which version of Missandei do you prefer? We think she’s awesome either way!

“Lt. Uhura is unmatched in xenolinguistics, we would be wise to accept her conclusion.” –Spock, Star Trek (2009)

Thanks to Star Trek’s universal translator, you don’t often get to see Uhura’s linguistic skills in action in the original series. That said, you don’t become communications officer on the starship Enterprise without being an expert in alien languages. In the 2009 film Star Trek,  Uhura’s skills in Romulan and Klingon are a crucial part of the action.

Plus, Uhura was one of the first African American characters to be given an equal role in an American TV series -not a maid, not a servant, just another character.  That’s a big deal.

The TARDIS, Dr. Who

The TARDIS uses a telepathic field to interpret and translate languages for the Doctor and his companions. That sounds closer to machine translation than human interpreting…but since the TARDIS is sentient and has her own personality, I’m including it here. The TARDIS can interpret almost any language in the universe unless it is very, very old.

It also has a sense of humour. For example, when Donna tried speaking Latin in Pompeii, the TARDIS translated it into Celtic for the natives.

Babelfish, Hitchhiker’s Guide to the Galaxy

” Meanwhile the poor Babel fish, by effectively removing all barriers to communication between different cultures and races, has caused more and bloodier wars than anything else in the history of creation.”

In The Hitchhiker’s Guide to the Galaxy, the Babelfish is a small yellow fish that translates any spoken language the person wearing it happens to hear. We might like to think that as translators and interpreters we help bring different cultures together, teach the world to sing in perfect harmony and all that. Unfortunately, since the Babelfish interprets with absolutely no filter, it does not help different races coexist peacefully. Rather, it inflames intergalactic tensions by making it possible to hear just how rude other people are being.

“Don’t blame me. I’m an interpreter. I’m not supposed to know a power socket from a computer terminal.” — Star Wars, Episode V: The Empire Strikes Back

He’s gold, he’s shiny and he’s fluent in over six million forms of communication. C3PO  has always been one of the best Star Wars characters.  He and his companion R2D2 are the only characters to appear in all seven of the films.

As a protocol droid, C3PO is literally built for interpretation and translation. He can understand and interpret almost any language, from R2D2’s chirps and beeps to the guttural sounds of Huttese. Of course, he’s also programmed to understand etiquette and customs across different cultures.  He’d be the perfect droid to translate your business content – as long as it isn’t supposed to be funny.  He’s probably a bit too much of a stick in the mud to effectively translate humour or anything “edgy.” When he’s not translating, his main function is to provide unintentional comic relief.

This list is by no means comprehensive. If I’ve left out your favourite fictional interpreter, please let us know in the comments!