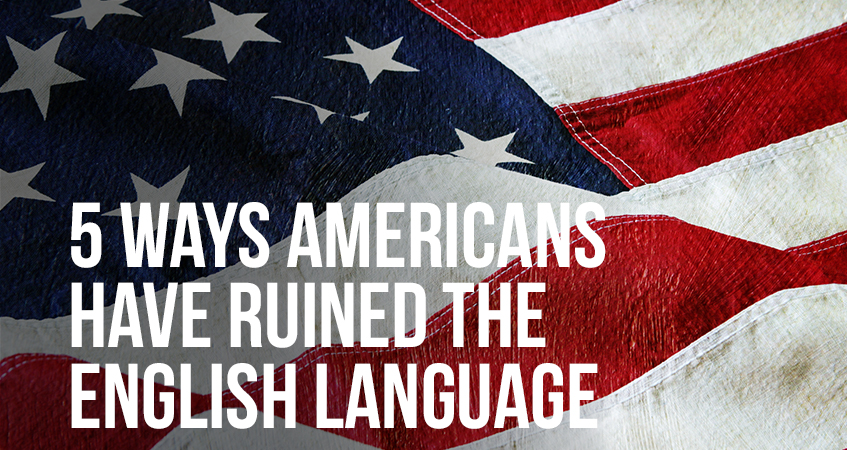 July 4th is Independence Day in America. It’s been 241 (plus) years since that bunch of ungrateful colonists declared independence. You’d think we’d have learned to speak English properly by now.

Yeah, not so much. Here are 5 ways Americans are ruining the English language:

Americans have long been guilty of spelling abuse.  Thanks to 19th-century reformer Noah Webster,  we’ve dropped the original and proper “u” from words like “colour” and “favour.” And we’ve lost the “a” from words like “orthopaedics”.

But we’ll add these missing letters back at random, whenever we want to appear more sophisticated.

Come on, America, was it really that hard to write one extra letter?

Apparently, the answer to that last question is “yes.” Yes, it is.  Now, don’t get me wrong. Abbreviations have always been a part of how the English language evolves.  For example, consider words like “fab,” “babe” and “delish.”

But these kids today, man! They’ ve taken it to a new, and frankly ridiculous extreme. Or perhaps that should be “ridic.” Anyway, “words” like “obvi” (obviously) and “spesh” (special) appear to be taking over English, part of a trend some linguists have dubbed “totesing.”

This trend has spread to English-speaking millennials around the world, but at least one linguist who studies the phenomenon blames America for it. More specifically, California. Researcher Sravana Reddy told NRP that “It might have originated in that area and spread over because of Hollywood and TV.”

And as much as “obvi” makes me want to scream “Get off my lawn!”, apparently, the current wave of crazy-making abbreviations may have started with “hella.” Which means that younger me was part of the problem.

Vocabulary has long been one of the main ways Brits and Americans are “divided by a common language.”

Just for fun, try asking an unsuspecting American, ” Can I borrow a rubber? I promise to give it back when I’m done!”

Other, less embarrassing differences include American’s curious insistence on calling the “boot” of the car a “trunk” and referring to “trousers” as “pants.”

Is this really ruining English? Some would say “yes.” Including the Prince of Wales, who complained in  a 1995 British Council meeting that “‘people tend to invent all sorts of nouns and verbs and make words that shouldn’t be.”

Nor is this a new complaint. And all too often, these Americanisms become part of the dictionary in England, too.  For example, in 1832, the poet Samuel Coleridge was appalled at a”vile and barbarous” new adjective that had recently been imported from America.

The word in question? It’s hard to believe now, but it was “talented.”

Another way Americans are often accused of ruining the English language is through “verbing.” “Verbing” involves taking perfectly good nouns like “impact” or “dialogue” and turning them into verbs.

Of course, this isn’t a new practice. It’s not strictly an American practice, either. For example, Shakespeare converted nouns to verbs with abandon.  But it’s gotten a bad rap, perhaps because it often sounds pretentious.

Today, this tendency is especially notable in American business culture.  As Christopher Steiner noted in Forbes,

Business clichés have long been allowed to proliferate, multiply and slink around like evil gremlins within the American business establishment.

And the American refusal to respect the proper parts of speech isn’t limited to nouns and verbs, either.  For example, in a 2012 article, the Daily Mail weighed in against the American word “drive-thru”:

Drivethru might be the worst of all possible words. It takes a verb and a preposition, and screws them together (Americans love doing that: walkup, stopover, hangout). Then it mangles the spelling.

Finally, it applies this hideous, mongrel expression to a place where the food isn’t fit for dogs.

As Matthew Engels observed, thanks to the ubiquity of American pop culture, metaphors that make a lot more sense in America have migrated over to England. For example, people in the UK often find themselves using baseball metaphors like “out of left field” and “home run,” even though the sport itself is not nearly as popular there.

In reality, every language with speakers in more than one country has variations like this.  America isn’t even the only country to have its own mutant form of English. Australia, Canada, and New Zealand have their own variations on the language (See The Different Types of English for more examples of how English varies from country to country.)

And of course, there’s Spanish as it’s spoken in Spain versus Latin American Spanish. Or Portuguese versus Brazilian Portuguese.

It’s just one more reason businesses shouldn’t trust translation and localization jobs to just anybody. A reputable language services company will ensure that your translations take local language variations into account and your business speaks your customers’ language the same way they speak it.

Happy birthday, America! Which Americanisms do you love? And which do you love to hate? Let us know in the comments.

6 thoughts on “5 Ways Americans Have Ruined The English Language”