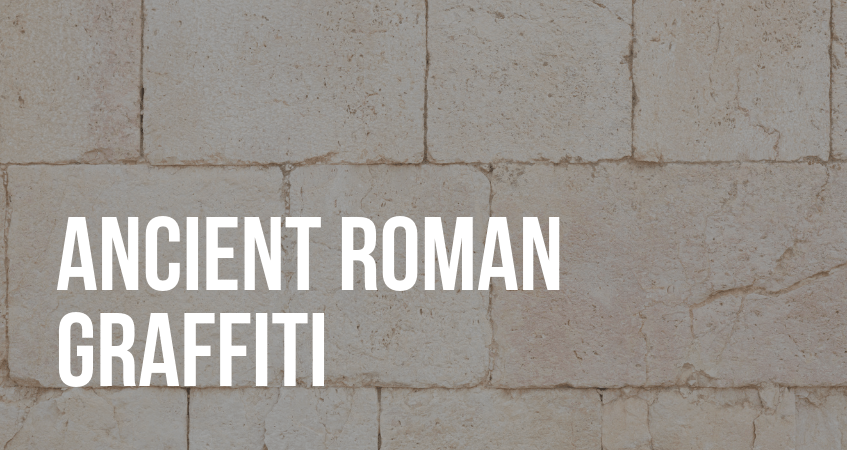 You might think of graffiti as a modern urban problem, but rest assured, writing on walls is an ancient art. Our forebears liked to make their mark on a place just as much as we do. Perhaps even more so, considering that they often had to chip away at stone walls to do so.

Translating graffiti inscriptions can lead to some interesting insights into the people and the cultures that created them. When it comes to ancient Rome, for example, we primarily learn that the Romans had dirty, dirty, minds.  Here, via Pompeiana, are 5 funny inscriptions from the ancient Roman city of Pompeii, translated for your amusement:

Words of Wisdom from Pompeii

Scholars found this inscription scrawled on a wall in Pompeii: “The one who has sex with a fire burns his penis.” Hard to argue with that…

This is also from Pompeii: “We have wet the bed, host.  I confess we have done wrong. If you want to know why, there was no chamber pot.” Makes you wonder why this particular apology wasn’t delivered in person. If I were to have a bed-wetting incident-at someone else’s house, no less- I certainly wouldn’t want it recorded in stone.

This was found in the gladiator barracks: “ Floronius, privileged soldier of the 7th legion, was here. The women did not know of his presence. Only six women came to know, too few for such a stallion.” Uh-huh. Keep telling yourself that, buddy.

This cheerful little inscription was found in a bathroom: “To the one defecating here.  Beware of the curse.  If you look down on this curse, may you have an angry Jupiter for an enemy.”  Umm, have a nice day?

Apparently, at least one Roman citizen gazed upon the obscenity-laden walls of his fair city and wished for something more: “O walls, you have held up so much tedious graffiti that I am amazed that you have not already collapsed in ruin.” Well, everyone can’t be Shakespeare.