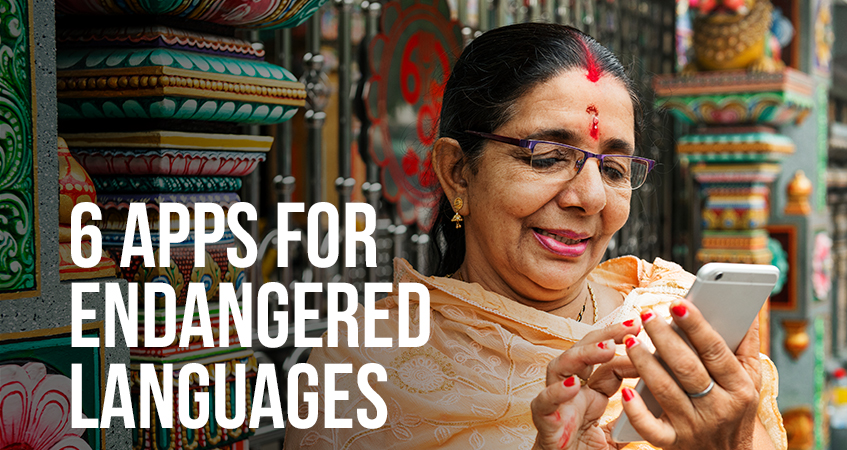 By the end of this century, linguists expect more than half of the languages in the world to die. It’s a bleak statistic, especially given how deeply language and cultural identity are bound together. But linguists, language activists and the people who speak endangered languages are fighting back.

Language: Iwaidja, an indigenous Australian language. There are only about 150 Iwaidja speakers left, although children are still learning it. This app serves two purposes:

Find it on iTunes here and Android here.

The Tusaalanga app for iOS teaches 5 Nunavut Inuktut dialects, with grammar lessons, glossaries, sample dialogues and audio files for each.

The app is available for Android, but the development has stopped. The Aikuma Project plans to re-release it as a web app.

Chickasaw Language Basic is a key piece of a decade-plus long effort to revive the Chickasaw language.  The last person to speak only Chickasaw, Emily Johnson Dickerson, died in 2013.  There are around 600 tribal elders who speak it fluently. UNESCO classifies it “severely endangered.” Ethnologue considers it “moribund.”

But language revitalization efforts have been surprisingly successful. Led by tribe member Joshua Hinson, digital efforts including online TV shows and social media campaigns give younger generations a chance to hear the language of their ancestors.

And there’s an Apple app, Chickasaw Language Basic, that teaches the Chickasaw alphabet along with basic words, phrases, and grammar. According to an article first published on

The app was an instant hit. As young people began showing more interest in learning to speak Chickasaw, they sparked their parents’ interest too. . . Hinson observed that some families began labeling household items with their Chickasaw names to encourage everyone to use their heritage language, even if just in passing.

Languages: Over 100 indigenous languages from around the world, including Canada, New Zealand, and the USA.

One of the biggest problems faced by minority and indigenous language is a lack of software support.  We live so much of our lives online these days.  If people can’t take their languages online too, they risk losing them. But some languages don’t use the Roman alphabet, or they include special characters that are difficult or impossible to produce on a mobile device.

The First Voices Keyboard app allows users to type their own languages in their own alphabets on iOS and Android. They also have a chat app for texting in the same languages, and several apps that teach indigenous languages like the Shuswap language of British Columbia.

Memrise isn’t really a language app, per se. But it allows users to create their own online courses.  So, language preservationists for endangered languages like Sami and Kristang are using it to teach their language to others.

For example, a group of young Ume Sami from Sweden are using the app to document their language, which is one of the 10 most endangered languages in Europe. There are only 10-20 fluent Ume Sami speakers left.

As the Guardian notes,

Using the app as a learning tool has distinct advantages. Firstly, it connects the speakers to each other. . .Where Ume Sami learning and conversation is taking place, it is in small, informal groups and very dependent on voluntary community efforts. The app has the potential to bring together these individual efforts into a collective, tangible resource. Secondly, it could potentially plug glaring gaps in formal teaching and access to learning resources in the Swedish education system.

The effort to revive the Kristang language of Malacca and Singapore also includes a Memrise course that teaches basic vocabulary, phrases, and grammar to people who wish to learn the language but don’t live in Singapore.

Of course, it will take more than apps to stem the tide of language loss. But anything that makes the digital world accessible to marginalized languages is helpful.  (And that includes translating websites, marketing materials and more into local languages. We can help with that!)

What apps did we leave out? Let us know in the comments!