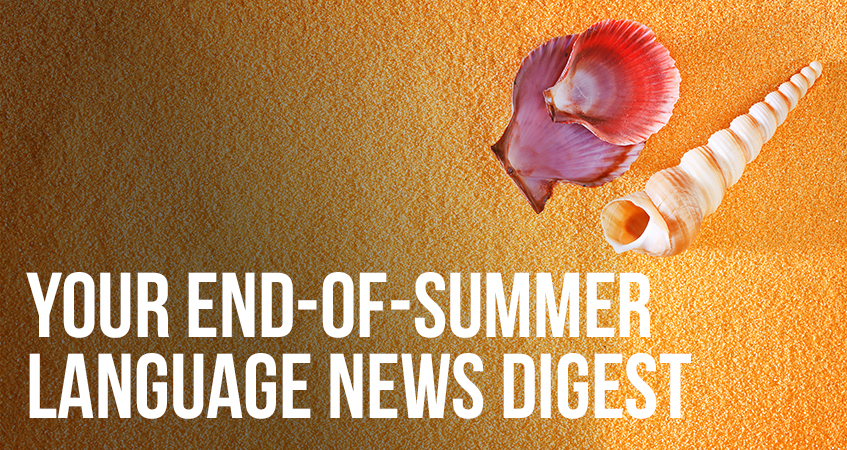 And just like that, summer is over.  Feeling left behind? Here are 7 interesting stories about language and translation to keep you in the know!

So, this week Britney Spears released a new album. One of the songs, “Coupure Electrique,” is sung entirely in French. How sophisticated! Except she obviously didn’t get a French translator to help with the lyrics. To quote Bustle,

“The French lyrics in this track are not actually grammatically correct, so a direct translation would result in English lyrics that actually don’t really make that much sense.”

But if you’re interested in what she’s trying to say, Bustle does a good job of trying to parse the lyrics into understandable English.

Spanish Translation of the Miranda Warning

If you’ve watched an American cop show, you’ve heard it: The Miranda warning, which warns suspects being placed under arrest that they have the right to remain silent, the right to an attorney, etc.

But if what if the suspect doesn’t speak English? The US now has the world’s second-largest population of Spanish speakers. Only Mexico has more. But until this month, the US did not have a standard translation of the Miranda warning. And that has caused all sorts of problems. According to Vice, there have been “dozens of instances of bad translations, including the use of Spanglish, and completely made-up Spanish words like “silento.” (The Spanish word for silent is “silencio.”)

Finally, a half-century after the Miranda warning became the law of the land and standard police operating procedure, the American Bar association has voted to create a standard Spanish-language Miranda warning.

Just in case you needed another example for why it’s foolhardy to rely too heavily on machine translation with no human oversight: This week, Microsoft’s Bing search engine auto-translated “Daesh,” an acronym for the Islamic State, into “Saudi Arabia.” The translation error was fixed with hours of it being noticed and publicised. Even so, outrage predictably (and rightfully) ensued.

Microsoft believes that the error is most likely the result of Bing relying on crowdsourced translations.

Speaking of crowdsourcing, Google just released an app callled Crowdsource that allows users to perform the quick translation and transcription tasks to improve the quality of Google’s services.

What do users get out of this? According to Techcrunch, the Internet giant is basically expecting them to do slightly annoying microtasks for free, receiving only the knowledge that they’ve ” “made the internet a better place for your community” in return.

How well do you think this will work out for Google? I don’t think they inspire the same warm fuzzies that fuel the volunteer translation community at TEDTalks or even Facebook, but we’ll see.

Tesla had to alter the Chinese translations of some of its marketing materials to clarify how its “autopilot” feature is intended to be used. Apparently, some Chinese customers were getting the impression that the car steers itself. That led to a minor accident when someone went “Look ma, no hands!” and sideswiped another vehicle. Oops!

“We hope to clarify that it is a driving-assisting function and hope people can use it in a correct way,” Tao said. Tesla has always asked its users to use Autopilot with both hands on the wheel since introducing the feature last year, he said.’

This story shows just how important marketing translation can be. Get it right the first time!

English Translations of Ancient Egyptian Texts Will Soon Be Available

An important collection of Ancient Egyptian texts will soon be published in English translation for the first time ever.  The book, which consists of stories, letters and inscriptions taken from papyri, the walls of the pyramids and other artefacts, is being released by Penguin on Wednesday.  It is the first book in English to make ancient Egypt’s rich literary tradition accessible to modern-day English speakers.

According to Toby Wilkinson, the Egyptologist who translated the texts and compiled the anthology, prior to this “there was a missing dimension in how ancient Egypt was viewed: “The life of the mind, as expressed in the written word.”

Lack of interpretation services can have some particularly nasty consequences for immigrants and travellers alike. One poor Chinese tourist visiting Germany was mistaken for an asylum-seeker after his wallet was stolen. The poor gentleman was detained for almost two weeks until a local Chinese restaurant owner consulted by officials at the refugee home he was being kept at recommended a smartphone translation app.

As Christoph Schlütermann of the German Red Cross explained to The Guardian:

“He spent 12 days trapped in our bureaucratic jungle because we couldn’t communicate,” he said. “Germany is unfortunately an extremely bureaucratic country. Especially during the refugee crisis I’ve seen how much red tape we have.”

What are your favourite language and translation stories from this month? If there’s anything we missed, feel free to share it in the comments!