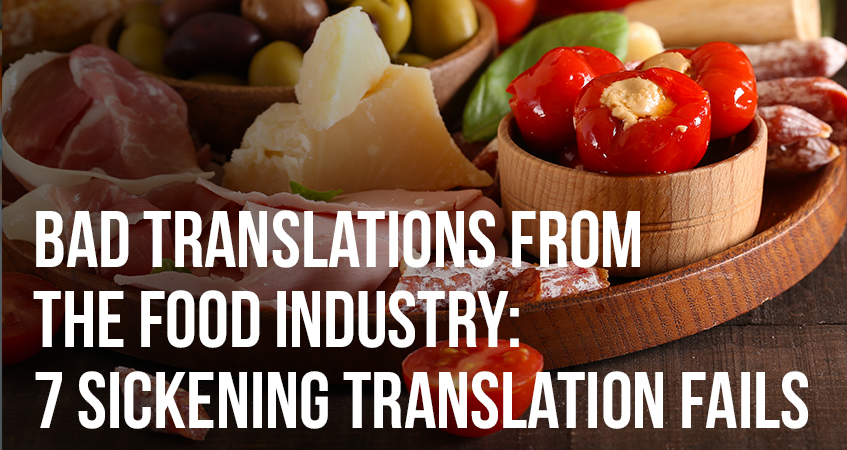 Bad translations are bad business.  You might think it doesn’t matter that much if a translation is perfect. Google Translate is good enough. Hey, it’s free! They’ll get the idea, right? Wrong. Bad translations not only make your company look stupid, they can also insult, offend or even disgust your potential customers. To prove it, here are 7 food industry translation fails guaranteed to make you sick to your stomach.

*Disclaimer: K International obviously had nothing to do with any of these translations.**

Bad Translations From the Food Industry: Smell of What?!? 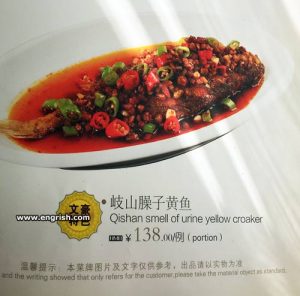 Why would anyone want to order fish that smells like pee? As it turns out, “Quishan smell of urine yellow croaker” is a common but unfortunate translation for “Qíshān sàozi huángyú 岐山臊子黄鱼,” a popular Chinese seafood dish. The picture above is one of several different photos circulating online with the same translation.

There’s got to be an explanation for this, right?

Yes! According to Language Log, the Chinese word “sàozi” can have several different meanings depending on tone. One of those meanings is, in fact, “smell of urine.”

But that’s not the correct meaning in this context, of course. Here’s a better translation, again courtesy of Language Log:

“It turns out that sàozi 臊子 is a type of sauce made from minced pork cooked with vinegar, red pepper, and many other seasonings. So a better translation would be “yellow croaker with minced pork sauce à la Qishan”.

That sounds much more appealing!

Bad Translations from the Food Industry: Not Everything Tastes Better Fried… 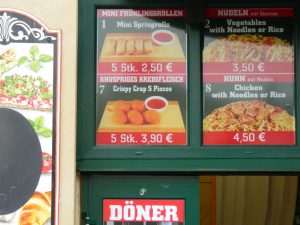 It’s amazing, the difference that a single letter can make.

This gem comes courtesy of an unnamed restaurant in Vienna. Apparently, they meant to say “crispy crab.” This may be more of a typo than a true translation error. But, it’s so glaringly obvious that any halfway fluent professional translator would surely have caught it before it went live. 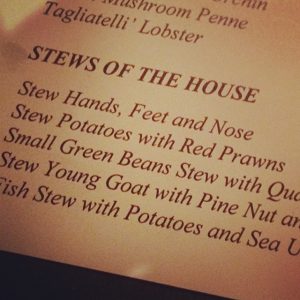 “Stew of hands, feet and nose” sounds like something the witches from Macbeth might serve to unsuspecting guests. But according to the photographer, this is an “Actual menu in a very upmarket restaurant in Madrid. Who uses a bad translation company for its English menu.”

Some rights reserved by marcberryreid 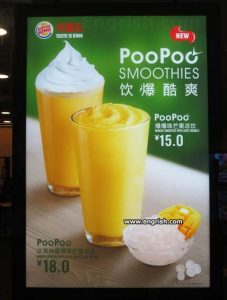 Most of these translation fails are probably courtesy of automatic translation services like Google Translate. But not this one. This delightful sounding smoothie was sold by none other than Burger King. And according to Business Insider, they actually paid an agency for the crappy translation:

“In an email, the fast-food chain said the product’s actual English name is ‘Mango Smoothie with Juicy Bubble’ and that the alternative moniker, dreamed up by a creative agency, was ‘an element of our visual design’ that was subsequently removed from digital menus after a customer complaint.” 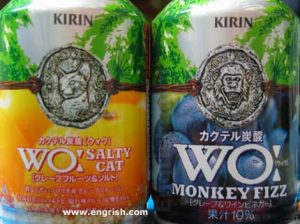 Hot? Thirsty? Who wouldn’t want to cool off with a nice cold can of Salty Cat?

Wait, that doesn’t sound appealing? How about some Monkey Fizz?

No? You must not be from Japan, then, where these two beverages were made. Wondering how they would taste if someone dared you drink them? According to one brave soul,

“Monkey Fizz is grape soda. With a little bit of vinegar. No, don’t ask, I don’t get it either.”

Korea is apparently suffering from an epidemic of bad Chinese translation. In fact, Korean Ministry of Culture, Sports and Tourism published a study showing that 60 of 185 restaurants in Seoul with Chinese-translated menus were riddled with errors.

According to the Korean Times, in one case, the Korean food “pork with aged kimchi (mugeun-ji-jjim)” was translated as “roast grandmother” in a restaurant near Ewha University and Hongik University.”

Roast grandma? Sounds a little too tough and stringy to me, but slow cooking can work wonders…

According to Korean lawmaker Saenuri Party Rep. Yeom Dong-yeol, efforts are being made to improve the situation, but restaurant owners have been resistant:

Yeom said although the National Institute of Korean Language, the Korea Tourism Organization and the Korean Food Foundation provided guidelines for foreign names of Korean food, restaurant owners seldom use them.

“To increase the cultural value of Korean foods, there should be more efforts to provide correct foreign names of the foods,” Yeom said. 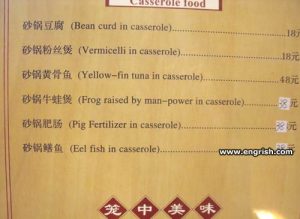 Mmmm, pig fertilizer casserole…just like Mom used to make! Served with a PooPoo smoothie and a side of crispy crap, naturally.

This menu was found in China.

Which of these delicious concoctions would you be willing to buy? What’s that, you’ve lost your appetite?

Well, now you can see how off-putting bad translation can make your product. Do your customers, your business and your brand a favor. Try our professional, reliable food translation service. We can help!