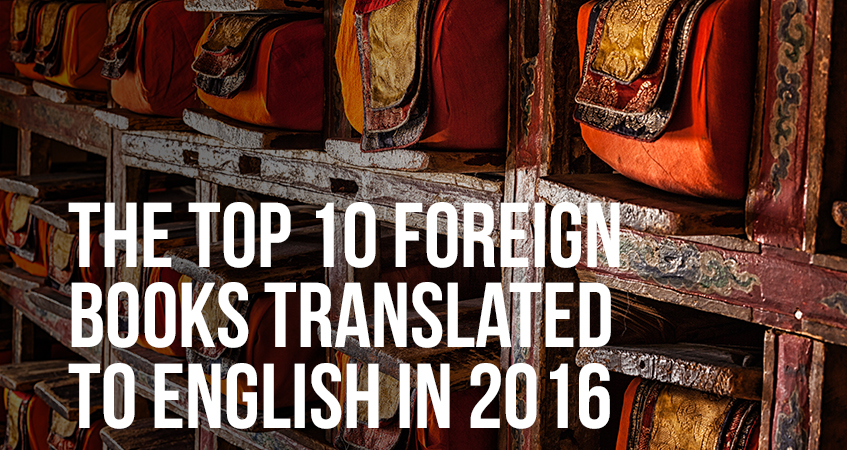 Translated by Christina MacSweeney, this is the first of Daniel Saldaña París’ novels to be published in English.
Among Strange Victims takes readers to Mexico on an absurdly surreal journey into the life of a 20-something good-for-nothing named Rodrigo. It has 4 out of 5 stars on Amazon, and NPR calls it “a classic slacker novel, a shaggy-dog story about breaking free from the tedium of daily life and finding some sort of aim if not meaning.”

This novel from German author Eugen Ruge takes readers from Berlin to southern Spain. The narrator, a 40-something writer, has decided to throw caution to the wind and leave his lackluster life behind. But Spain isn’t what he imagines it to be.

According to Kirkus Reviews, “this slight, philosophical book will humor anyone who’s ever questioned his or her place in this unforgiving universe.”

The Clouds by Juan José Saer

Translated by Hilary Vaughn Dobel,   The Clouds tells the story of a doctor taking 5 mental patients on a journey across Argentina to an asylum. Predictably enough, shenanigans ensue.

The one person to have reviewed the book on Amazon so far didn’t like it, but it has 4 out of 5 stars on Goodreads. If you like your novels light and fast-paced, this may not be the best choice.  If you like vivid descriptions and don’t mind a bit of exposition, give The Clouds a go.

A Cup of Rage, by Raduan Nassar

Raduan Nassar was one of Brazil’s most famous authors in the 1970s. Now, his first novel, Um Copo de Cólera, is finally available in English as A Cup of Rage. It’s a short read about a lover’s quarrel. The novel is still considered a classic of Brazilian literature, but there is some sexual and violent content to be aware of before you dive in.

The Guardian called A Cup of Rage “a burning coal of a book” and said ” it packs more power into its scant 47 pages than most books do into five or 10 times as many . . . The writing is chewy – dense, tough, but well worth the effort.”

Memoirs of a Polar Bear by Yoko Tawada

Memoirs of a Polar Bear is a whimsical novel narrated by 3 generations of performing polar bears. The English translation, produced by Susan Bernofsky,  has 3.8 out of 5 stars on Goodreads.

This witty novel from Chilean author Alejandro Zambra is told in the format of a multiple-choice test. The New York Times calls it ” work of parody, but also of poetry,” and also praises the quality of Megan McDowell’s translation.

It has 4 stars on both Amazon and Goodreads.

The Queue by Basma Abdel Aziz

Looking for some dystopian fiction to take your mind off of current events? Look no further . . . Basma Abdel Aziz’s novel is about life in an authoritarian society, where even getting help for a bullet wound requires that you wait in line for permission. And the line never moves.

The Queue won the English PEN Translation Award and has 4.5 stars on Amazon.

Liked Infinite Jest? You might also like the (much shorter) Sudden Death, which moves back and forth between various artists and historical figures in a meandering zigzag of a plot. According to Goodreads,

This Icelandic classic dates back to 1952. The author, Halldor Laxness, won the Nobel Prize in 1955.

Do you like reading about Norse mythology? What about the Vikings? Then check out this new English translation by  Phillip Roughton.

Wayward Heroes is a parody of the Icelandic sagas, skewering their glorification of war and violence. It’s also quite funny and well worth a read, earning 3.6 out of 5 stars on Goodreads.

Zama is a considered an “existential masterpiece” of Argentinian literature. It was first published in 1956. But only Spanish speakers could read it . . . until now.

The new English translation by Esther Allen has 4 out of 5 stars on Amazon. The BBC calls it a “Kafkaesque” and “surprisingly modern existential portrait of a tortured soul.”

Have you read any of these books? Let us know what you think of them in the comments!