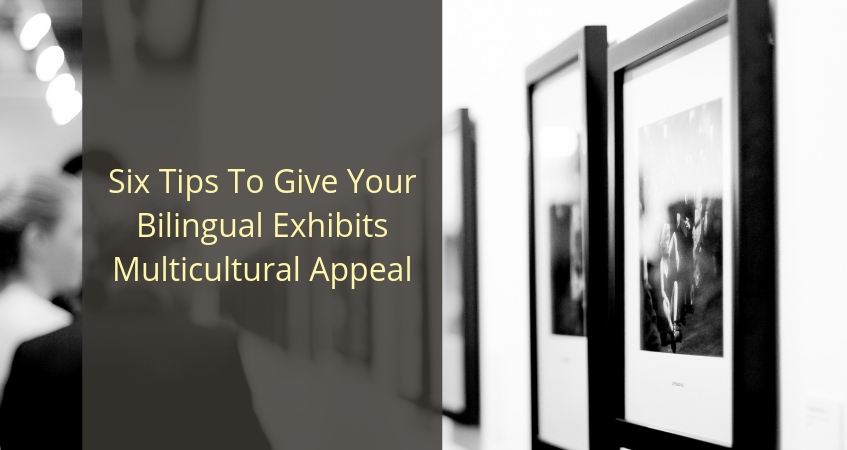 How can museums make their exhibits more accessible to visitors and to the surrounding community? Often, language is the key.

Around 55% of museums and science centres around the world already offer information for visitors in more than one language. Bilingual or multilingual exhibitions help museums better serve their home communities and attract international visitors, as well. Urban centres are becoming more linguistically and culturally diverse, and the number of international travellers is also on the rise. As a result, the need for multilingual exhibits will continue to grow.

Build a glossary to keep the terminology consistent.

For the sake of continuity, it’s essential to use the same terms throughout the exhibit, in both languages. A bilingual glossary of terms keeps your translators on the same page, and the vocabulary consistent.

According to the Canadian Museum of History, it’s often more efficient to create this glossary while you write the original draft of the text.

Aim for a recreation of the original text, rather than a direct translation.

It’s more important that the translated text convey the same meaning in the same tone than it is for it to be a word-for-word translation. Since languages can vary in structure and custom, rewriting is often necessary. The Canadian Museum of History explains:

“For example, in our English-language texts, we rarely start sentences with subordinate clauses because it is too indirect an approach in an exhibition context. In French, however, subordinate clauses are considered more elegant. They are more readily accepted, as without them, text can feel brusque.”

One possible exception to this general rule: translating the title an artist has given to their work. Here, you have a choice to make: translate the artist’s words as directly as possible, or use an interpretation that might better convey the meaning.

Give both languages equal time and attention.

In a bilingual exhibit, translation should never be an afterthought. As Carlos Plaza of the Miami Science Museum notes, a shoddy translation job is unlikely to impress.

“While some visitors will praise your institution for making the effort to provide the text in a second language, less forgiving ones might surmise that you didn’t care enough to do it right.”

Attention to detail and quality control is vital for the entire exhibit. Text in both languages should be easy to read and free of errors.

Get text edited and finalised in both languages before completing the visuals for the exhibit.

Depending on the source language and the target language, text can expand or contract during the translation process. Last-minute translations often mean last-minute redesigns for signs and other visual aids. That adds additional time and expense to the project.

Use graphic design that works for both languages.

Speaking of visuals, graphic design is also essential for multilingual exhibits. Both languages should be easy to find, easy to read and have equal visual weight. That sounds simple enough, but depending on the language pairs involved, it can actually be quite challenging.

When it comes to designing for multiple languages, text expansion and contraction is only one factor to consider.  For example, languages that use non-Roman scripts, like Chinese or Thai, often use less horizontal space but more vertical space. Meanwhile, languages like Arabic and Hebrew are read right-to-left instead of left-to-right.

Given these factors, it’s helpful to keep the text in both languages as concise as possible.  For example, the Canadian Museum of History keeps introduction text to 50 words in each language, allowing 75 words per language for in-depth descriptions. It’s also essential to keep the different languages clearly separated and easily distinguishable from each other.

While technology can’t replace the need for bilingual exhibits to serve diverse audiences, it can be a cost-effective way to augment your translation efforts. For example, the exhibit below, from the Amsterdam museum, uses QR codes to offer translation into ten different languages:

As the Guggenheim Museum explains, if your museum goes this route, some foresight is required to make sure visitors aren’t inadvertently excluded:

“Of course, the trick with BYOD solutions is that the museum should offer access to devices for those who do not have mobile devices, and free Wi-Fi and charging stations for those who do.”

Choosing the right language services provider can help. Yes, hiring an LSP is an investment.  However, the result is a faster, smoother translation process and a final product that’s free from errors. There’s no need to overtax your staff. And there’s no need to struggle over how best to translate the text. Our skilled linguists and other experts will partner with your team to make sure your exhibition is a success in any language.

Does that sound good to you? Then we need to talk. Contact us today to discuss how we can help with your next multilingual exhibition.