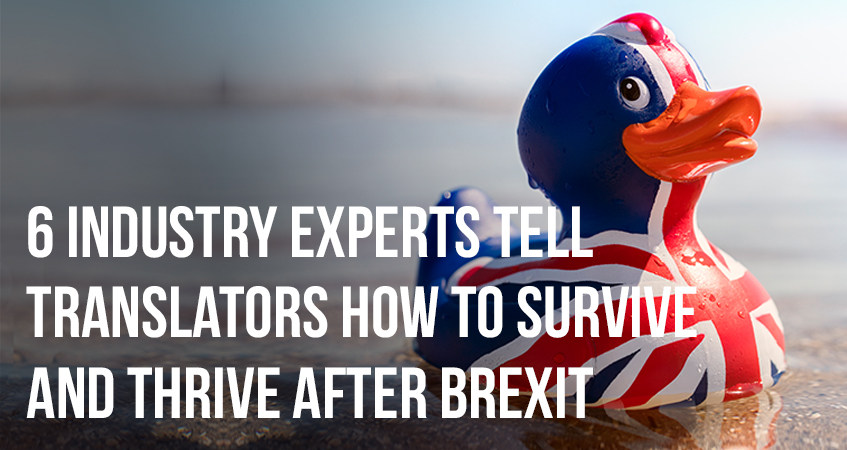 Did you expect the UK to vote to leave the EU? The Brexit vote rocked the world in June, and the shockwaves will undoubtedly be felt for years to come.

People in all sorts of industries are now trying to make sense of an uncertain future. The translation industry is no exception. In fact, translators and others in the language services industry have reasons to be wary, as so many translation opportunities depend on international business.

It’s always best to be prepared, but how do you prepare when the future is so uncertain? To help, we gathered six experts in translation and international business to discuss how Brexit is likely to impact the industry and what we can do to stay ahead of the game. Here’s what they had to say.

Our fearless leader Richard Brooks is the CEO of K International. He sees uncertainty and some potential problems ahead, but also opportunities.

If (and I think this is a big if as leaving the EU is an issue for the lawmakers) we issue article 50 and leave the EU I see there being several short term effects impacting on the UK translation market.

If we have a recession it will probably spread to Europe. Most people now have experience running a company in recession, this wasn’t the case in 2008 so at least we have recent case studies to refer to. As in 2008 only the strongest businesses will survive, you need to be agile, you need to have a strong balance sheet, you need to selectively invest, you need excellent business metrics and you need to have a genuine competitive advantage.

If the dream becomes true and the UK becomes a powerhouse trading with the rest of the world then the opportunity for translation will grow exponentially. Other industry professionals would do well to educate themselves in the cultures and economic trends outside of the EU. Some larger items I’d ask them to consider are the impact of the TTiP agreement, China’s foreign policies and what developing economies require. The EU will still exist (albeit in a different form). Companies will still want to trade inside it. Our industry will still help business to engage consumers in different cultures.

The future was always uncertain but with the Brexit vote, it become a little more so.

English Will Keep Its Status, But the UK Economy May Not

Balázs Kis is chairman of the board at Kilgray. He sees potential trouble for businesses operating in the UK, but strong future ahead for the English language regardless.

How do you think Brexit will effect the translation industry?

Voters made a blunt decision, but there is neither a fixed deadline nor a set of specific policies that would define Brexit.  I do not fear a loss of work for translators from or into English.  Nor am I afraid that English would lose its official status in the EU. However, if the uncertainty about Brexit’s specifics is prolonged, businesses may leave Britain in increasing numbers, and that will have a negative impact on the translation businesses who operate in Britain.

Cross-border Trade is Increasing for Now

Andy Mulcahy is the editor of eCommerce Worldwide, industry experts in cross-border trade.

He believes it’s too soon to tell what the long-term effects will be, but at the moment there may be opportunties related to increasing cross-border trade.

How do you think Brexit will effect international businesses?

So at the moment, the online retail indicators have not revealed much in the way of negative impact, although it’s still too soon after the referendum result to draw any serious conclusions.

Seek Out Other Markets as the Pound Falls

Gillian Searl  is the founder and CEO of Linguagloss,  a UK translation firm offering a range of 21st century translation/localisation solutions to global businesses and the language service industry.

She sees Brexit’s impact on the exchange rate as the chief issue facing the translation industry in the short term.

How do you think Brexit will effect the translation industry?

LSPs will have to increase rates for UK-based companies, thus contributing to the generally expected rise in prices in the UK economy – and the outlook of – at best – economic troubles and – at worst – a recession. UK businesses faced with lower domestic demand will be well-advised to look for opportunities in other countries and priced in currencies other than sterling. This actually represents an opportunity for LSPs to actively target companies already dipping their toes into international markets – or planning to for the first time. The UK government is supporting these efforts via the UKTI.

In the meantime, LSPs should also be looking to attract EUR/USD paying customers from around the world, especially for language combinations into English, since GBP rates are now more competitive than before. Again that assumes that the work can be completed by suppliers happy to work in GBP – which is a big assumption to make due to the falls in language learning and the low supply of translators who have the necessary skills and experience. So UK-based LSPs may consider setting up companies elsewhere – in the Eurozone or beyond.

An Opportunity for Motivated Businesses to Rise Above the Storm

Andrew Hickson is the account manager for the UK market for Dutch LSP Euro-Com International. Born and raised in Co. Kerry, Ireland, Andrew is delighted to see British people finally succumb and apply en masse for Irish passports. It was bound to happen eventually…

Andrew believes Brexit has the potential to shake up the translation industry, giving the best businesses in the industry a chance to show what they’re worth as they rise above the chaos.

In the long term I think Brexit will have a largely positive effect. The vote to leave the EU came as a shock to everyone. This shock needs to be used by companies in the translation industry to inspire root and branch review of what roles they are to play in a re-shaped Europe. Every company should be actively assessing the risks and opportunities which are going to present in the coming years. Only the most flexible, creative and determined will be able to navigate the stormy conditions, which will need to be overcome, before inevitable advantages become clear.

Get Out of Your Bubble

My understanding of Brexit, and the tumultuous campaign which led up to the vote, was coloured heavily by the people in my social sphere. I love comedians like John Oliver and John Finnemore. From a personal point of view, I have been made painfully aware that the media and social bubble I live in needs to be expanded. Try understanding something from someone else’s point of view.

There are large swathes of people across the UK, the US and indeed the whole world who DO feel more frightened; who DO feel more at risk; who DO feel forgotten and betrayed by the people who are supposed to represent their best interest. I don’t have a cure or a possible solution, but I would suggest being open to reading an article or two from a source you know you traditionally don’t agree with. It can’t hurt.

Sarah Pokorna is working as Business Development Manager for Memsource.  She has been in the industry for well over 5 years, working as a freelance Czech,Slovak/English translator and in LSP sales and marketing.

I think the most important thing at the moment is for translators and industry professionals not to panic, jump to conclusions, or speculate about anything. It’s going to be a good couple of years before everything is finalized, and by being such a shock result nothing has been properly planned yet. Hopefully, if Brexit is done right, it might even have some positive impacts.

As you can see, nothing is set in stone, and there are both risks and potential opportunities ahead. We hope the perspectives in this post have helped shed some light on the subject!

Previous Post Your End-of-Summer Language News Digest
Next Post How Much Do You Know About World Languages?