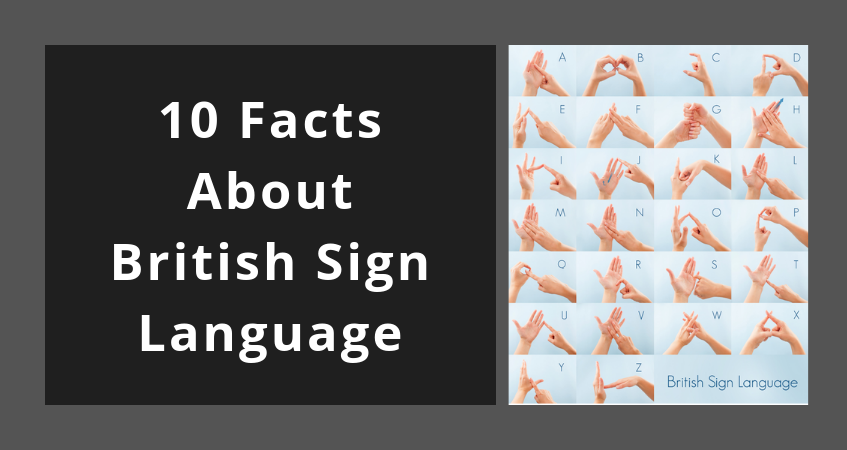 70,000-87,000 of these people are Deaf and use BSL as their first language. For children who are born deaf, English is often a second or third language.

The first historical mention of BSL is a record of a wedding ceremony conducted partially in sign language in Leicester, 1576.

The groom, Thomas Tillsye, was deaf, and so, according to the Parish Book,

“the sayde Thomas, for the expression of his minde instead of words, of his own accorde used these signs…

First he embraced her with his armes, and took her by the hande, putt a ring upon her finger and layde his hande upon her harte, and held his hands towards heaven; and to show his continuance to dwell with her to his lyves ende he did it by closing of his eyes with his hands and digging out of the earthe with his foote, and pulling as though he would ring a bell with divers other signs approved.”

Thomas Braidwood established the first public school for the Deaf in Edinburgh in 1760.

The school relied on a form of sign language and fingerspelling, though Deaf students were also taught to lip-read and speak. Notable pupils included the astronomer John Goodricke; Francis Mackenzie, governor of Barbados, and the painter Thomas Arrowsmith.

The British government didn’t officially recognize British Sign Language as a language until 2003.

However, it’s one of the official languages in Scotland. Late last year, the Scottish government also announced an ambitious plan to “integrate the use of BSL into everyday life,” making it easier for Deaf citizens to access services and education.

English is the primary language in both the United States and the United Kingdom, so you might expect that their sign languages would be similar as well.  You would be wrong. ASL and BSL are mutually unintelligible, with only 31% of signs in common.

That’s because the development of ASL was heavily influenced by Protestant minister and educator Thomas Hopkins Gallaudet. When Gallaudet traveled overseas to learn how deaf people were taught in Europe, the Braidwood schools refused to show him.  The French Royal Institution of the Deaf was more forthcoming than the British institutions. As a result, ASL is much more closely related to French Sign Language.

From the late 1800s to the 1940s, British Sign Language was not formally taught to Deaf students.

During this period, schools focused exclusively on teaching students to speak and lipread. BSL survived in secret,  passed on from one deaf person to another, until the 1940s.

Most BSL interpreters go through at least seven years of study to become fully qualified.

Whether it’s a sensitive medical situation or a public safety concern, using only certified interpreters ensures that Deaf people get the information they need in a format they can understand. Using accredited interpreters (instead of, say, a staff member who “knows some signs”) also avoids mix-ups like this one from Florida, when an ad-hoc interpreter attempted to translate evacuation instructions for an oncoming hurricane and ended up warning Deaf residents about a non-existent “bear monster” instead.

If you’re having trouble finding a qualified BSL interpreter, we can help. All of our interpreters are approved by the Council for the Advancement of Communication with Deaf People. We can also assist you with recorded sign language content to make your videos accessible. Learn more about our sign language services here.

There are 908 registered BSL interpreters in the UK.

This applies to all sorts of services. However, it’s especially pressing during medical appointments, when it’s essential that physicians and patients be able to communicate with each other. The Equality Act of 2010 requires service providers to provide reasonable accommodations to those with disabilities. And yet,  according to a 2012 survey, 2 out of 3 deaf people have been unable to access BSL interpreters when requested during hospital appointments.

As Paul Redfern, business development manager at the British Deaf Association, told the Guardian in 2014,

“Lack of proper access provision leads to misdiagnosis, delays in appointments and wrongly prescribed medication, and all of this is an extra burden on the NHS in terms of real costs so it would make a lot more sense if we had good access provision.”

Not to mention, I would be absolutely terrified if I were having a medical emergency and couldn’t understand what was going on around me. Wouldn’t you? That’s the reality that many Deaf people live with every time they seek medical attention. Hopefully, the situation will improve as awareness grows and technology advances.

Tags: British Sign Language BSL Deaf
Previous Post 5 Powerful Lessons from The Silent Child About Deaf Communication in a Hearing World
Next Post The Top Languages in Africa: A Guide to the Most Spoken African Languages