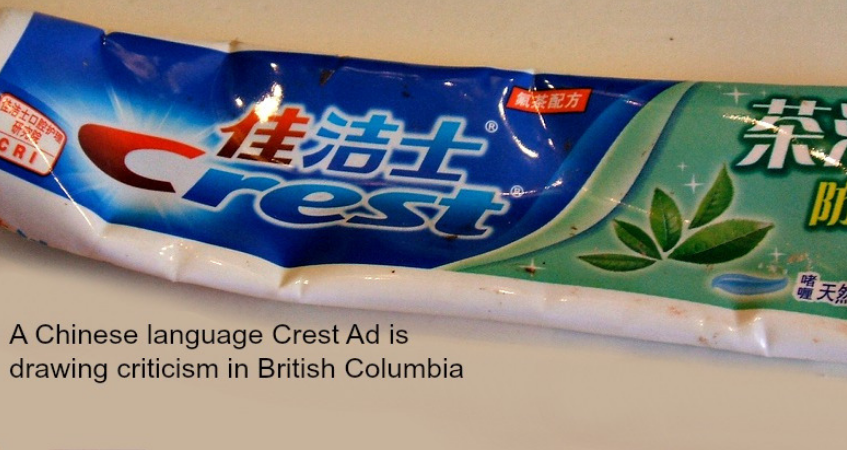 Sometimes, even the most seemingly innocent translations can end up causing controversy.

The ad features a Chinese bride posed on a mouthwash-blue background next to a selection of Crest “3-D White” products. The accompanying text is all in Chinese, and translates to “In a nutshell, it’s a good thing this bride used Crest because now her teeth are shiny white.”

Why use a Chinese translation for a billboard in Canada? The area where the ad is located is heavily populated by Chinese immigrants. According to CTVNews, almost half of Richmond’s population speaks Chinese (Cantonese, to be precise.)

With such a large Chinese-speaking population, it just makes sense to target them with advertising. However, the campaign has left some English-speaking residents feeling left out.  For instance, one local resident told the Richmond Review that she would be boycotting Proctor and Gamble products, and some have pushed for legislation requiring all signs to be in one of Canada’s official languages.

One woman asked CTVNews, “How can I understand what they’re talking about or what they’re marketing?”  though it seems like this particular ad is fairly self-explanatory whether you can read Chinese or not.

“I think it reflects a certain level of insensitive on the part of the company or the advertising agency. That’s very unfortunate. I don’t think this is the right thing, but on the other hand I think this is understandable in terms of a marketing strategy…In a free society like Canada, where we treasure freedom of expression, I think it’s very difficult to use any legislation to forbid this kind of targeted marketing. Actually, if we do that, it may even create more problems.”

In a statement to  CTVNews, a Crest Canada spokeswoman said

“We deeply value the rich diversity of Canadians and continuously strive to connect with all consumers in relevant ways. “While the vast majority of our advertising remains in one or both of Canada’s official languages, this unique ad was created to reach a new audience of diverse consumers.”

What do you think? Should advertisements target local language minorities without including those who speak the country’s official language?
Photo credit: