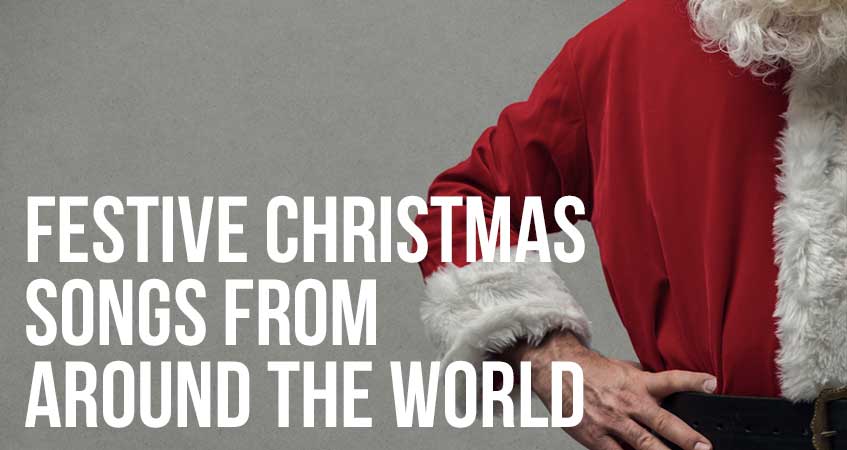 Are you excited yet? Frantic? Both? Soothe your stress and get in the Christmas spirit with this collection of the top Christmas songs from around the world:

This French Christmas classic was originally recorded by Tino Rossi in 1946. It’s currently the best-selling French single ever, and it’s been covered numerous times by other artists. Here’s the original version.

Looking for something a little heavier and more irreverent? Check out Trust’s cover, here.

Alternately, if the news lately has you ready to forget the holidays altogether and curl up in a ball to wallow in despair . ..  well, here’s a punk version of Petit Papa Noel that might appeal to you.

El Gran Combo de Puerto Rico is a Salsa music orchestra that’s been called the “most popular Salsa music group that has ever existed.” The group has been since 1962, but the lineup changes frequently as new up-and-coming salsa musicians join and others strike out on their own.

“La Fiesta de Pilito”  is all about putting your problems aside for the holidays and enjoying the festivities . . . and the rum.

This an old traditional Catalan Christmas carol dates backs to the 16th or 17th century. Nobody is quite sure what “Fum, fum, fum” means. Does it refer to smoke rising from winter chimneys? “Fum” means “smoke” in Catalan? Or is it meant to imitate the sound of a drum, or a guitar, or possibly a rocking cradle? What do you think?

This is a traditional Swedish singing game performed around the Christmas tree (and also the midsummer pole). The title means “The Fox Runs Over the Ice.”

This is a fun, upbeat, traditional carol from the Philippines.  The title translates to “Christmas Has Arrived,” and the lyrics remind us to keep the Christmas spirit going even after the holidays:

Let us love one another,
May we follow the Golden Rule,
And from now on-
Though it not be Christmas, let us keep giving.

You’ve probably heard this one before . . . but maybe not in the original German. Here’s a version by the German band MoonSun.

This heartbreakingly beautiful carol translates to “A Crickets’ Christmas” and is about a mother singing to her child to distract him from being hungry on Christmas.

You’ve also heard this one before . . . it’s the original French version of “Angels We Have Heard on High.” It was translated into English in 1862, and has since been performed in many different languages around the world.

And now for something completely different…

For the cheesiest holiday-themed pop songs ever, it’s surprisingly hard to beat South Korea. For example, take this collaboration between K-Pop bands Orange Caramel and Nu’est.  Does it get any cheesier than a pack of flawless young Korean pop stars cavorting with giant stuffed animals. No. No, it does not.

This popular, traditional Polish carol is about shepherds traveling to Bethlehem. This video, on the other hand, is a montage of Christmas-themed weirdness. That orchestra of creepy elves is probably going to haunt my dreams tonight . . . and now it will haunt yours, too. Merry Christmas!

This dates back to 1974, and it’s everything you’d expect from an Indian Christmas carol from the 70s.

Trust me, you need this in your life right now.