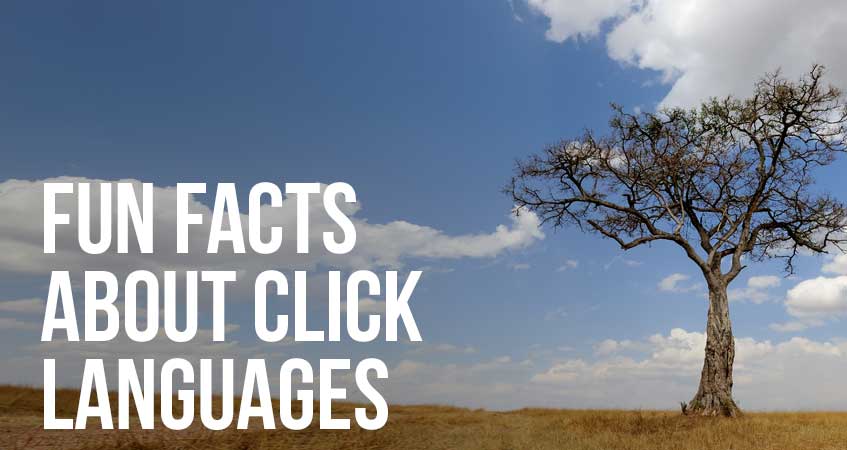 What’s up with click languages? Did you know that “click consonants” are found only in certain African languages? Do you want to learn more about them? Here are 7 interesting facts about these intriguing languages:

“Clicks” Are Found in Only 24-38 Living Languages

Clicks have nonverbal meanings (like indicating disapproval or sympathy) in English and many other languages. But they’re only used as consonants in 24 to 38 living languages. Why the uncertainty? Sometimes, it’s hard to differentiate between a language and a dialect. Regardless, all of these languages are spoken in Africa. There is also an extinct Aboriginal language from Australia that uses them, but it was never used for day-to-day communication.

The largest language family with clicks is the Khoisan “family.” The scare quotes are because linguists no longer believe that all of the languages in this family are actually closely related. Click consonants seem to be the only thing that ties them together.

Click consonants are the defining feature of the Khoisan languages, but neighbouring languages like Zulu and Xhosa also incorporate them. Linguists believe clicks spread to these languages through intermarriage and interaction with the neighbouring San peoples.

One interesting theory about how this may have happened is described here:

In the Zulu and Xhosa cultures (less so in some areas now), certain people are not supposed to say the names of certain other people, or even say things that sound like their names. . . . what sound could you use that wouldn’t make it a different word that might mean something else, and would still make it understandable? The Khoisan wives knew just what to use: clicks.

As Khoisan wives used their native clicks to censor themselves, eventually the clicks became associated with polite/formal speech. From there, they spread to become an integral part of the language.

The Taa or !Xoõ Language Has the Most Consonants of Any Language

The Taa or !Xoõ language has 164 consonants, including more than 100 click sounds! For comparison, English has 24 consonant sounds. French has 22, and Welsh has 31.

To hear what a conversation in !Xoõ sounds like, watch the video below:

“Click languages” may be the oldest languages in the world.

Did the first spoken human language include clicks? Some scientists think so.

Language everywhere is constantly changing, even today.  If you don’t believe me, go find a teenager and strike up a conversation.  So, how can we know what the first-ever human language sounded like? We can’t. . . but we can make an educated guess.

In 2003, Stanford geneticists analyzed mitochondrial DNA from two groups of click speakers: the Ju|’hoansi of the Kalahari desert and the Hadzabe of Tanzania.  Both groups are among the most ancient cultures, with mitochondrial DNA that links them to the dawn of humanity. Despite this, they aren’t closely related. In fact, the Stanford scientists described them as “on the opposite sides of the root.” They’ve had almost no contact with each other almost since humans became humans.

But both languages have clicks. As the New York Times explained,

Unless each group independently invented click languages at some later time, that finding implies that click languages were spoken by the very ancient population from which the Hadzabe and the Ju|’hoansi descended. ”The divergence of those genetic lineages is among the oldest on earth,” Dr. Knight said. ”So one could certainly make the inference that clicks were present in the mother tongue.”

How do you write clicks?

It depends on the language and the type of click in question. In general, Xhosa and other Bantu languages use the Roman letters c, q, and x, either by themselves or in digraphs. Khoisan languages use exclamation points and other symbols based on a vertical bar called a “pipe” to indicate clicks.

So, the “!” in the word !Kung indicates a click, as does the vertical bar in “Ju|’hoansi”.

The “click language” in “The Gods Must Be Crazy” is !Kung.

If you’ve ever watched “The Gods Must Be Crazy” and wondered about the mystery language the tribe in the movie speaks, wonder no longer. It’s the Juǀʼhoan dialect of !Kung. The !Kung actor, Nǃxau ǂToma, lived a traditional life before starring in the film. Initially, Nǃxau received less than $2,000 compensation for his role.

After the film grossed over $100 million,  the filmmakers eventually gave him an additional $20,000 and a monthly stipend.

Click languages may sound exotic to Western ears. But to native speakers, they are no more unusual than “A is for apple” or “B is for boy.” As South African singer and activist, Miriam Makeba says in the recording below,

“Everywhere we go, people often ask me, ‘How do you make that noise. It used to offend me because it isn’t a noise. It’s my language.”

We’ll leave you with a link to this video of Makeba singing “The Click Song,”  or, more properly, “Qongqothwane.” You’ll have to turn the volume all the way up, but it’s worth it to hear her break down Xhosa pronunciations.

Tags: africa click Language
Previous Post 7 Reasons Your International Marketing is Doomed to Fail
Next Post Slang Through the Ages: Can You Guess What These Slang Words Mean?