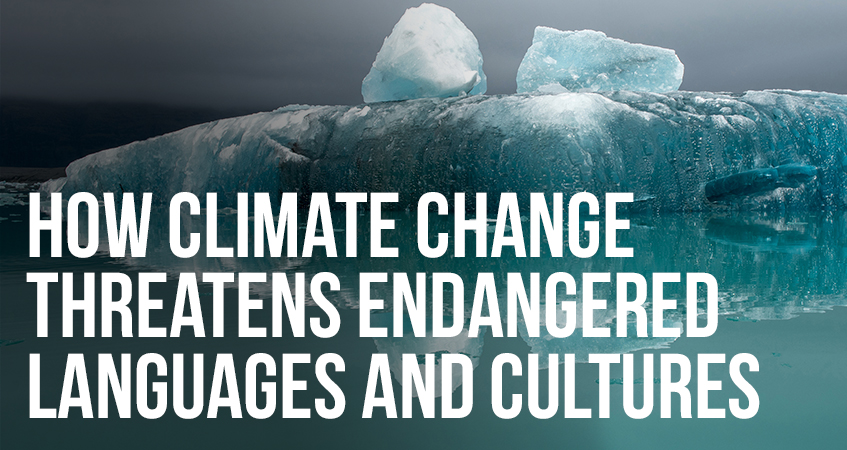 The world is changing. First of all, it’s growing hotter. Ice is melting, seas are rising. And it’s not only animals and plants that are in danger. Human lives and homes are also at stake. Cultures and languages that stretch back thousands of years may soon vanish forever, along with the lands and ecosystems that once sustained them.

How is climate change accelerating language loss? Which endangered languages and cultures are most at risk? And what, if anything, can be done?

What does climate change have to do with language loss? Plenty, as it turns out.

First of all, climate change is disrupting traditional ways of life for indigenous people around the world.

For example, consider the Inuit of Greenland. The Greenlandic language contains many words that relate to specific weather patterns. What happens when those familiar patterns change?

As Katie Yoder writes in Grist,  in Greenlandic

A single word, isersarneq, communicates something like: “This is a wind in the fjord that comes in from the sea, and it can be hard to get home, but once you get out of the fjord, it’s nice weather.”

But recently, as the winds change and become unpredictable, these terms are disappearing.

Also, it’s not just Greenland. Even in the coldest parts of Siberia, climate change is disrupting traditional ways of life. For example, the Viliui Sakha, an indigenous group of horse and cattle breeders, tell a story about “the bull of winter.” The bull keeps the cold in winter until it’s time for spring. According to anthropologist Susan Crate, the warmer winters have caused elders to question whether or not the bull will return next year:

As traditional ways of life vanish, languages often vanish with them.

Scientists expect climate change to render some areas completely uninhabitable. Low-lying islands are particularly at risk. What happens to the people who live in these areas now? They will become “environmental migrants,” forced to leave their homes behind. It’s quite possible that will also mean leaving their language behind, as well.

Climate change is only one of several factors driving species around the world to extinction. But it’s likely to become more of a factor as the world gets warmer.

What does that have to do with endangered languages? There is a demonstrable connection between biodiversity and language diversity.  For example, New Guinea is not only the country with the most languages on Earth. It’s also one of the most biodiverse countries in the world.

Nobody is quite sure why that is. But researcher Jonathon Loh shared some theories in a 2014 article in The Guardian:

“Places of high diversity, especially tropical forests, have always been known to have high linguistic diversity, whereas tundra and deserts have low diversity,” says Loh. “It is possible in some way that higher biodiversity is capable of supporting greater cultural diversity. The explanation seems to be that both biological and cultural diversity depend on the same environmental factors such as temperature and rainfall.”

In fact, at least half of New Guinea’s languages are threatened with extinction.

The cultures (and languages) most at risk for climate change are located mostly in the Arctic, where traditional ways of life depend on cold winters, and in low-lying coastal areas menaced by rising sea levels.

Did you know that tiny Vanuatu is one of the most linguistically diverse countries in the world? Collectively, the inhabitants speak over a hundred different indigenous languages.  English, French and the national language Bislama are also spoken on the islands.  But their homes are under threat from a combination of rising sea levels, more intense tropical storms and shifting tectonic plates.

The Marshallese language unites this South Pacific Island nation. But people are leaving the island in record number as rising sea levels flood villages and contaminate drinking water. Currently, Marshallese has a healthy 55,000 speakers. But what happens if everybody moves away? Most Marshallese migrants end up in the US. Their descendants will probably speak English. As anthropologist Peter Rudiak-Gould notes in Grist:

“There’s definitely the sense that if you don’t speak Marshallese, you’re not really a Marshallese person. The culture couldn’t really survive without language.”

These islands are only about 4.6 metres above sea level at their highest point. Obviously, rising sea levels are a concern. In fact, when New Zealand celebrated Tuvalu language week this year, they focused on climate change and rising sea levels.

New Guinea boasts over 850 languages, the most in a single country. However, more than half of those languages are threatened. Rising sea levels caused by climate change are already on the verge of wiping out the tiny island community of Takuu Atoll … along with its unique language and culture.

Also threatened by rising sea levels, the president of tiny Kiribati predicts the island will become uninhabitable within the next 60 years.

Greenlandic has approximately 60,000 native speakers. It is the only official language of Greenland. That said, UNESCO still lists it as “Vulnerable.” Greenlanders traditional culture is threatened not just by warming temperatures and melting ice. As the ice melts, natural resources like oil and gas suddenly become accessible. Because of this, Greenland has attracted the attention of major oil and gas companies.

Russia’s Sakha Republic is the home of the  Viliui Sakha. Warm, wet winters have disrupted their traditional lifestyle. Widespread floods make it difficult to farm in the spring. Meanwhile, the changing climate drives familiar wildlife away.

There are too many cultures and languages threatened at least in part by climate change to list here. In fact, this list only scratches the surface.

What Can We Do?

What can we do to protect cultures and languages threatened by climate change?

First, we have to recognize that it’s not just about climate change. There is a tendency to see indigenous cultures as “frozen in time,” but they are actually quite adaptable. How do we allow them to adapt without losing their uniqueness and giving up their language?

For most indigenous cultures, in the past “adapting” often meant “moving.” Unfortunately, they now survive on scraps of land. Moving of their own accord is often impossible.

As Greg Downey writes on the Neuroanthropology blog,

In sum, indigenous people are often not directly threatened by climate change alone; rather, they are pinched between climate change and majority cultures who want Indigenous peoples’ resources while also preventing them from adapting in familiar ways. The irony is that the dynamic driving climate change is attacking them from two sides: the forests that they need, the mountains where they keep their herds, and the soil under the lands where they live are being coveted for the very industrial processes that belch excess carbon into the atmosphere.

The best way to preserve native languages is to ensure that indigenous people have a voice in their own futures, and in where they move if their homelands become uninhabitable.  Recognizing the value in their languages is also important. Languages are vehicles for carrying knowledge, and indigenous languages often carry deep knowledge about the surrounding environment that can help scientists and conservationists better track environmental changes.

Hopefully, at least some of these languages can be preserved.