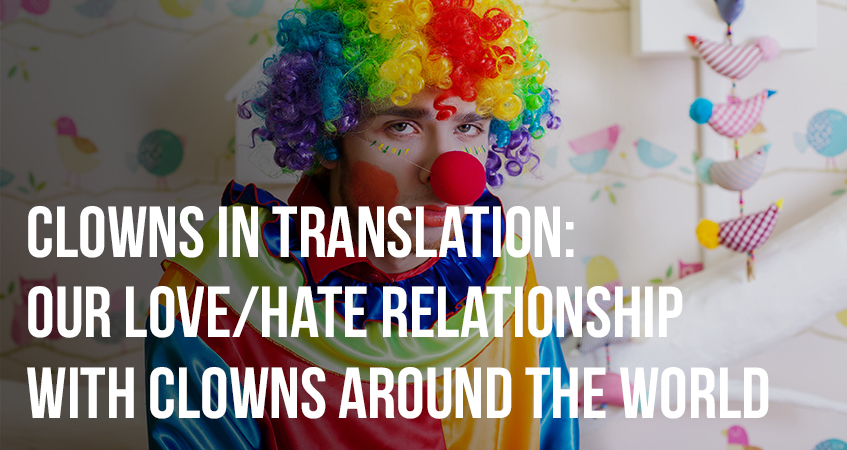 These days, we tend to associate clowns with either children’s entertainment or horror stories. Witness the “Great Clown Panic of 2016” currently sweeping the globe.  From small-town America to the UK to Australia and New Zealand, “creepy clowns” have been terrifying the populace.

This may seem like a modern-day problem, but actually, clowns have been with us always. Even the creepy ones. “Clown” figures exist in cultures and mythologies from around the world. And they’re often a little terrifying.

So, just in time for Halloween, let’s take a look at creepy clowns around the world.

A Brief History of Clowns Around the World

The first clowns we have a record of date back to Ancient Egypt, where dwarf clowns entertained the Pharoah as far back as 2500 BCE.  Meanwhile, in Ancient Greece, comedy plays featured performers in outlandishly designed and padded costumes wearing masks that exaggerated their facial features. Ancient Greek theater also featured “rustic buffoon” characters called sklêro-paiktês who are sometimes credited as the ancestors of modern

The ancient Roman theater also featured a “rustic buffoon” laborer type, called a fossor.  Another type of Ancient Roman clown was the stupidus, a constant victim of tragicomic misfortune, often self-inflicted. As you might have guessed, this is the origin of the English word “stupid.”

But in a twist that will come as absolutely no surprise to those of you with coulrophobia, there’s another inspiration for the modern-day clown: the comic demon of medieval passion plays. Over time, the trickster demon turned into the trickster harlequin of the Italian Commedia dell’arte.

Meanwhile, court jesters, with their multicolored outfits, entertained kings, nobles and townspeople alike starting from the medieval period on to through the 18th century.

Where Does the Word “Clown” Come From?

The origin of the English word “clown” is uncertain, but it is thought to derive from a Nordic word meaning “clumsy.”

Want to call someone a clown in another language? Many languages have two different words for clown: one borrowed from the English “clown” and one from the Italian “Pagliaccio.” Here’s how to say “clown” in 11 languages:

Clowns Around the World (Creepy and Otherwise)

Most cultures incorporate a “clown” character into their mythology.    Here are some examples from around the world:

Creepy Clowns of the Commedia dell’arte

Beginning in the 1500’s, a type of improvised theatre called the commedia dell’arte popular in Italy. It soon spread throughout France and England, and included notable clown-like characters:

Harlequin (or Arlecchino): A mischievious, acrobatic servant in colorful patchwork clothes. In early performances, he was portrayed as utterly stupid. Ove.r time, that changed and he became more of a trickster.

Pierrot: Harlequin’s counterpart, the original “sad clown.”  Usually, he competes with Harlequin for a love interest and loses. In some plays, however, he gets the girl but murders her in the end. This super creepy illustration shows Pierrot tickling his wife  to death.

The character of Pierrot was most famously portrayed by  Jean-Gaspard Deburau in 19th century Paris. Depending on the script, his interpretation of Pierrot was either noble and long-suffering or a “naive and clownish Satan.” In real life, Deburu once struck a child dead with his cane.

Clown:  A later addition from England, Clown is a clumsy, stupid foil for Harlequin and Pierrot.

Pagliacci is an Italian opera first performed in 1892 that revolves around an acting troupe. After discovering her cheating, the main actor kills his wife on stage during a performance, dressed in greasepaint and a clown costume.

Joey the Clown  was the alter-ego of British actor Joseph Grimaldi. He designed the colorful “clown” makeup we’re familiar with today. When the makeup came off, however, he lived a hard and miserable life and died an alcoholic.

Mr. Punch, of the Punch and Judy show, is a depraved marionette with a clownish appearance. Modern versions of the show have been sanitized for children. The older versions had Mr. Punch beating his baby, his wife, and various other characters to death, before finally claiming victory over the devil himself in the grand finale.

Clowns Around the World: Creepy Clowns in Native American Cultures

Mudheads: In Plains Indian traditions, mudhead “clowns” didn’t just make people laugh. They had an important ceremonial role and were also healers. However, they definitely had their creepy moments. Consider this ritual, described in Ravishly.com:

During these rites, the mud-heads engaged in delightful antics of snatching up children and running away with them.

As the tribe proceeded to ritually chase the kidnappers, the clowns would jettison some of the children—who represented the animals the hunters would miss in the coming year, divinely spared to maintain their herds. The unlucky imprisoned children represented the spirits of slain animals. But all ended happily: the children would be given gifts as an apology to them, and as a symbol of thanks to the slain animals.

The Booger Dance: The Booger Dance is a Cherokee tradition used to scare off evil spirits and mock invading outsiders. The Booger Men wear ritual masks that often appear disfigured, as though by smallpox. Though the dance is meant to be humorous, we think you’ll agree the masks (seen above) are a wee bit spooky!

Clowns Around the World: Asian and African Cultures

What about in Asian and African cultures? There are definitely “clown” figures, but they don’t have as much of a dark side. For example, in some African tribes, clowns are considered peacemakers.  They mediate disputes and use humor to move both parties toward a resolution.

In Ghana, troupes of clowns called Emasi, or “masks men,” move from village to village entertaining children from Christmas to New Years. Sometimes, they invite the children to travel with them, bringing them back a few days later.

In Indonesian shadow plays, the  punokawan are ugly, comedic servant characters. Although bumbling, they are wise and honest advisors. “Punokawan” roughly translates to “clear-sighted, clever companion.”

In China, chou characters fill the “clown” role in Peking Opera. They are good-hearted but ugly … in fact, the whole idea is that they are so ugly they scare away evil spirits!

As “clown panic” spreads across the globe, keep in mind that clowns (yes, even the creepy ones) are an important part of the human experience. That’s why they occur, time and time again, in cultures from around the world.

0 thoughts on “Clowns in Translation: Our Love/Hate Relationship With Clowns Around the World”