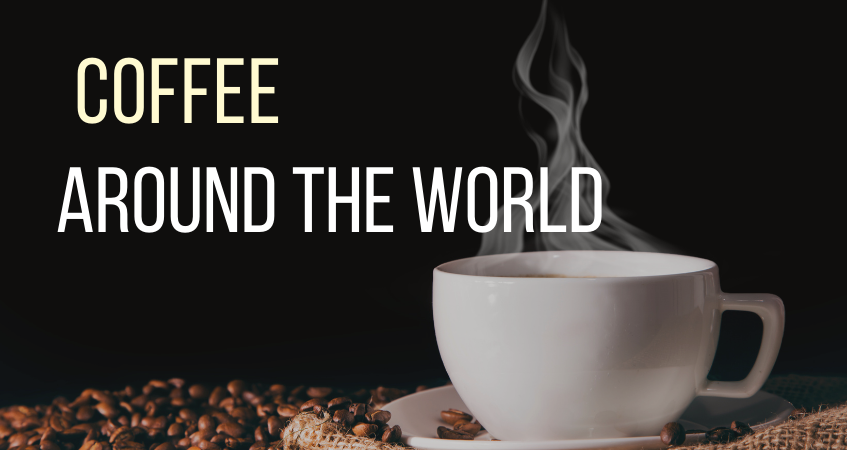 Coffee makes the world go round, right? It’s the second-most-popular hot beverage in the world, and everywhere you go there’s another way to drink it. Here’s the lowdown on how people drink coffee around the world.

Starbucks’ signature drink, the Frappuccino, was originally served by a Boston-area coffee chain called the Coffee Connection.  When Starbucks purchased the chain in 1994, this frozen coffee milkshake concoction quickly took over the United States (and the rest of the world, as Starbucks expands its global empire.)

If you’re in the New Orleans area, try a hot mug of coffee and chicory. This blend became popular during the Civil War, when the Union blockaded the Port of New Orleans. That meant no more coffee, and desperate residents began mixing what they had with ground, dried chicory root to stretch out the supply.  Now, it’s tradition (and a delicious one, at that.)

Coffee is kind of a big deal in Italy. In fact, with 100,000 coffee bars for 60 million people, Italy has the highest number of coffee bars per capita in the world. It is also the birthplace of espresso, so if you order un caffè there, an espresso is what you’ll get. Espresso is consumed at all hours here, but cappuccino, macchiato, and other espresso drinks with milk are only considered suitable at breakfast time.  Some regional variations you should be aware of:

Austria is famous for its cafes. Note that if you order a “cappuccino” in an Austrian Kaffeehaus, you’ll likely get served coffee with whipped cream instead of frothed milk. Order a melange or Weiner Melange for a closer equivalent of an Italian cappuccino. A Kaisermelange involves whisked egg yolk instead of milk or cream.

Did you know that the Finns drink the most coffee out of all us? It’s true- the average Finn drinks 12 kilos of coffee per year! And sometimes, especially in rural areas, they drink it with cheese.

Cheese in coffee? Yes! The cheese in question, called Leipäjuusto or juustoleipä, is traditionally made from the rich milk of a cow that has just had a calf. You can either dip it in the coffee or just place chunks of it on the bottom of your cup and pour the coffee on top.

Where does your coffee come from? In Indonesia, it might come from the back end of a palm civet. If you’ve got the money, that is. Called Kopi Luwak, this coffee comes from coffee beans that have been fed to and excreted by the Asian palm civet. Supposedly, the trip through the animal’s digestive system improves the flavour profile.

Kopi Luwak is not cheap- the going rate is around €550 per kilogram! Note that at some establishments, kopi luwak is produced by what is essentially factory farming. If you want to try kopi luwak, please make sure it’s ethically sourced!

In Thailand, coffee tends to be strong, sweet and cold. Iced Thai coffee is spiked with sweetened condensed milk, poured over ice and then topped with evaporated milk or cream for a rich, refreshing treat.

Can’t make it to Thailand? Here’s a recipe!

And if you thought kopi luwak was weird, check out “Black Ivory Coffee.”  This Thai coffee is produced by feeding coffee cherries to elephants and collecting the remains.  At about £701 per kilogram, this is the most expensive coffee in the world. At least it’s for a good cause. It’s produced by an elephant refuge and the proceeds go toward the animals.

Of course, they also have a website if you’d prefer to just donate.

If you’re visiting Vietnam, try a ca phe trung or egg coffee for me, would you? Served cold, this drink is made with egg yolks, sugar, condensed milk and sometimes cheese.  It is said to taste like Tiramisu or “like a Cadbury creme egg with a hint of mocha.”

Here’s a simple recipe for it from Legal Nomads.

Do you prefer coffee or tea? Why not both! YuanYang is Hong Kong milk tea spiked with coffee, sweetened and served either hot or over ice.

For those of you drinking along at home, here’s a recipe!

Café de olla is a traditional Mexican brew made in a clay pot, fragrant with cinnamon and brown sugar lumps called piloncillo.

Care to try it? Here’s a recipe.

In Ethiopia, coffee is an important part of traditional culture. In fact, there’s an Ethiopian saying, “Buna dabo naw,” that translates to “coffee is our bread.”

Lucky visitors might find themselves invited to a traditional coffee ceremony, in which the beans are roasted by hand, ground with a mortar and pestle,  and brewed in a special pot. Coffee is served with sugar or sometimes salt, and you’re expected to hang around for three cups to ensure a blessing.

Turkish coffee is boiled with the grounds, which settle to the bottom of the cup and can be used for fortune-telling.  You can order it with varying degrees of sweetness (via Wikipedia):