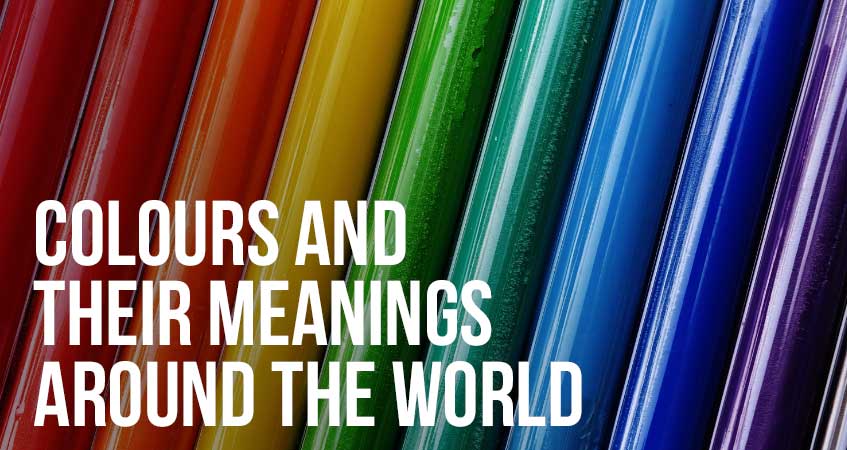 When you see the colour black, what do you think of? Death? Funerals? Johnny Cash? The answer depends, in part, on where you’re from. And that means the colours you use on your website and in your advertisements can affect the message your international audience receives, in ways you might not intend.

How well does your business colour scheme translate? Find out with our international marketing cheat sheet to colour meanings around the world:

It’s the colour of blood, the colour of wine, and the colour of rubies. In any culture, red is an attention-getter, and there’s probably a reason for that. According to the BBC, “Wearing red can change your physiology and balance of hormones and alter your performance in a football match.”

But what kind of attention will red attract for your business? That depends in part on where you’re marketing.

Orange is the colour of firelight, and of leaves in the fall. However, it has a variety of meanings around the world, and some of them are much less comforting.

Yellow is the colour of sunlight. Brands like IKEA, Lipton and McDonald’s use yellow to give their logos an optimistic, happy vibe. . . but those associations are far from universal.

Green is the colour of grass and leaves, which is why it often represents nature. It’s usually considered a calming colour. The line between blue and green can be difficult to draw, though, and in some languages, it’s not named as a separate colour.

Calm, tranquil blue is a favourite colour for international brands. Although its meanings vary across cultures, they are almost universally positive.

Because purple dye was historically expensive to produce, it is often associated with wealth.

What about black? All of the colours of the rainbow mixed together, turning into the colour of night, darkness, and shadows. Perhaps it’s not surprising that the colour black has so many symbolic meanings around the world.

White is most commonly used as a background colour, with no significance of its own.  That said, it’s still worth looking at what it means in different cultures.

These are all just general guidelines. Knowing your audience is key, as always. Culture is a huge part of that, but it’s not always the whole story.

Tags: international marketing Marketing
Previous Post The Vital Ways Transcription Services Help Improve the Lives of the World’s Most Vulnerable People
Next Post Festive Christmas Songs From Around the World

3 thoughts on “Colours and their Meanings Around the World”