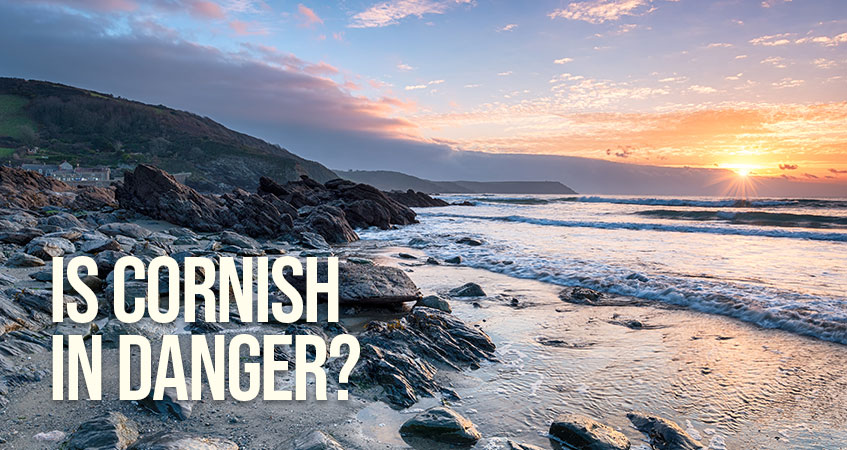 According to a new study, the Cornish language is in trouble. Big trouble. Researchers at University College have listed it as one of 33 languages “at risk of dying out,” along with Jersey French, Guernsey French, Manx and others.

However, in the Western Morning News, Cornwall councillor and Cornish Bard Bert Biscoe disputed that assessment. According to Biscoe:

“Knowledge and awareness of the language is growing really rapidly. There are several hundred fluent speakers and they are dedicated to teaching the language and passing it on. The numbers of people developing fluency in Cornish is increasing almost daily.”

So which is it? Is Cornish flourishing, or about to kick the bucket? Perhaps a little of both. The language began to decline after the 13th century. The number of Cornish speakers dropped rapidly after the failed Prayer Book Rebellion of the 15th century.  By the 18th or 19th century, it was considered extinct.

Efforts to revive the language have been in progress since the late 19th century, and great strides have been made. It was officially recognized as a minority language by the UK government in 2002, and UNESCO changed its status from “extinct” to “critically endangered” in 2010. Bert Biscoe is correct that the number of Cornish speakers has been growing, and there were 2,000 fluent adults as of 2008.

Even University College professor Christopher Moseley believes that with enough effort, the language can be saved. What really matters is whether or not the language gets passed on to the next generation. So far, a small number of people have been brought up as native bilinguals of both English and Cornish. Will they do the same with their own children? Will children who study Cornish in school today teach it to their future children? The future of the language depends on it.

Meanwhile, travel planning company GoEuro is promoting tourism to these areas as a way to save the languages on the list, according to Mashable. Do you think that’s a good language preservation strategy? We’d love to hear your take in the comments.