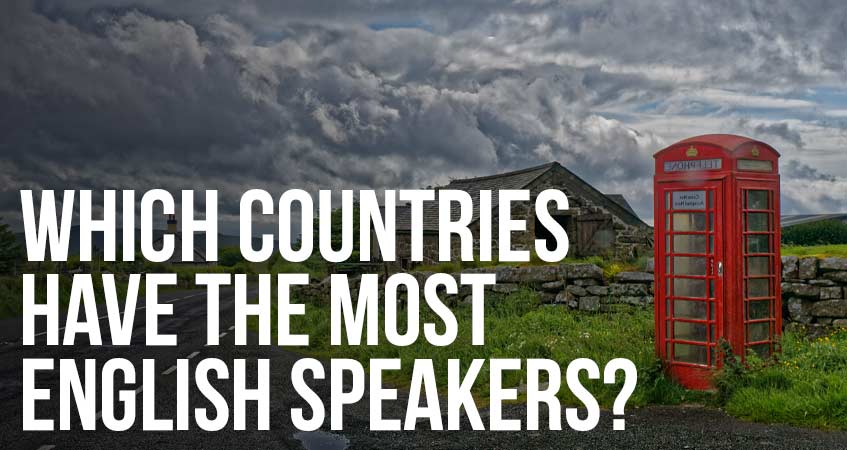 No surprise here: Those arrogant former colonists may not speak the Queen’s English correctly, but they do have the world’ s largest English-speaking country. Approximately 225 million Americans speak English as a first language, while 43 million speak it as a second language.

India is next on the list, with 125 million English speakers. But only 226, 449 of those speak it as a first language. For the rest, it’s a second language.

However, as BBC reporter Zareer Masani noted in a 2012 article, the patchwork state of English education means that many Indians speak “not so much English as Hinglish, or what my parents’ generation called Babu English – the language of clerks.”

Surprised?  English is one of Pakistan’s official languages, along with Urdu. Although virtually nobody in Pakistan speaks English as a first language, around 49% of the population do speak it as a second language.

The Philippines has two official languages: Filipino and English. Only around 37,000 Filipinos speak it as a first language. However, a little over 92% of the population can speak it as a second language.

English is the official language of Nigeria, with somewhere between 79M and 100M speakers.

A growing economy with a vibrant literary and entertainment scene

Nigeria is also home to world-renowned authors who write in English. You may have heard of Chinua Achebe, the Man Booker-prize winning author of Things Fall Apart who died in 2013, or Nigerian poet and Nobel Prize-winning playwright Wole Soyinka. But there’s also Chris Abani, who was imprisoned twice as a teenager after publishing books the government at the time considered suspect. And there’s Chimamanda Ngozi Adichie, a novelist, feminist writer, and short story author. Meanwhile, Nigerian author Chigozie Obioma’s novel The Fishermen won several awards and is being translated into 15 languages.

Nigeria is also the largest economy in Africa, and it’s expected to have the highest GDP growth in the world between now and 2050. Meanwhile, the Nigerian film industry is the third-most-valuable in the world.

As an aside, ever wonder why so many well-known email scams originally came from Nigeria, as opposed to another country? There are a lot of reasons, but the relatively high percentage of English speakers is probably one of them. Around 53% of the population in Nigeria can speak English, which means that a small percentage of those people (by no means representative of all Nigerians) can use their English skills to claim royal descent and a big fat inheritance. With a hefty pay-out for you, dear blessed one, if only you’ll kindly wire them the transfer fee.

Most Nigerians despise scammers and deplore the damage they’ve done to the country’s reputation. However, every country has a few bad apples, and in Nigeria, some of those bad apples used their English skills to become famous for a specific type of email scam called “advance fee fraud.” Other countries have their own specialities, and when it comes to Internet fraud as a whole, most of it actually comes from countries other than Nigeria, and continents other than Africa. For example, Russians are known for hacking restaurants and stealing customer’s data, and Estonia is a hotbed of clickbait fraud.

Also, these days, that “Nigerian Prince” offering to share his wealth via email could just as easily be an old white guy from Louisiana.

It’s about time, right? 98% of people in the UK speak English. But the UK’s comparatively small size and small population mean that larger countries like Nigeria and the Philippines actually have more English speakers.

Countries With the Highest English Proficiency

Obviously, numbers don’t tell the whole story here. Which countries have the highest English proficiency –  the highest percentage of people who can speak English well? To answer this question, let’s take a look at results from EF’s English Proficiency Index (EPI). EF is a company that administers English exams to companies. (Not coincidentally, they also promote the idea that English should be the world’s “common language” for business. And there are some questions about what constitutes “good”  English- one criticism of the EF is that they promote US/Canadian/UK  varieties of English while stigmatizing the natural evolution of the English language in other countries.)

Excluding English-speaking countries like the US and the UK, here are the 5 countries where professionals are most proficient in English, according to EF:

90 percent of people in the Netherlands speak English, and their EPI score is 73.8, which is the highest of any country they tested.

The Nordic countries are known for their English skills. See the next three countries on this list? Denmark has a slight edge over the other three, with an EPI score of 72. 91% of the population speaks English as a second language.

90% of Swedes speak English as a second language. The country has an EPI score of 71.7.

90% of Norwegians speak English as a second language. Their EPI score is 71.3.

70% of Finns speak English as a second language, with an EPI score amongst professionals of 69.2.

The only country to rank in the top 5 for both numbers of English speakers and English proficiency, the Philippines has an EPI score of 67.4.

What This Means for Translation

So, if you’re trying to do business in one of these countries, will you still need to invest in translation? Probably so. Translation is still important. Remember, India may have 125M English speakers, but that’s only 12% of their population.  Of course, the amount of translation help you’ll need depends on factors like the nature of your business and the target audience for a given piece of content.

As EF noted in the Harvard Business Review,

“Not a single country surveyed has workforce English proficiency that qualifies as “advanced” — level C1 or C2 on the Common European Framework of Reference for Languages.”

And that’s among professionals, who are more likely to be educated and have access to English classes.

Plus,  even when people can speak English as a second language, that doesn’t mean that’s the best way to communicate with them. 75% of people prefer to buy things in their native language, even when they can speak English.  And of course, when it comes to translating product packaging and other communications with customers, consumer protection regulations often require accurate translation.

Need help with translation for your business? We provide an entire range of document translation services.

90 thoughts on “Which Countries Have the Most English Speakers?”