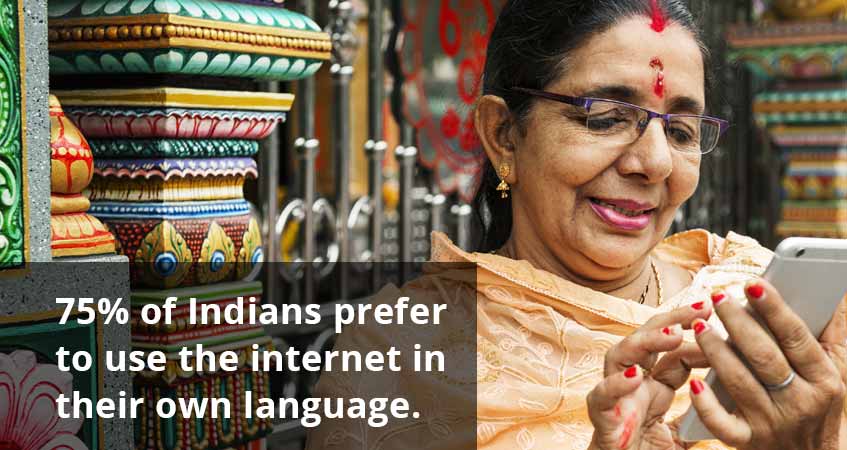 The Internet has long been dominated by English-language content, but that may change over the next few years. The New York Times reports that many companies are responding to increased demand for content in languages other than English by translating existing online content and providing new tools that help users create content in their native languages.

English may be the most popular second language in the world, but many people who speak it as a second language still prefer to communicate in their native tongue whenever possible, including online. For example, a survey of 50 million Indian Internet users found that even though most could speak English, ¾ preferred to read in the language they grew up speaking.

Language Use is Changing

However, people who want to communicate in languages other than English can face some rather frustrating obstacles. For instance, The New York Times describes how Indian engineer Ram Prakash Hanumanthappa wanted to use his native language, Kannada, to email friends and family. However, Kannada is written using a special script, and typing it on a regular keyboard involves using complex keyboard maps to create the special characters.

So, Mr. Ram Prakash created Quillpad, an online service that allows people to type in 10 Asian languages using the regular Roman alphabet. All you have to do is the spell the words out phonetically using a regular keyboard, and Quillpad converts what you typed into the correct script.

The success of Quillpad inspired Google to create a similar transliteration service. Google, Yahoo and Microsoft are all introducing services geared at making it easier for Indians to interact with computers in their native tongues. This can be challenging since Indians speak numerous regional languages.

Microsoft has introduced an initiative called Project Bhasha to create glossaries of computer terms and computer slang in regional Indian languages. Yahoo has teamed up with a Hindi newspaper publisher to create a Hindi portal called Jagran.com.

In addition to its transliteration tool, Google also offers Google News translated into Hindi and three other regional Indian languages. Other companies are working feverishly to translate their content into languages other than English.

The New York Times quotes Ram Prakash Hanumanthappa as saying of Indians, “You’ve got to give them an opportunity to express themselves correctly, rather than make a fool out of themselves and forcing them to use English.” As Internet use expands in India and other developing countries, the language of the Internet will have to expand, too.

More than one million new internet users are added each day. Many of them speak English as a second language or not at all. As a result, we're rapidly moving from an "English-first" internet to a more diverse multilingual web. This will create new challenges and new opportunities for businesses of all sorts.