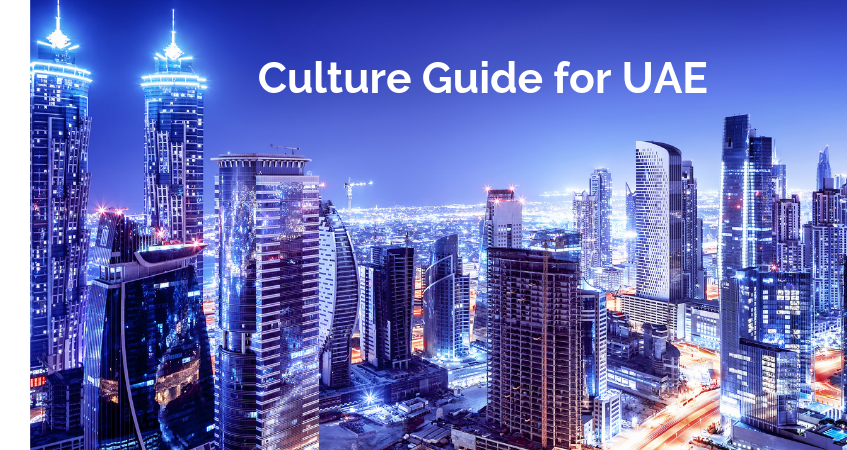 The United Arab Emirates (UAE) in Western Asia is made up of a federation of seven emirates: Abu Dhabi, Ajman, Dubai, Fujairah, Ras al-Khaimah, Sharjah and Umm al-Quwain. Abu Dhabi serves as the capital, with each emirate ruled by its own monarch.

The UAE offers a fascinating business environment. Of its 9.2 million residents, just 1.4 million are Emirati citizens – the other 7.8 million are expats. Around 120,000 of those expats are from the UK. The prevalence of expats in the UAE makes for an exciting melting pot of cultures, which this business culture guide seeks to help UK exporters navigate their way around.

Arabic is the official language of the United Arab Emirates. The UAE is also home to a range of widely spoken minority languages, thanks to its substantial expat population. Urdu is the second most spoken language, with French, Russian, Hindi, Tagalog, Mandarin, Tamil and Indonesian all spoken as well.

English is widely spoken across the UAE and many of those who live there feel no need to learn Arabic. This can be beneficial for English companies looking to do business in the UAE, though Arabic translation services may well still be required for contractual agreements and other forms of legally binding paperwork, as almost all paperwork will usually be in Arabic.

The UAE ranks as the 24th most connected country in the world in terms of the percentage of its population who are connected to the internet, with the figure standing at 90.6% as at June 2017. However, the UAE has plans to move rapidly up the rankings, with the latest figures from the FTTH Council Europe rating it as the most connected nation in the world in terms of penetration of fibre-to-the-home, at 93.7%.

This superb infrastructure allows Emiratis to enjoy high-speed internet speeds across almost the entire UAE, offering an excellent environment for both personal customers and business users. UK companies looking to set up operations in the United Arab Emirates can therefore be confident of enjoying decent connectivity while there.

The UAE has come a long way since its economy was so largely centred around oil. Around 70% of its GDP now comes from non-oil related sources. In terms of nominal GDP, the United Arab Emirates is the world’s 30th largest economy according to figures from the International Monetary Fund. It is the second largest Arab economy (after Saudi Arabia). When considered by GDP per capita, the UAE enjoys the 18th highest rate globally.

Tourism plays an increasingly important role in the UAE economy. Dubai is ranked (by the annual MasterCard Global Destination Cities Index 2016) as the fourth most popular destination city on the planet, and the most popular in the Middle East. It attracted 15.27 million international overnight visitors in 2016 – ahead of New York and Singapore. Dubai International Airport was the busiest in the world in 2016.

The UAE uses the Emirati dirham as its currency. The dirham was introduced in 1973, when it replaced the Qatar and Dubai riyal.

With regards to goods from the UK, the UAE’s top imports included power generating machinery and equipment, road vehicles, telecoms and sound recording and reproducing equipment and professional and scientific instruments and apparatus.

As a Muslim country, the United Arab Emirates has a noticeably different business culture to the UK. Localisation support services therefore play an instrumental role in enabling UK companies to enter and succeed in the UAE marketplace.

Developing personal relationships through face-to-face contact is a core component of succeeding at business in the UAE. Phone calls and emails can sometimes be seen as rather impersonal, so regular visits and meetings are important. Both Dubai and Abu Dhabi are popular exhibition locations, which provides plenty of opportunity for building up business relationships.

Legal translation services should always be used before signing any agreements with UAE partners. Business negotiations are often a very personal process and UK companies should take care to check that their understanding of what has been agreed has been reflected in the legal documentation.

The working week in the UAE is Sunday to Thursday, which UK companies will need to bear in mind when liaising with their UAE counterparts. Business dress is conservative, though there is no need for UK businesspeople to dress in the locally preferred kandura or abaya. Consideration of the UAE’s hot, dry climate is well worth bearing in mind when choosing business attire.

Key to business success in the UAE is respect for cultural differences. Learning a few words of Arabic will stand UK businesspeople in good stead. A handshake and a greeting of “As-salam alaikum” (peace be upon you) is an appropriate way to start a meeting. “Wa alaikum as-salam” (and upon you be peace) is the correct response. When meeting with businesswomen in the UAE, UK businesspeople should avoid shaking hands unless the woman in question initiates such a gesture. Coffee is often offered as a sign of hospitality at the start of meetings.

During Ramadan, particular care needs to be paid to professional conduct. Eating, drinking and smoking in the view of others (including in the car), is forbidden during Ramadan, and particular attention should be given to dressing modestly.

Strong ties exist between the UK and the United Arab Emirates. At present, more than 5,000 UK companies do business in the UAE, making it the largest Middle Eastern export market for the UK (and the 12th largest in the world). Major UK companies operating in the UAE include BAE Systems, Shell, Rolls Royce, HSBC, SERCO and Fortnum and Mason.

The diversity of the UAE’s economy, now that it has moved away from an over-reliance on oil, is one of several factors attracting UK companies to trade with the UAE. The country ranks 31st in the World Bank’s Ease of Doing Business report and first in the Middle East. As such, the UAE makes an excellent entry point for UK companies looking to sell their goods and services to Middle Eastern markets. The widespread use of English is also useful, although business translation services are essential for written documents such as contracts, while localisation support services are key to ensuring compliance with, and respect for, local customs.

If your business is considering exporting to the UAE, the professional team at K International can help. Contact us for further details of Arabic translation services, from legal and business translation to regulatory and compliance translation.

Previous Post Funny Expressions for Sickness from Around the World
Next Post German Translation Services: A Beginner’s Guide