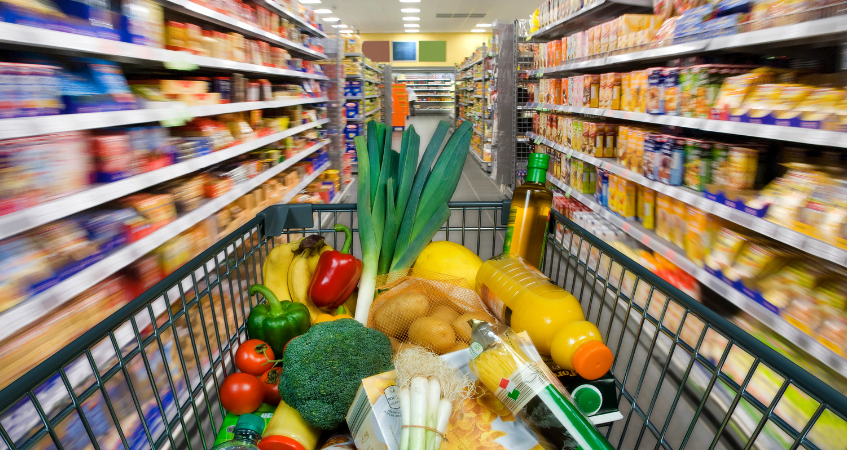 So how do Italians buy food, really? If you’re thinking of food markets in every town, brimming with people buying organic meat and vegetables directly from farmers, you may be in for a partial disappointment. In today’s Italy, most people buy their food at the supermarket.

That’s not to say that love for good food has disappeared. Modern life may be less bucolic, but supermarkets in Italy have come a long way in the pursuit of quality.

At first glance, Italian supermarkets are very similar to any store in the UK. However, if you take a closer look you’ll notice that some products occupy a different amount of shelf space. For example, you could find:

At the same time, you could recognise many current food trends: vegan, vegetarian, gluten-free, organic, etc.

In the peripheral areas of the store, a whole section is normally dedicated to fresh foods. Here, a large enough supermarket will have counters where you can buy meat, seafood, ham, cheese, bread and pastries directly from store assistants. That’s the in-store recreation of the local shop, and although the feeling is far from the original, you may get the same level of attention, especially if you are a frequent customer.

If you’re pressed for time, you can pick up the same food directly from open fridges. The offerings may be limited, but it’s usually the same food sold at the counters, which is pre-packaged by the supermarket staff.

On the other hand, fresh fruit and vegetables are always self-service, even in the largest stores. (The only place left, where you can buy them the old-fashioned way is the farmer’s market.) The process goes as follows: put a plastic glove on, choose your produce, put it in a transparent plastic bag, place it on a scale, digit the code and stick the price tag on the bag. Discount stores typically skip the last step, and produce is weighed directly at the till by the cashier.

A few words about the palm oil-free trend

Palm oil suffered a serious backlash in the EU because of its (real) environmental toll and (alleged) unhealthy effects. Italians seem to have taken this issue quite seriously. Brands started to remove palm oil from their formulations, especially in the bakery confectionery segment, and the caption “senza olio di palma” (“palm oil-free”) on packaging is now ubiquitous.

The last brand standing, undeterred by all the campaigns against palm oil, is Nutella: the ingredient is simply too important for the hazelnut spread, so Ferrero didn’t change the recipe. However, they had to start a PR campaign to make clear that their palm oil is sourced sustainably and that it won’t cause cancer.

Opposite trends vying for consumers’ attention

The way supermarkets are structured reflects how society in Italy has changed over the years. The trend is not that different from other Western societies. The typical large family with several kids, stay-at-home wives who take care of the house, and husbands as the sole breadwinners, has practically disappeared. Couples get married later in life (or don’t get married at all), have fewer kids, and there are almost as many employed women as there are men.

And then there are the effects of the economic recession, which dramatically reduced the disposable income of Italian families, even pushing many of them beyond the brink of poverty. Italy was hit harder than other EU countries, and it’s the last one to be showing signs of recovery. According to a research by Federdistribuzione (the association of large distributors), the part of income spent on food went from 19.2% in 1991 to 11.4% in 2015 [Italian: page 8].

With people living busy lives, with less time to dedicate to buying food and less money to spend on it, the food distribution market had to change and adapt. The result is a somewhat complex scenario where modern trends and tradition coexist, sometimes pulling in opposite directions.

Higher profits in the face of recession

Smallish stores (but lots of them)

Considering that Italy is one of the EU countries with the highest number of SMBs[page 11], there are unsurprisingly few large stores: only 1.4% the total. Almost half of the supermarkets are medium size, between 1,000 and 4,000 ft². Consumers won’t be hard-pressed to find places to buy food, though: after Germany, Italy has the most store space available, with 32 ft² per person.

Producers and buyers: David and Goliath

In the meantime, in the background, the relationship between buyers and producers is often problematic.

In recent years, retailers and consumers have joined forces in different ways (e.g. through cooperatives, partnerships, consortia, etc.), forming large buying groups. Together, they’re often able to get large volumes for very low prices, and pass the discount down to consumers to fuel their daily price wars. On the short end of the stick, there’s a scattered group of small food manufacturers and farmers, who are forced to accept very low profit margins. At least, until they start getting together like their counterparts did.

The resistible rise of the private label

Private labels are another notable contradiction in Italy’s food distribution market. Although their market share has been growing steadily over the years, it’s still quite low[Italian]. In 2016 it was only 18%, which is almost 10% lower than the EU average and light years away from the 45% in the UK. Every big food retail chain has its own private label now. For the two largest players in particular, Coop and Conad, sales of private labels are way over the country average, reaching 25%.

The truth however, is that traditional brands are still quite strong, which is why large retailers are pursuing a sort of double-faced marketing strategy: while they’re fulfilling the significant demand for cheaper, no-frills products, they can’t base their profits solely on them.

That’s why private labels (whether self-branded or independent ones) are placed on the shelves side by side with traditional brands. To further complicate the scenario, food manufacturers often work for both traditional and distributors’ brands.

The economic downturn definitely helped the success of private labels, expanding the category of bargain hunters. However, it would be too simplistic to define them as a cheaper, lower-quality option for those who have less disposable income.

First of all, distributors don’t need to spend money on marketing, so their self-branded products tend to have a higher price/quality relationship. From simple distribution channels for products, supermarket chains are becoming brands in their own right. That brand power is allowing them to expand their portfolio of brands, offering premium products to cater for a more demanding clientele. For example, Carrefour Italia created Filiera Qualità, while Conad has several labels covering different healthy eating trends (bio, fair trade, regional, certified origin, etc) as does Coop.

What about independent stores?

We only talked about large retailers and distributors so far. What about independent food stores and street vendors? They have far from disappeared, but their presence in the market has been relentlessly eroded by large operators. According to Federdistribuzione, between 2000 and 2015 independent retailers lost 10% of market share [Italian: Page 21].

While the supremacy of large operators in the food sector is undisputed, independent retailers are holding their ground on the non-food segment (e.g cosmetics, clothing, consumer electronics, etc) with 55.2% market share [Italian: Page 22] (although it was 71.5% fifteen years ago).

Like any other society, Italy is also evolving, although traditional attitudes towards food are still strong. People have less money and time available, but attention to food quality is still in their DNA. Consumers discovered that they can find quality also with brands they don’t see on TV, and for cheaper prices, and trust discount chains more and more.

Large retailers were very good at damage control during the recession and are taking advantage of their buying power to build themselves a self-standing brand identity. Their overall strategy is clearly to replace the traditional custodians of food quality: local shops and traditional brands. While that worked to an extent with the first, they were much more successful with the latter: independent food stores haven’t disappeared, but they have to target the gourmet food niche in order to survive.

This post originally appeared on LinkedIn. Sara is a Project Manager at K International Language Services, managing global translation projects for retailers and brands. Keen to learn more about us? Visit our specialist page on retail localisation.