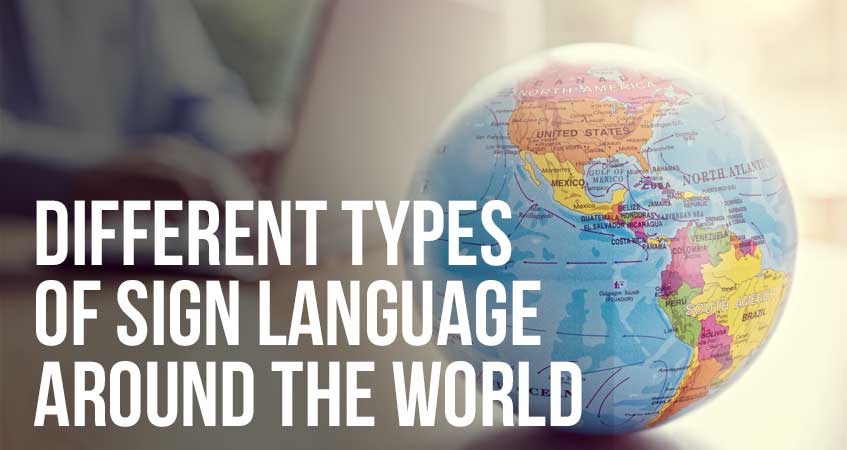 One of the most common misconceptions about sign language is that it’s the same wherever you go. That’s not the case. In fact, there are somewhere between 138 and 300 different types of sign language used throughout the world today. New sign languages frequently evolve amongst groups of deaf children and adults.

With that in mind, let’s take a look at 9 examples of sign languages from around the world:

Around 150,000 people in the UK use British Sign Language.  BSL evolved at Thomas Braidwood’s schools for the deaf in the late 1700s and early 1800s. From there, it spread to Australia and New Zealand. Auslan (Australian Sign Language) and New Zealand Sign Language are therefore quite similar. They use the same grammar, the same manual alphabet, and much of the same vocabulary.

Auslan includes some signs derived from Irish Sign Language, as well. Deaf Indigenous Australians may use Auslan or one of the native Australian sign languages that are unrelated to Auslan. The Far North Queensland dialect of Auslan incorporates features of these indigenous sign languages, too.

Charles Michel de l’Épée is sometimes credited with inventing LSF.  In reality, all he did was take the rich sign language already used by the Parisian deaf community, add a bunch of rules to make it impossibly complicated, and then establish a free school for the deaf to teach his version of the language.

But even though he couldn’t resist tinkering,  he was willing to accept sign language as a complete language on its own merits. And because he founded a school where deaf students could gather and were encouraged to use sign language to communicate, French Sign Language flourished until “oralism” became all the rage in the late 19th century.

Students were discouraged from signing in schools from the late 1800s until the late 1970s. However, the deaf community continued to use French Sign Language to communicate with each other, and in 1991 it was once again incorporated into education.

Americans and Brits are often said to be “divided by a common language.” But the deaf communities in the two countries don’t even have a common language. BSL and American Sign Language are not even in the same language family.

250,000-500,000 people in the United States claim ASL as their native language. It’s also used in Canada, West Africa and Southeast Asia. ASL is based on French Sign Language, but was also influenced by Martha’s Vineyard Sign Language and other local sign languages. Like French Sign Language, ASL uses a one-handed fingerspelling alphabet.

One interesting footnote about ISL: Many Irish deaf students were educated in Catholic schools that separated students by gender. So, for a time, men and women each had their own dialects of ISL. However, these differences have diminished over time.

Anywhere from 1M to 20M deaf people in China use Chinese Sign Language to communicate. However, it’s difficult to determine how many people actually use it because the Chinese education system has discouraged and stigmatised its use for most of the past five decades.  Most deaf Chinese children are treated at “hearing rehabilitation centres,” which favour a strict oralist approach. That said, more Chinese schools for the deaf have opened in recent years, and Chinese Sign Language is slowly gaining acceptance.

The first Chinese school for the deaf was founded by American missionaries. However, Chinese Sign Language is not related to ASL. Many signs incorporate aspects of Chinese language and culture. For example:

Indo-Pakistani Sign Language is the native sign language in South Asia. However, it lacks official recognition and support. While it’s not taught in public schools, some NGOs do use it to teach both academic and vocational courses. Unfortunately, the interpreter shortage for Indo-Pakistani Sign Language is dire. In India, there are only about 250 certified sign language interpreters, and between 1.8 million and seven people who are deaf or hard of hearing.