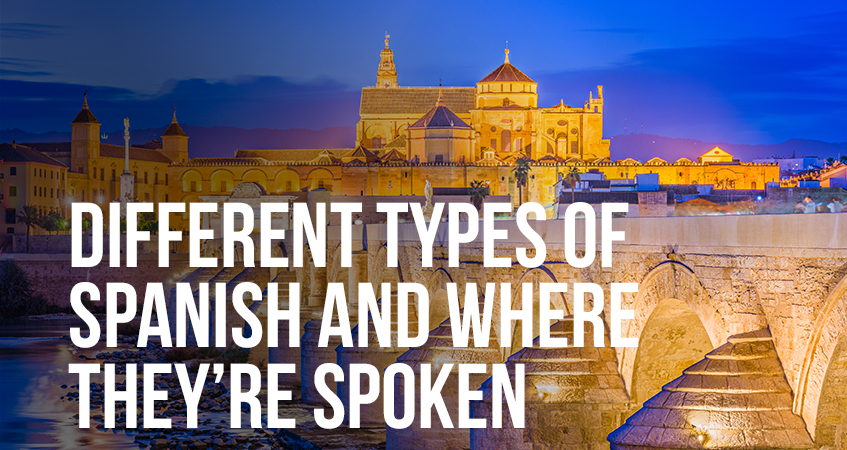 With 405 million native speakers,  Spanish is the second-most commonly spoken language in the world.  But while all of those 405 million people might speak the same language, they don’t all speak it the same way.

So, let’s take a look at the different types of Spanish, where they’re spoken, and what that means for organizations doing business in Spanish-speaking countries.

How different are the different types of Spanish?

There’s not as much variation between the various Spanish dialects as there is between dialects in other languages. Most Spanish speakers, no matter where they’re from,  can understand each other simply by speaking more slowly, listening carefully and using context clues for unfamiliar vocabulary.

That said, here are some key facts and statistics about where Spanish spoken and how it differs from place to place:

90% of Spanish speakers are Latin American, though indigenous languages are also spoken throughout Mexico, Central, and South America. In the Latin American market, the largest Spanish-speaking countries are:

Spanish in the United States

Wait a minute . . . the United States! Actually, yes. The current government may be refusing to offer as much in the way of support as previous administrations did, but Spanish speakers in the United States aren’t going away.  There are at least 50 million Spanish-speakers in the US.  New Mexico and Los Angeles even have their own Spanish dialects.  And of course, there’s also Spanglish, an English-Spanish hybrid that Amherst professor Ilan Stavans has called “a mestizo language.”

The key differences between European Spanish and Latin American Spanish

The Many Forms of You in Spanish

One of the most noticeable characteristics that sets European Spanish and Latin American Spanish apart is the many Spanish words for “you.” English, of course, only has one word for you, whether you’re talking to the Queen or to the person next to you at the bar. And unless you’re in the American South (Hi y’all!), if you want to indicate that you’re talking to more than one person, you’re stuck with relatively awkward phrasings like “you all” or “you guys.”

Spanish, on the other hand, uses different pronouns and verb endings to distinguish between you (singular) and you (plural), as well as between you (informal) and you (plural).  So, in both Spain and (most of) Latin America, if you’re addressing one person informally (say, two friends or family members talking, or an adult talking to a child), you’d use tú. When addressing one person formally, you’d use usted.

But what if there’s more than one person? If you’re in Spain, you’d address a group of friends or peers as vosotros and a group of people you don’t know well or need to show respect to as ustedes.

But in Latin America, they stopped using vosotros in the 1800s.  For addressing groups of people, ustedes is used exclusively.

And if you’re in Argentina, Uruguay or Paraguay, you’d use vos instead of tú.

Even so, there are numerous differences, too many to list here. For example, in Spain, a car is a coche. In Latin America, depending on where you are, it could be an auto or a carro.

Meanwhile, a cellular phone is a teléfono móvil in Spain and a teléfono celular in Latin America.  These differences might not matter in casual conversation. But if you’re a business, trying to speak to customers in a voice that sounds authentic and natural to them, word choice matters more.

And of course, sometimes vocabulary differences can lead to unintentional embarrassment. For example, consider the word “coger.” In Spain, it’s a perfectly innocent, inoffensive, commonly used word that means “to take” or “to catch.” You could say it in church. You could say it to your grandma.

But in some parts of Latin America, the meaning of “coger” is rather different. And more vulgar. In fact, it corresponds to a certain vulgar four-letter word for the act of sexual intercourse.

Slang, of course, varies by region, just as it does in English. Again, this is generally not a problem in casual conversation, but it’s something marketers, in particular, should be aware of, especially if the younger crowd is your target audience.

In Spain, people tend to pronounce “z” sounds as “th”  when they come before vowels. “C” is pronounced the same way when it comes before “i” or “e”. This is called “distinction.”

Of course, “European Spanish” and “Latin American Spanish” are extremely broad categories. Wherever Spanish is spoken, you’ll also find plenty of regional variations and idiosyncrasies.  Here are some of the most distinctive regional dialects.

Español Rioplatense is spoken in Argentina and Uruguay. It is notable for using an intonation that sounds more like Italian than Spanish. It also uses a “sh” sound instead of a “y” sound for the letter ll.

People in Cuba, Puerto Rico, the Dominican Republic and all along the Caribbean coast of Mexico and Central America speak Español Caribeño. This dialect is one of the most difficult for Spanish speakers from other regions to understand. It is characterized by dropping certain consonants, like s, r, d, and b in the middle or at the end of most words, and by swapping some consonant sounds.

This is Spanish as it’s spoken in Equatorial Guinea, a small West African country that was formerly a Spanish colony.  It sounds closer to European Spanish than Latin American Spanish, but its grammar and vocabulary has also been influenced by regional African languages. And Equatoguinean Spanish also uses the preposition en when other Spanish dialects would use a.

Babbel has a video with lots of examples of the different types of Spanish .  . . and puppets!

Looking for Spanish translation? Our translation team will ensure your message comes through clearly in all of your target Spanish markets. Check out our comprehensive suite of language services, and contact us to discuss your project!