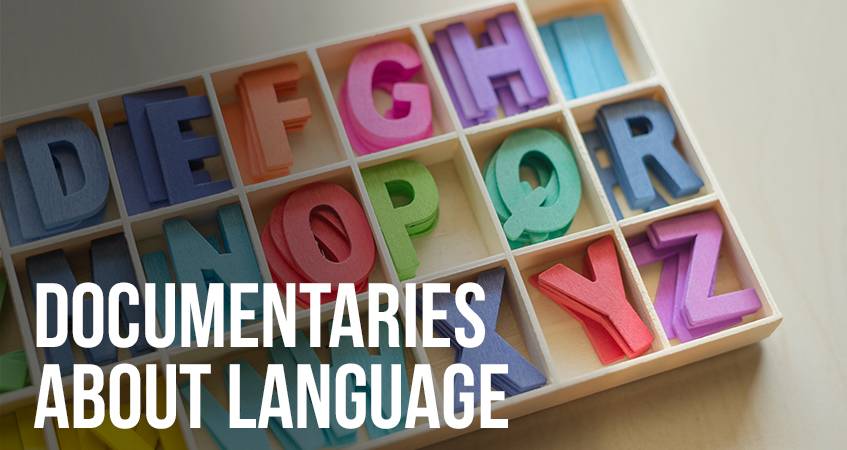 We’re so lucky that language is at the centre of everything we do at work. Let’s take a moment to stop the clock to appreciate how beautiful it is and maybe even look back at what inspired us at an early age to take a career in the language industry. To help here are my favourite documentaries of all time about language.

The Story of English

I am biased but it’s a fact that English is more influential than any other language. The first episode of this documentary sets out to provide evidence of that and to explore how the language has evolved. The story begins with an English language rock concert in Russia; the English influence was so strong that it even managed to break through the Iron Curtain. Further images show English as the universal language of air-traffic control, computer data, newspapers, telegrams, international trade and world news. American English is the original language of the movies, and the world of music is dominated by English-language songs.

The tour of the English language takes viewers from elite-Public-School English to the BBC wireless broadcasts that sent that very English over the airwaves and into the homes of people from all classes. For the first time, the Queen’s English was now considered by many to be the correct English.

Decolonisation removed Britain’s political influence from around the world, but the English language remained behind. India, Ghana and Nigeria are all countries that have English, or a form of English, as a link language. It’s the common thread in the midst of the diversity that comes with multi-language countries.

In all of the ex-colonies, English has evolved, and each country has its unique form. In fact, language is never static. As interviewees provide definitions of modern-American-slang terms, that fact becomes increasingly obvious. The idea of one correct form of English is set aside in favour of acknowledging the diversity.

Is the Man Who Is Tall Happy?

Gondry interviews political activist, philosopher and linguist, Noam Chomsky. Animated drawings provide a more light-hearted visual aid to the topics discussed. Throughout the film, Chomsky’s answers combine his linguistic expertise with his philosophical questions. His experience in Hebrew school, his thoughts on the Holocaust and his beliefs as an atheist, are all open for discussion. Although not religious himself, Chomsky is sympathetic to the value of religion, if it’s meaningful to the person. That thought encompasses much of his worldview as a philosopher and as a linguist; it’s all about finding meaning.

Children should be taught to question and to challenge. Those beliefs are the foundation for Chomsky’s contribution to linguists. Language-learning ability is innate, yet so also is the ability to process and structure that language. His interviews describe how he pushed the linguistic boundaries and began to break away from conventional-linguistic thought. It all started with his undergraduate thesis, a study of the Hebrew language. What began as the expected structured analysis of data, later became Chomsky’s move into generative grammar. Rather than continuing to ask the same “ridiculous” questions, to which he already knew the answers, he began to search for rules and structure within the language. Such a move then allowed him to generate correct sentences.

As Chomsky speculates on how mankind may have first evolved into using language, one thing is certain: language acquisition was an advantageous development for mankind. It provided the capacity for thought, thinking and interpretation. Due to copyright infringements I can’t embed the youtube clip of the whole thing, so below (I’m sorry) is just the trailer.

Why Do We Talk? BBC Horizon

Despite decades of research, how we learn to talk remains something of a mystery. A series of experiments explore why we talk and how that defines us as humans. Hidden cameras capture the first three years of a child’s language development. Researchers discover that chimps cannot produce speech even after receiving significant language input. In an attempt to further understand language learning, newborn babies are monitored as they listen to different voices speaking. An autistic man who speaks 20 languages is studied as he begins to add another language to his repertoire.

The “forbidden experiment” is finally carried out, albeit with birds rather than with human babies. The results show that if humans function the same way as the birds, then language learning really is innate. Birds who were isolated from the rest, and thus not taught to sing, were thwarted in their voice development. They learnt to croak rather than to sing. However, each generation progressed and by the fourth generation the birds were singing normal song. The conclusion is that if we were never exposed to language, we’d probably develop it within a few generations. The final study shows a succession of volunteers learning an invented language. Each participant unknowingly created changes in the language and those changes were passed on to the “next generation.” The final results had a structure and order that wasn’t present in the “first generation.” Language evolves as each generation continues to make changes.

Half of the world’s languages are on the verge of extinction. In The Linguists two professors set out on a fascinating journey to discover some of those languages and to record them. Viewers are invited to listen to, “words that are barely spoken before they are never heard again.” The trailer provides short clips of some of these words, an appetiser to entice viewers into watching the film. As they pack their tent and head off to foreign lands, it’s a journey into the unexpected. Since most of these languages are to be found in isolated communities in the back of beyond, there are risks of sickness and political problems. The professors enter areas controlled by separatists, giving a glimpse of some of those risks. Above all, their enthusiasm prevails. Their mission is to document languages that will go extinct during their lifetime.

And last but not least… some genius from Stephen Fry via this clip from A Bit of Fry & Laurie. “Perfectly ordinary words but never before delivered in that order.” I bet you can’t watch it without laughing out loud.

What are yours? Have I missed any? Let me know in the comments below… thanks.