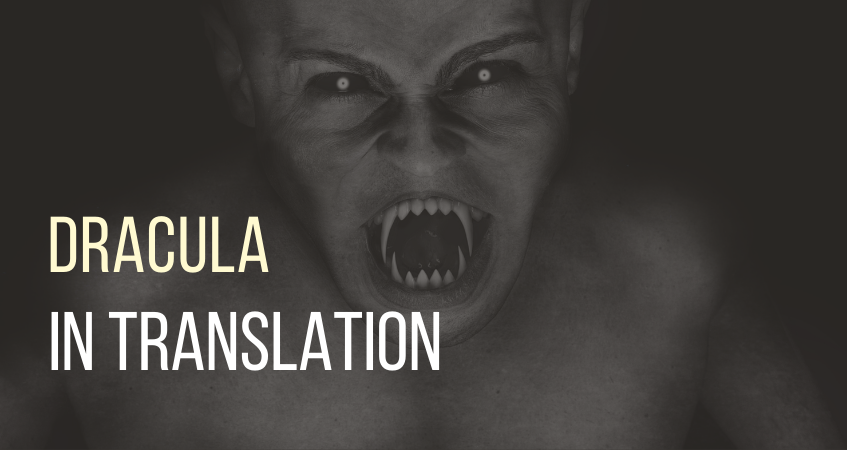 It’s almost Halloween! That means it’s an excellent time to reread your old horror favorites like Bram Stoker’s Dracula. Most cultures have some sort of indigenous vampire mythology. But Stoker’s novel helped spread the modern, Western image of the vampire around the world.  What dark, supernatural powers made it so influential?

The power of translation, of course! Here are 6 facts about Dracula around the world that you might not have heard before.

Dracula is available in at least 29 languages.

Dracula has been continuously in print since it was first published in 1897. During that time, it has been translated into at least 29 languages. That’s not quite Translation Hall of Fame material but it’s not too shabby, either.

Dracula’s origins are lost in translation.

Many people think Stoker based Dracula on the historical Wallachian ruler Vlad III, or Vlad the Impaler. But this is likely a myth. There are certainly some similarities between the two figures. For example, some English speaking texts call Vlad Tepes “Voivode Dracula.” And the Count talks about fighting Turks as a mortal. But there’s not much evidence that Stoker modeled his fictional vampire on Vlad the Impaler.

Why the confusion? In the introduction to Powers of Darkness: The Lost Version of Dracula, Bram Stoker’s great-grandnephew Dacre Stoker explains that the common misconception is possibly due to a translation error:

“[T]he mistranslation of a 15th-century poem dramatically changed the poet’s intent and poet’s intent and let to a misleading interpretation of Bram’s intentions. In describing the cruel actions of Vlad Dracula III against Saxon traders in Transylvania, Michael Beheim . . . wrote that Vlad washed his hands in the blood of his enemies. A portion of the poem was translated incorrectly, telling of Vlad dipping his bread into a bowl and drinking the blood of his dead enemies, thus labeling him as a vampire.”

The first language Dracula was translated into was Hungarian.

Perhaps fitting for a novel set in Eastern Europe, the first time Dracula was translated from English was when it was translated into Hungarian in 1898. The Budapest newspaper Magyar Hirlap published it as a serial and as a single volume. In book form, it bore the somewhat awkward title of  Drakula: Angol Regény – Harker Jonathan Naplója, which translates to Dracula: English Novel — The Journal of Jonathon Harker.

An Icelandic translation of Dracula from 1901 is actually a different story.

The original Icelandic translation of Dracula is actually a different novel, with a different title and an altered plot. The Icelandic version is called  Makt Myrkranna, or Powers of  Darkness. Makt Myrkranna condenses the second part of the book, which takes place after the Count arrives in England. According to Dracula expert Hans Corneel de Roos,  the result is a novel “more exciting and elegant than Dracula itself.” Translator Valdimar Ásmundsson also made the original novel’s sexual undertones more explicit.

The Icelandic translation, in turn, comes from an earlier Swedish translation. The Swedish newspapers Dagen and Aftonbladet published a serial version called Mörkrets makter starting in 1899. But the Icelandic version is different from the Swedish version, too. In fact, according to the Iceland Monitor, “the Swedish text is more complete and contains scenes neither described in Dracula nor in Makt myrkranna.”

Researchers believe that Bram Stoker himself helped with the Swedish version.

In an early example of localization, the Icelandic version also uses phrases and language that recall old Norse sagas.

Dracula was translated into Japanese in 1956 by Teiichi Hirai.

The English version of the story is told mainly through a series of letters, diaries and journal entries. But in the Japanese version, Teiichi Hirai takes language from Japanese oral storytelling traditions to make the story both more exciting and more familiar to Japanese readers.

Obviously, it worked.  Hirai’s translation of Dracula was so popular that it set off a wave of Japanese translations of supernatural literature.

Most Romanians had no idea what Stoker’s novel was about until after the fall of communism.

In Dracula, much of the action takes place in Romania. However, Dracula was not widely available in Romanian translation until 1990, after the fall of Communism.  This led to a lot of confusion in the 1970s. Western tourists flocked to Transylvania but often left disappointed. Many of them were looking for the “roots” of Dracula, but the locals had no idea what they were talking about.

Of course, that is no longer a problem. Now, you can tour “Dracula’s Castle,” visit Vlad the Impaler’s birthplace, and more.

These days, Dracula (and vampires in general) captivates audiences around the world. Do you want your brand to do the same? Talk to our team of translation and localization specialists!

0 thoughts on “Dracula in Translation”