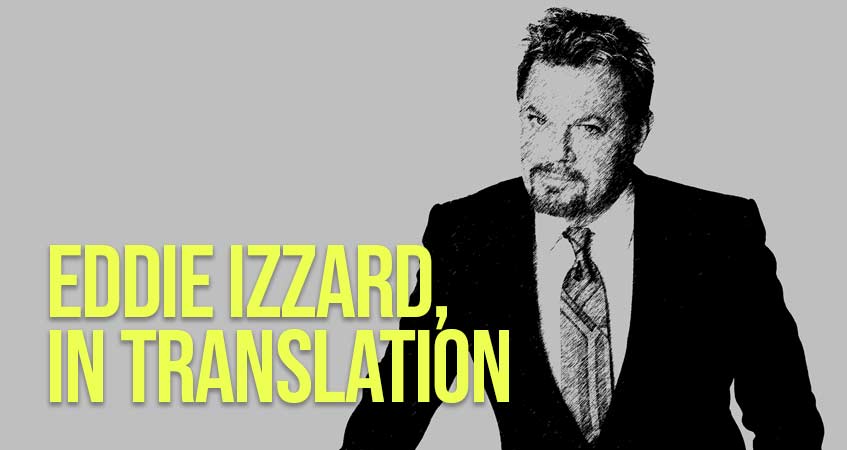 Conventional wisdom says it’s difficult to translate a joke. British comedian Eddie Izzard disagrees.  With his Force Majeure tour, he has been performing his stand-up comedy routine in English, French and German and he plans to add Spanish, Russian, and Arabic to the mix before it’s all said and done.

In an interview Izzard explained:

Izzard’s brother Mike is a linguist who has been helping with the translations. Since the comedian is not fluent in these languages, his show has to be scripted with little room for ad-libbing or going off script.

At least one joke did not translate well into German- one in which Izzard compares an aging body to “two weasels, covered in gravy, nailed to the back of a tractor.”  It doesn’t make a lot of sense in English, but in German the rhythm was all wrong, too. Izzard tried alternate translations like “a washing machine filled with rodents” and ” two washing machines filled with frogs that have been sat on by elephants,” but he told the Pittsburgh Tribune Review he never quite got it right.

Still, having his act translated has opened up a lot of opportunities to perform for people around the world in their own languages. He told the Boston Globe he intends to visit 25 different countries:

“I will be touring Germany and the German-speaking countries, and France in French. And I think I can go to some parts of the Caribbean and play in French. And I could definitely play Beirut in French. I think that would work. So I’ve got all these options there. It’s fun. A great adventure.”

We’ve got a list of bad translation jokes if he wants some.