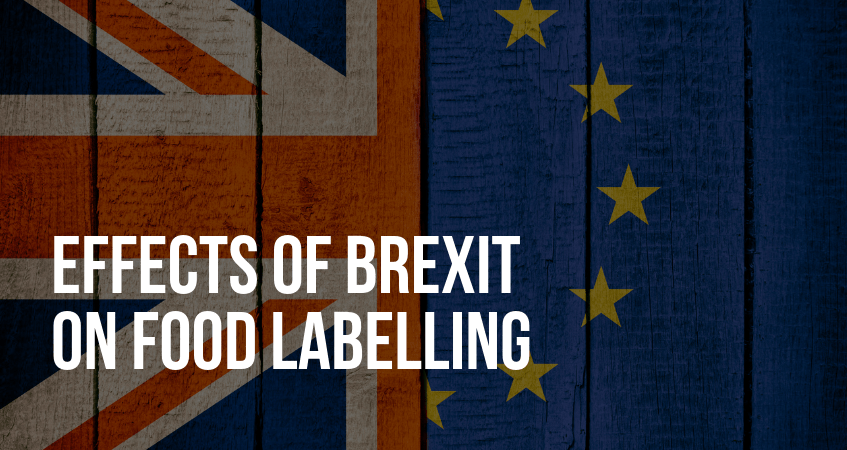 How will food labelling change after Brexit?

In this dragging post-referendum-before-Brexit period, with the results of the negotiations still largely unknown (exit at the end of October or extension? Deal or no deal?), all that is left to economists and business operators is forecasting future scenarios.

The food industry is no exception, with one of the main questions being: how are food labelling regulations going to change for business operators in the UK after Brexit? Regulatory compliance is a challenging aspect for food companies even in normal times. With radical changes ahead, the need to know is, understandably, even stronger.

The short (but very vague) answer is that some rules are going to change, while others won’t, and part of the changes will depend on the post-withdrawal scenario.

Before we dig into the details, however, a short but necessary digression to explain how the UK will manage the legal transition.

What is going to happen to EU laws after Brexit?

By the time divorce from the EU is finalised, the House of Commons will repeal The European Communities Act of 1972, which makes EU regulations predominant in UK law.

To avoid a colossal legislative void and confusion, all EU regulations will be either copied or adapted into the UK’s body of laws. After that, the UK – by then with no legal bond with the EU – will be free to modify these laws in the future.

The distinction between “copy” or “adapt” is an important one, because not all EU regulations will work seamlessly in an independent UK. As this white paper from the UK government explains, certain references typically included in EU regulations, such as “Member States other than the United Kingdom”, or “EU law” won’t apply after Brexit, and will need to be either modified or repealed.

With this distinction in mind, let’s look at what is going to change on labels of food products exported to the EU.

As a result of the legal adaptation, any reference to the EU will disappear from the UK law, and also from food labels.

British foods currently under one of the three European schemes that protect agricultural products and foodstuffs from specific areas will no longer display the scheme logo on the label. These are: Protected Designation of Origin (PDO), Protected Geographical Indication (PGI), and Traditional Specialities Guaranteed (TSG).

After the exit, organic UK products exported to the EU will no longer display the EU organic logo.

They can include references to organic farming methods, but in this case they will be subject to the import rules for non-Member states. Right now, the EU carries out no inspection on organic food from certain countries whose certification schemes are considered equivalent (see current list here https://ec.europa.eu/info/food-farming-fisheries/farming/organic-farming/trade ). Until the UK is included in that list, the importer of organic food will have to obtain a certification from one of the appointed control bodies.

Other indications of origin

The same principle will apply to any other indication of EU origin. For example:

An important addition: the name of the EU importer

While some parts of the label will be taken out, an important one will be added. UK food operators exporting to the EU will have to use an importer within the Community, whose name and address must be displayed on the label.

When are changes taking effect?

What is not going to change (for now)

Going back to the legal premise above, the rest of the former EU food labelling rules – those with no geographical reference – will continue to apply in the UK law. The main ones are:

Our main recommendation: stay up to date on the changes

When you consider the parts of food labelling that are not going to change, please remember that the “for now” part is actually quite important.

EU rules will continue to apply in the UK for the justifiable intention of lawmakers to avoid disruption and chaos in the legal system. However, from the day the ECA is repealed, the UK will be free to change any of these rules.

How far these changes will go, and how rapidly, will depend first of all on the outcome of negotiations. The two opposite scenarios, one where the UK is part of the EEA, and the other with no deal, will have very different effects on anything – directly or indirectly – related to international trade, including food labelling. The other thing to bear in mind is that the EU too may change its food labelling rules in the future.

The best thing food business operators exporting to the EU can do is to stay up to date with changes in either legal system. Regulatory compliance may just be about to become a double headache.

An Overview of Post-Brexit Food and Non-Food Labelling

31 December 2020 marked the end of an 11-month transition period for Brexit.

Your product label is the first thing potential customers see when they walk past your product in a store or browse your online shop. Unless they’re already familiar with your brand, the only information they have to make them want to purchase your product is the information on your package. Make sure its correct.