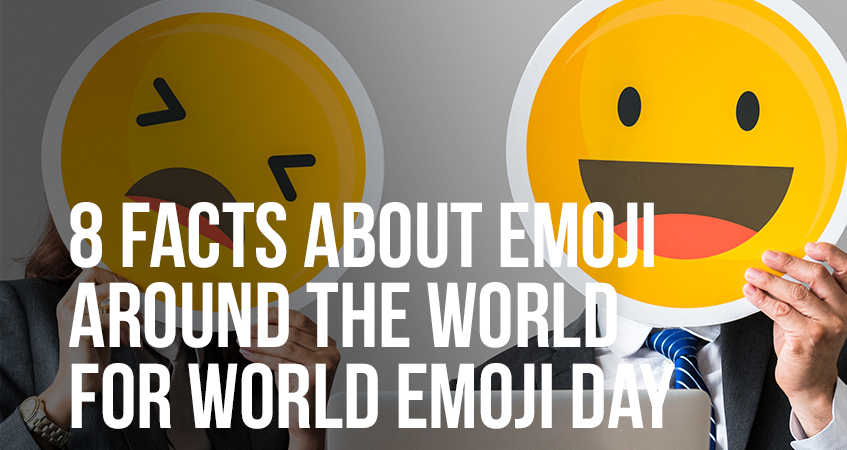 Monday was World Emoji Day. Over the past decade, these little icons have become essential to online communication. But how much do you know about them?

To celebrate, here are 8 facts you should know about emoji around the world.

Emoji were invented in Japan in 1999 by Japanese designer Shigetaka Kurita.

Why Japan? As Wired notes, linguistic and cultural factors may have played a role:

“Spoken, written, lived Japanese is rich with context, honorifics, and layers of meaning. Perhaps more than anybody speaking English or a European language could imagine, Japan needed some way to indicate the tone of a text.”

At first, emoji were confined to Japanese phones. But when Apple released the iPhone in Japan, the company soon discovered they needed to add emoji support to compete in the Japanese market. And when iOS 5 came out, emoji were suddenly easily available to iPhone users worldwide.

New emoji are approved by the Unicode Consortium.

How hard is it to come up with new emoji? Harder than you might think. In order for new emoji to be usable across different devices and platforms, they have to be approved by the Unicode Consortium.  The approval process can be difficult, and time-consuming, often taking a year or more.

69 new emoji were unveiled earlier this year, including a woman in a headscarf and 2 separate emoji of people in a sauna (one male, one female).  The people in a sauna represent Finland, of course, though the Finns would have preferred them to appear without the towel.  The “person with headscarf” emoji is the brainchild of a 15-year-old girl.

The top emoji on Facebook is the “laughing with tears” face.

The “face with tears of joy”???? is the most common in the UK. But in the US, it’s the slightly more tilted “rolling on the floor laughing” emoji. ????

“Heart eyes”???? is the most popular in Mexico and Brazil. And in Spain and Italy, it’s the “winking face blowing a kiss.”????

Meanwhile, in Facebook Messenger, the UK, Canada, and Thailand favor the heart. The US and India send the most ????’s, while Australia prefers the blushing smiley face. ????

Keith Broni of Ireland is the world’s first Emoji Translator.  His job is to “translate” emoji used in marketing, making sure they convey the right meanings and that the target audience won’t misinterpret them or find them offensive.

That’s more difficult than it sounds, because . . .

Emoji are not a universal language- in fact, they can be difficult to translate.

We may use emoji to clarify meaning, but they can still get lost in translation.

The same emoji can look startlingly different on different devices. And that means users may interpret it differently. A smiley-faced emoji on an iPhone might look uncomfortable or unhappy after arriving in a message on Android, for example. A gun on Android turns into a water pistol on Apple.

And once you add geography, language and culture into the mix, things become really interesting. For example, the innocent “thumbs up” we’ve all come to know and love takes on a completely different (and much less favorable) meaning in the Middle East. Facial expressions can also mean different things to different people, and culture influences how they are perceived.

Emoji can help people with aphasia express themselves.

An app from Samsung uses emoji to help people recovering from brain damage and strokes communicate. People with aphasia know what they want to say, but they can’t put it into words. And while we all have moments like that, for aphasia sufferers, this happens ALL THE TIME.  By making simple sentences out of emoji, they can keep communicating even without words.

What’s the plural of “emoji”, anyway? Some publications use “emoji” while others use “emojis.” Why the confusion? Emoji is a Japanese loanword. And in Japanese, it could refer to one or many emoji. As the Atlantic explains, when English borrows words from languages that pluralize differently, we usually just tack an “s” on anyway, like the cultural imperialists we are. But sometimes, we choose to keep the original plural form, as with sushi.

In the case of emoji, the two plural forms have been battling it out for years. Unicode and Apple use “emoji” as plural. But the rest of the Internet seemed to favor “emojis” as of January 2016.

My advice? Pick one and stick with it.

Are Emoji Becoming a Language?

It’s clear that emoji have taken over. But are they the universal language of the future, or merely a passing fad?

Spoiler alert: Probably neither. Sure, in theory, you could perhaps communicate exclusively in emoji. Both the Bible and Shakespeare have apparently been translated into emoji.  But that’s not how most of us use them and it’s not why the world is in love with them, either. Instead, emoji are a fun way to add context and emotion to our tweets and text messages. They help recapture some of the nuances of a face-to-face conversation. And they’ll probably stick around at least until we find a better way of doing that. If we ever do.

As always, businesses and brands wishing to use emoji in marketing need to be aware of how cultural differences can change the message their audience receives.  After all, a picture may be worth a thousand words, but are they the right words? Our team of marketing translation experts can make sure both words and images send the right message the right way to the right audience, all around the world.

What’s your favorite emoji? Let us know in the comments!

Previous Post 6 Ridiculously Bad Translations from Amazon Prime Day
Next Post Why Are There So Many Languages?