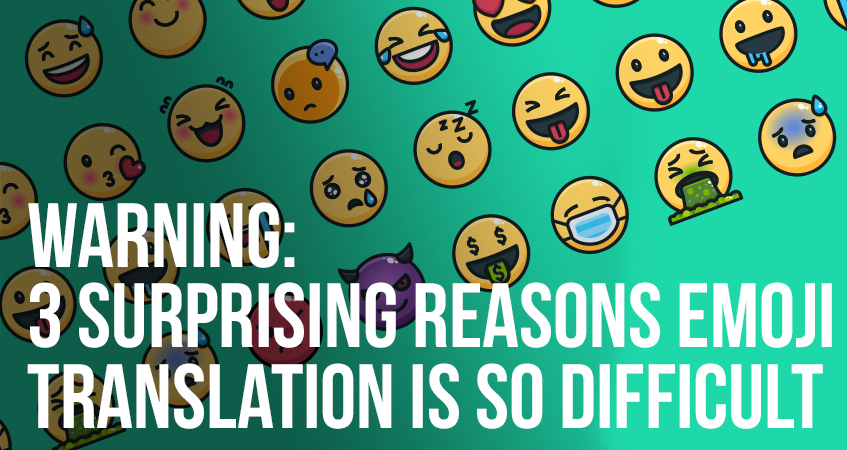 According to researchers from GroupLens, a research lab at the University of Minnesota, that clever emoji you just sent your friend may not mean what you think it means. Here are three reasons why emoji get lost in translation.

Emoji look different on different platforms, and this is perhaps the most common source of confusion. As GroupLens researcher Hannah Miller explained on the GroupLens blog:

To your smartphone, an emoji is just like any other character (e.g., lower-case ‘a’, upper-case ‘B’) and needs to be rendered with a font. Since each smartphone platform (e.g., Apple, Google) has its own emoji font, the same emoji character can look quite different on different smartphone platforms. This is why when a Google Nexus owner sends

to a friend with an iPhone, the iPhone owner will actually see

So although they’re the same symbol, one looks like it means “I’m so happy!” while the other looks like it could mean “I’m trying to pretend I don’t hate you!” Or perhaps just, “I need to eat more fiber!” Either way, that’s a significant difference.

In the GroupLens study, participants were shown pictures of different emoji, then asked to describe and define them. Test subjects also rated the emoji on a 10-point scale based on whether they perceived the emoji as positive or negative. On average, the sentiment rating for the emoji in the paragraph above varied by 2.04 points when it was sent across different platforms.

In fact, Apple users rated this particular emoji as “mildly negative,” while users of other platforms saw it as positive.

Trying to use emoji to communicate across cultures can be fraught with misunderstanding, as well. We like to think of pictures as a universal way to communicate. But in truth?  Even the way human facial expressions are interpreted varies according to culture.

Last year, One Hour Translations set teams of translators from 11 different languages to interpret 13 emoji sentences or expressions. They found some striking differences in interpretation. For example:

Most translators interpreted two emoji showing a sick face and a flexed arm to be related to sickness and getting better. But French-Canadians thought of this as ‘bicep implants’ and Arabic translators believed it to represent ‘my armpits are smelly’ – making it a bad choice to send when cancelling a date, for example. Most German translators saw the same symbols as the ‘strength of silence’, and a Chinese translator was particularly dramatic explaining, ‘I’ll not say anything otherwise I’ll be dead’.

Previous studies of emoticons, the text-based ancestors of emoji, revealed that different cultures used different styles of emoticon. For example, this 2013 paper [PDF] from the Association for the Advancement of Artificial Intelligence noted that:

Finally, different cultures sometimes use emoji for different reasons. According to the FreshTrax blog, Japanese speakers use more emoji than English speakers. Often, they are used in an attempt to be polite and diffuse potential negativity. However, the Japanese are also more lenient about emoji meaning. Sometimes, they are simply used for decoration.

Even if they have the same type of phone and share a common culture, people sometimes disagree about the meaning of an emoji. For example, lets go back to the GroupLens study. Even within the same platform, some people rated the

emoji as positive. Others saw it as negative.

Another study looked at how a group of Swedish teenagers used emoji in their messages. The teens also read a series of statements modified by different emoji. They were then asked to guess what each statement was trying to communicate. The result?

[S]ymbols, i.e. emoticons and emojis, are not interpreted in the same way by everyone: the interpretation, for example, of just one emoji ranges from sarcastic, humorous or friendly to sincere or hostile.

At this point, if you email, text, or use social media at all, it’s safe to assume you make use of emoji. However, beyond a simple “smiley face” or “frowny face,” it’s not safe to assume that the person you’re talking to will understand what you mean.

Even businesses are getting in on the emoji trend, especially as they use social media to engage customers and fans. For example, in 2015, Chevrolet announced the arrival of the 2016 Chevrolet Cruze via a press release written entirely in emoji.

To use emoji effectively, global businesses must consider their audience. Where are they from? What languages do they speak? How will this impact what they will take away from the symbols you include in your communication?