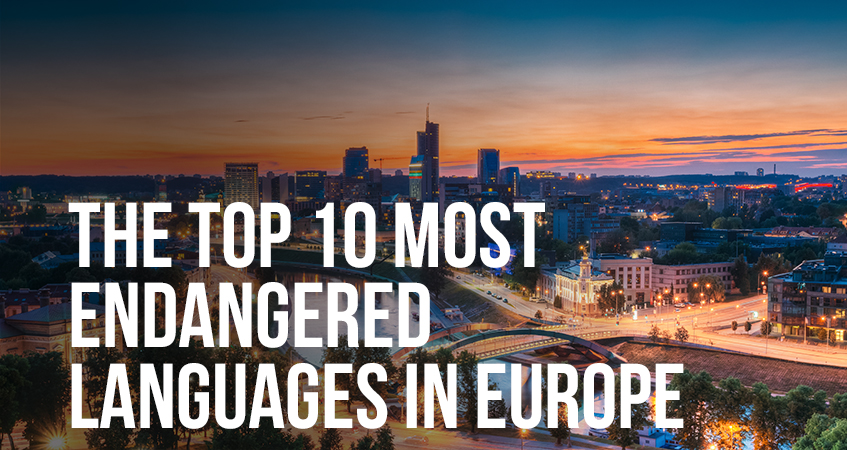 Every 14 days, another language falls silent forever. Linguists warn that in the next century, anywhere from 50-90% of all the languages in the world will be lost. While many of these languages are in developing countries, some are in Europe and even in the UK.

Before they disappear forever, let’s take a look at the 10 most endangered languages in Europe.

Cappadocian Greek evolved during the time of the Byzantine Empire. Like the rest of the empire, the people of Cappadocia, Turkey spoke Medieval Greek. However, in 1071, Byzantine forces lost the Battle of Mazikert, and the area around Cappadocia was taken over by Turkish speakers.

The Greek speakers kept their language, but it evolved separately from the rest of the Greek-speaking world and was heavily influenced by Turkish.

After the Cappadocian Greeks were moved back to Greece, most of them learned to speak standard Greek.

Fun fact: Scholars thought that the Cappadocian variant had died out in the 1960s. But in 2005,  researchers from Ghent University and the University of Patras found around 2,800 Greeks of Cappadocian descent who still spoke the language.

Tsakonian is the only surviving descendant of Doric Greek.  Although it is sometimes classified as a dialect of modern Greek, the two languages are mutually unintelligible.

Spoken by the Tsakonians, a formerly isolated group in the Peloponnese region of Greece, the language is a casualty of modernity and mass media. Although there are still anywhere from 200 to 1000 people who speak it, they are mostly elderly. The children aren’t speaking and so it is likely to become extinct within the next 100 years.

This tiny Germanic language is spoken only in the town of Wilamowice in Poland. The town was originally formed by settlers from Flanders, Friesland, Holland and Scotland in the 1300s. The descendants of the settlers continued speaking Wymysorys until after World War II when communist authorities began to suppress it due to its Germanic influence.

Currently, Pite Sami is spoken by less than 50 people, all of whom live on the Swedish side of the Swedish-Norwegian border, near the Pite River.

Country: Traditionally Slovenia, but most speakers now live in the US.

Gottscheerish is the language of the Gottscheers, German-speaking settlers who migrated to what is now part of Slovenia during the 1300s.

Gottscheerish is closely related to other Bavarian dialects and is unintelligible with modern German. It was traditionally an oral language, as the Gottscheers wrote in Standard German.

During World War II, many of the Gottscheers were resettled. Many others left after the war, and their language was forbidden by the new Yugoslavian government.

Fun Fact: Most of the remaining speakers of Gottscheerish live in Queens, New York.

Ume Sami is the traditional language of Sami living along the Ume River in Sweden and Norway (number 2 on the map to the right.) It is now spoken by only a handful of elderly Sami in Sweden. It was the first Sami language to be written down, but it never developed an official written form.

Hértevin is an Eastern Aramaic language primarily spoken by Chaldean Catholics in southeastern Turkey. Most speakers have moved to the West and are isolated from each other, so it is unlikely to survive.

Karaim is a Hebrew-influenced Turkic language traditionally spoken by some Crimean Karaites, a Jewish group from Lithuania, Poland, Crimea and Galicia.

There’s no consensus on where the Karaites came from. Some scholars believe they left Constantinople during the Byzantine Empire. Others believe they descend from Turkic tribes who converted to Judaism. And one scholar even claims that they are descendants of Jews who left Israel around 720 BCE.

Whatever their origin, only about 80 native speakers of Karaim remain. Most of them live in the town of Trakai in Lithuania. Karaim is a recognized minority language in Poland and Ukraine. That said, if it survives, it will be in Trakai. Not only does the town have the largest community of Karaim speakers, the language is seen as part of the atmosphere that brings tourists to visit Trakai Island Castle.

Cornish is a Celtic language traditionally spoken in Cornwall. There were about 39,000 Cornish speakers in the 13th century. However, the language came under increasing pressure from English and it was declared extinct in the 19th century.

But the story of the Cornish language doesn’t end there. In 1904, Cornish scholars began a successful effort to revive it. In 2010, Unesco changed its classification from “Extinct” to “Critically endangered.”

Today, both the UK government and the  European Charter for Regional or Minority Languages recognize Cornish as a minority language. The language is taught in Cornish schools and the number of people who can speak it is slowly increasing. It’s a hard-won, precarious but nonetheless inspiring victory.

Number of Speakers: About 100

Manx is a Celtic language spoken on the Isle of Man. Like Cornish, it has narrowly escaped extinction. The last native Manx speaker passed away in 1974.  By that time, however, a revival effort was already in force. So unlike Cornish, Manx was never truly extinct. That didn’t stop Unesco from declaring it extinct in 2009, but they’ve since amended their classification to “critically endangered.”

Tags: Endangered Languages
Previous Post President Trump, In Translation
Next Post 9 Language and Translation Stories You May Have Missed

5 thoughts on “The Top 10 Most Endangered Languages in Europe”