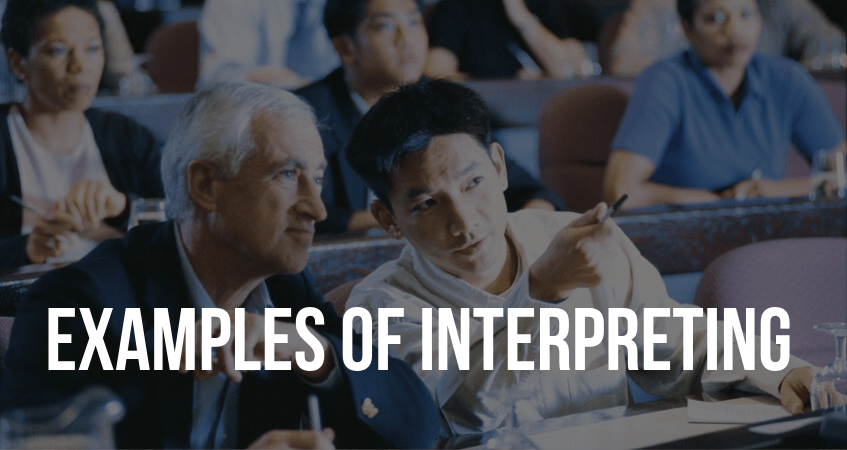 Interpreting – when carried out correctly – can sometimes mean the difference between life and death. Even just one word translated slightly inaccurately can lead to a series of disastrous events.

To demonstrate just how important this skill is, we’ve collated both some of the worst horror stories and some of the best examples of interpreting. Starting with a story that illustrates just how serious getting it wrong can be.

A Case of Poor Interpreting Leads to an Avoidable Paralysis

Perhaps the famous case of bad interpreting was that of 18-year-old Willie Ramirez back in 1980. He was brought into Floridian hospital in a coma after ingesting something that caused a reaction.

There was no certified medical interpreter on hand and his family used the word “intoxicado” to describe his condition. In Spanish, this word only indicates that the patient has ingested something. It could mean food, drugs, or anything else that made him fall seriously ill. In this particular case, the family had believed that it was something he had eaten that has caused his condition.

The unqualified interpreter on-site incorrectly translated this word to “intoxicated”, leading doctors to treat the problem as an overdose. After several days of further tests, it was revealed that the issue was a bleed on the brain. But by then it was too late. Ramirez had suffered permanent damage and subsequently became quadriplegic.

The human tragedy of this case illustrates the importance of translation. One incorrectly translated word cost Mr Ramirez the use of his limbs for the rest of his life. The hospital in question also had to pay out an eye-watering $71 million dollars to settle a malpractice lawsuit concerning the mistranslation and subsequent misdiagnosis.

Legal translation services are coming under increasing scrutiny in the UK after there have been several recent high-profile instances of poor work carried out by interpreters.

Perhaps none more so than a recent rape trial which took place in Northern Ireland. Two Lithuanian men were charged with the offences of rape, sexual assault, false imprisonment, causing actual bodily harm and assault.

However, after just one day of the trial, the judge ordered it to be abandoned after concerns were raised about the standard of translation surrounding the alleged victim’s evidence. It quickly became apparent that the interpreter in question was unregistered and unfit to carry out such critical work.

The judge ruled that the trial had been “irreparably compromised” and abandoned proceedings at the end of the first day. Despite the trial only lasting a matter of hours, the cost to the taxpayer was estimated to be north of £30,000.

Of course, interpreting also extends to sign language as well as oral and written translation. One case that hit the headlines across the globe was that of Thamsanqa Jantjie, who was the designated sign language interpreter for Nelson Mandela’s funeral.

As huge names such as Barack Obama graced the stage to pay tribute to South Africa’s first black president, Jantjie was accused of gesticulating nonsense and literally “making up signs as he went along”.

The incident caused widespread embarrassment for the South African government for utilising his services and left mourners incensed that one of their most-venerated leaders had been treated in this manner.

But luckily for every interpreting horror show, there are some good news stories too. In fact, in many cases, good interpreting has saved lives.

One example tells the story of a little Mexican girl – who can’t be named for legal reasons – who was born with a urinary tract infection.

After completing a couple of life-saving surgeries, the doctors conducted several tests and sent her home whilst they waited for the results. After the results came through, the doctors immediately telephoned the girl’s home address to request that she came in for follow-up check-ups.

However, the girl’s elder sibling answered the phone and didn’t understand the importance of the call, not informing the parents of the situation. The result was the girl did not come in for her check-up.

The doctors immediately enlisted the help of a qualified interpreter and phoned again. The parents brought their daughter in that afternoon, and with the help of the interpreter were able to understand that this was indeed a life or death situation.

The little girl remained in hospital receiving treatment for over a week and to this day she still receives medical care for her condition. Without accurate interpreting there’s a very real chance that she would not still be alive.

Another recent interpreting good news story was that of Rachel Shenton who won the Oscar for Best Live Action Short Film named The Silent Child.

The film centres around a deaf girl who struggles to get by without sign language. In keeping with the subject matter of the film, Shenton impressively gave her acceptance speech both verbally and self-interpreted for the deaf community using BSL.

She used her speech to highlight the difficulties that deaf individuals face on a daily basis, particularly when they are born to parents who both have the ability to hear. Placing an emphasis on the importance sign language has within both the deaf and wider community.

Get Your Interpreting Right with Help from The Experts

Hopefully, this article has demonstrated the harm poor interpreting can cause as well as the positive impact successful cases of interpretation can have.

Here at K International, we have over 30 years of providing only the highest quality of qualified interpreters. We understand that no two scenarios are the same, and that’s why we take the time to listen to our client’s needs before providing one of our many different types of interpreting services.

Whether you need on-site interpreting, telephone interpreting, or sign language interpreting, we have the fully-qualified personnel to accurately translate your message. To speak to us about your interpreting needs simply get in touch, and a member of our team will get back to you as soon as possible to discuss your requirements.

This article will help you learn more about what interpreters do and why they’re important, better understand your options and choose an interpreting service that will help you achieve your organisational goals.