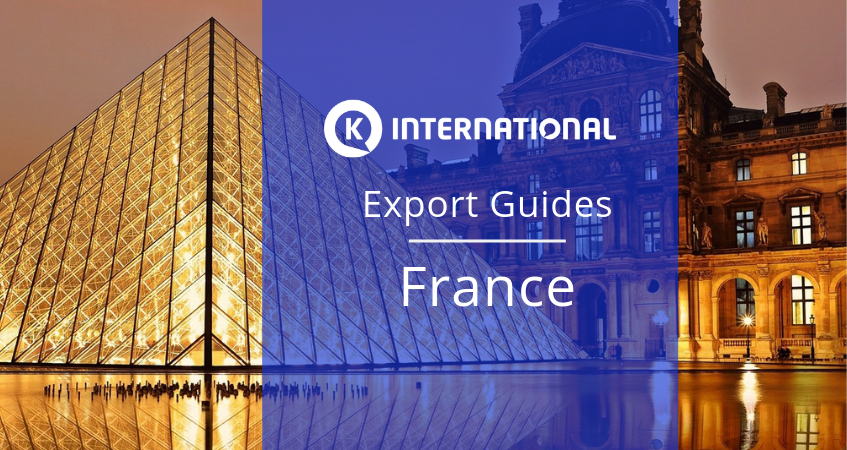 France is a country that embraces commerce, offering a dynamic, professional business environment in which companies have every opportunity to thrive. As a leading economic powerhouse, France is a member of the G7 (which was formerly the G8), as well as the OECD, European Union and World Trade Organization.

France’s proximity to the UK (the Strait of Dover is just 20.7 miles at its narrowest point) means that the two countries have long-standing business ties. Many UK companies look to France to begin their international trading ventures.

This France business culture guide has been written to support UK-based exporters with key details about exporting their goods and services to France.

France is the second most populous country in the EU. It is home to nearly 67 million inhabitants, according to Eurostat. French is the only official language of France and is the preferred language for both personal and professional interactions. Several regional languages are spoken in addition to French, but usually as a second language rather than a first language. These include Alsatian (a German dialect spoken by 1.4% of the population), Breton (spoken by 0.6%), Langues d’Oïl (1.3%) and Occitan (1.3%). Maghrebi Arabic and Portuguese are also spoken, by 2.1% and 1.3% of the population respectively.

89.4% of France’s population is French, while a further 4.4% are French by acquisition. The remainder of the population is made up of foreigners/immigrants.

According to the Eurobarometer, some 39% of French people speak English. The proportion tends to be higher in big cities and popular tourist areas. However, as a rule, the French prefer to communicate in their own language – just because an individual speaks English, doesn’t mean he’s prepared to do business in that language. As such, employing a robust French business translation service as part of your overall strategy can be vital to making a success of exporting your goods to France.

France is the world’s 25th most connected country in terms of the percentage of its population that has access to the internet. In total, 84.69% of French people are internet users. The widespread embracing of technology across the country means that France offers an excellent, contemporary business environment in terms of the technology available and its citizens’ understanding of digital matters.

Venture capital investment in France rocketed between 2015 and 2016, growing to £2 billion in 2016 according to figures from Atomico. That positions France well ahead of Germany, which received £1.6 billion of venture capital investment over the same period. Foreign funding and talent have flocked to Paris in particular, with the French capital building a strong reputation as a mature location for start-ups and tech firms. Paris is home to Station F, the world’s biggest start-up campus. The site is home to 26 international start-up programs, while the French Tech Visa makes it easy for international tech talent to fast-track the process of opening operations in France.

France’s economy blends private enterprises with state enterprises. France is the world’s seventh wealthiest economy when ranked by wealth per adult, with an average wealth per adult of US$244,365. France is also the sixth largest economy in the world by GDP, with a GDP of US$2,463,222 million, according to the International Monetary Fund. It is the second largest economy in the EU by purchasing power parity and is home to 31 Fortune Global 500 companies (which is more than are based in the UK or in Germany).

France introduced the euro as its currency in 1999, with the French franc phased out entirely by 2002.

In terms of commercial services, France was the world’s fifth largest exporter in 2015 and its fourth-largest importer, according to the World Trade Organization. According to the World Integrated Trade Solution service from the World Bank, French imports total $560,554,862.70 thousand per year, with exports totalling $488,885,072.44 thousand.

Agriculture is an important part of the economy, thanks to France’s fertile land. France is responsible for 20% of the EU’s agricultural production. It is the third largest exporter of agricultural products in the world and the largest in the EU. Wheat, poultry, dairy, beef, pork, wine and processed foods are all key export products. Food packaging translation services are, therefore, extremely important in France.

Tourism is also key to the French economy and France is the world’s most visited country, attracting well over 80 million holidaymakers per year. Another important sector is energy, with France producing 22% of the EU’s electricity. The transport, science and technology sectors also rank highly in terms of their importance to the French economy.

French people are proud of their culture and history and this national pride is often reflected in the country’s business environment. Mutual trust and understanding are very important during business interactions, as is appropriate conduct. Rules and regulations play an important role – by and large, the French are not keen on ambiguity or too much flexibility when it comes to business relationships. Regulatory/compliance translation is, therefore, a key service for companies looking to export to French markets.

Localisation support can be helpful when dealing with French companies, along with an awareness of certain customs. It is important to arrive on time for meetings in France, though it’s acceptable for other attendees to be 10-15 minutes late. Adhering to deadlines has become increasingly important in France in recent years, so companies must make sure that they meet their commitments on time.

Hierarchy is important within French companies, so it’s best to liaise with the boss in order to get final decisions made. However, working with officials at other levels is also important for ensuring efficiency.

The French like to balance polite relationship building with business practices, so a small amount of personal chitchat often precedes meetings. However, personal and professional relationships are usually kept separate outside of the working environment. Instead, business lunches are used to foster relationships.

As meetings will usually be conducted in French, a French translation service can play a vital role for UK exporters looking to tap into French consumer markets. Participants who don’t speak French would do well to employ their translation provider to supply them with some background linguistic training  – such efforts will stand them in good stead during professional interactions.

Meetings in France begin and end with a formal handshake. Participants should be addressed by their title and surname unless they specifically advise otherwise. Meetings and other business interactions are formal in their nature and should not be rushed. This includes the decision-making process. Meetings are often used for sharing information, with decisions following at a later date, once sufficient thinking time has been allowed.

The Department for International Trade team in France is available to support UK businesses looking to export to French markets. France also hosts a British Embassy in Paris and trade offices in both Lyon and Bordeaux, which include specialist trade experts covering cross-border business interactions.

Companies looking to set up subsidiary arms in France need to register with the local Chamber of Commerce and set up a French bank account. Businesses that sell goods online to French markets also need to register for VAT with the French tax authorities once turnover reaches a particular threshold (€35,000 at the time of writing).

The licensing of goods and services in France is possible. Specialist contract translation support is highly recommended for those undertaking this activity. Brand localisation is also important in this respect. Licenses may also be required in order to export goods to France, in which case legal translation services should be used.

If your business is planning to export to France, K International can help by providing professional business and legal translation services. Contact us for further details.