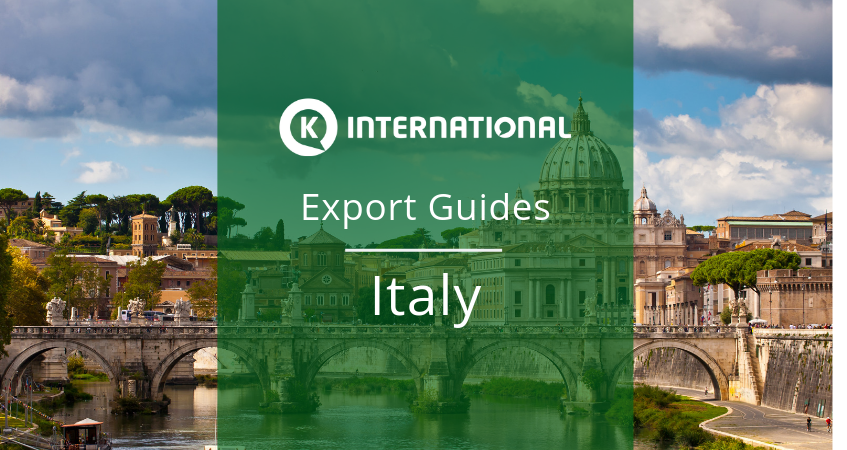 Italy imports a wealth of resources and transforms them into finished products. These are then sold both domestically and internationally. This presents some excellent opportunities for UK exporters, with the Italian government offering investment incentives at a local, regional and national level.

With a flight time of under 2.5 hours from London to Rome, Italy provides a close, convenient location for UK businesses looking to expand their international operations. It is also an attractive country to visit, with The Economist reporting that Italy enjoys the eighth highest standard of living in the world.

Italy is home to 34 living spoken languages, most of which have evolved from Vulgar Latin. With a predominantly Roman Catholic population, Latin also remains an important language in Italy and you can even use an ATM in Latin in Vatican City. The country’s main, official language is Italian.

As well as indigenous languages, a significant proportion of Italy’s 60 million residents also speak foreign languages: 34% speak English, 16% speak French and 11% speak Spanish. The high volume of English language learning in Italy makes it easier for UK companies to undertake business there. However, the main business language is Italian, so translation services may well be necessary for business letters, emails, meetings and more. Legal translation services are certainly essential when it comes to signing contracts and other forms of agreements.

Italy ranks 60th in the world for the percentage of its population that has access to the internet, at just 65.57% of people. The country has a clear north/south divide, with the north offering a significantly more industrialised environment with superior infrastructure in comparison to the south.

Italy lags behind many European countries in terms of its upload and download speeds. In fact, it’s known for having the lowest levels of ultra-fast broadband in the EU. UK companies looking to open offices in Italy as part of their export venture are advised to bear this in mind.

The Italian economy is the third largest in the Eurozone. In terms of nominal GDP, it is the eighth largest economy in the world, according to the International Monetary Fund. When considered by total wealth per adult, it ranks 10th in the world, with an average wealth of US$202,288 per adult.

Italy uses the euro as its currency, which it has done since the currency was introduced in 1999. Prior to that, Italy used the lira, which was phased out between 1999 and 2002.

Italy is a key centre for motor vehicle, tyre and home appliance manufacturing. It also has extensive energy and petrochemicals sectors. Other important sectors are as varied as defence, space, firearms and fashion. The food and beverages sector is also very important to the Italian economy, thanks in large part to the country’s production of olive oil and wine.

For companies exporting their wares from the UK to Italy, the varied nature of the marketplace means that a range of business translation services come in handy. Localisation support services also serve UK exporters well in helping them to shape the way they present information about their products to Italian audiences.

There is a pervasive stereotype of Italian workers as being laid back and relaxed. Thus many UK companies are surprised to encounter the dynamism and entrepreneurial drive of the modern Italian workforce. Italy is home to a highly skilled workforce, particularly in the northern half of the country.

Professionalism and courtesy are highly valued by businesspeople in Italy, so be sure to be considerate in your dealings with them. Conversely, punctuality is of limited importance, so don’t be offended if your Italian counterparts arrive late for meetings or if the start of a project is delayed. It may help to view deadlines more as aspirational guidelines rather than firm dates that will be stuck to. If a deadline absolutely has to be met, this should be made explicitly clear!

Italian businesspeople generally have a great sense of humour and, as such, can be an enjoyable workforce to do business with. Laughing and joking with your Italian peers is a natural part of the business environment and can make for very pleasant working relationships. Despite this, certain subjects are sensitive, so avoid talking about the mafia, politics, private income or private family issues.

Italy is known for the expressive nature of its people, so those planning to do business there would do well to learn a few common gestures. For example, grouping your fingers tips together with your thumb while waving your hand back and forth is a common way of asking “what is it?” or “what do you want?”.

Business attire in Italy should always be stylish and tasteful – as one might expect from one of the world’s most influential fashion powerhouses. Simple elegance is the key. While some meetings and sectors will allow for less formal attire, even casual clothing in Italy tends to be chic and stylish, so dress well for every occasion.

Italy provides a convenient gateway to Mediterranean and Middle East markets, meaning that many companies export to Italy with a view on markets further afield, as well as the domestic Italian market. Italy’s manufacturing prowess makes it a good partner for many UK businesses, with Italian translation playing a key role in facilitating cross-cultural business relationships between the two countries.

UK companies looking to export to Italy are well supported by the Department for International Trade and UK Export Finance. It’s worth noting that payment terms in Italy are longer than they are in the UK, with an average of 80 days for business to business payments. UK companies should bear this in mind when preparing their financial projections. It is easiest to sell to Italy through an agent or distributor. The Department for International Trade can provide further advice on this.

If you would like to start exporting to Italy, K International can help. Our business translation services include everything from food packaging translation to regulatory and compliance translation. Contact us for further details.