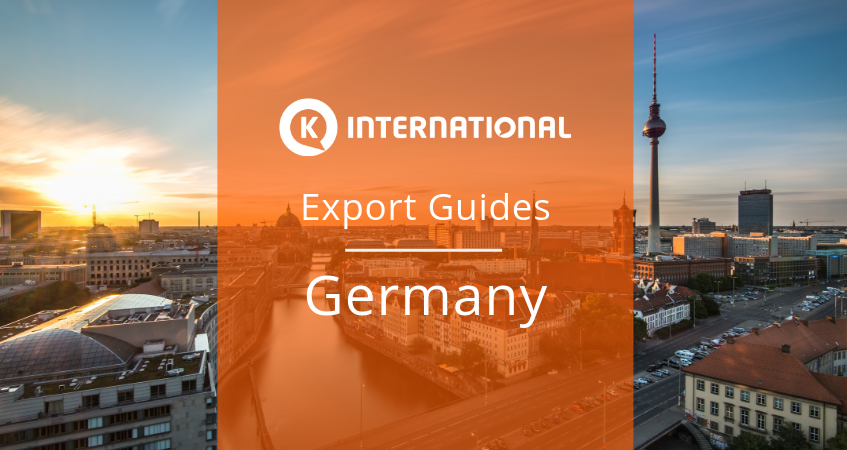 German businesses have a reputation for innovation and productivity. They are also known for supporting worker progression from the shop floor to senior management, to ensure that those in charge of the company know the business inside out. Germany has used this approach to build financial strength that sees it exporting goods around the world. It is also an important importer of goods from the UK.

This business culture guide is designed to provide UK-based exporters with the facts and figures they need in order to get to grips with this key export market.

Germany is the most populous country in the EU, with 82 million inhabitants. The official language is German, but some 50% of residents are also able to converse in the English language. A number of native minority languages are recognised, including Danish, Low German, Sorbian, Romany, North Frisian and Saterland Frisian. Turkish, Kurdish, Russian, Polish and the Balkan languages are also commonly used among immigrant communities in Germany. Immigrants make up 21% of the country’s population.

German is the most commonly used language for conducting business in Germany and should be used as the starting point with any new contacts. It is possible that discussions may switch to English at some point in the process, should that be easier for the majority of parties concerned.

Some 87.59% of Germans have access to the internet, making it the world’s 21st most connected country. This provides for a thriving e-commerce environment, with many tech firms choosing Germany as their base. Berlin, in particular, has positioned itself successfully as a tech and start-up hub in recent years.

According to Credit Suisse, Germany is the world’s fifth richest country by total wealth. Its wealth in 2016 was US$12,419 billion. That equates to a wealth per adult of $185,175 and a median wealth per adult of $42,833. Within Europe, only the UK has a greater total wealth than Germany (at $14,150 billion). When measured by GDP, Germany is the fourth largest economy in the world.

The German economy is dominated by the service sector, which accounts for some 71% of GDP. Industry accounts for 28%, while the remaining 1% comes from agriculture. The country’s unemployment rate stood at 3.7% as at August 2017. A total of 28 Fortune Global 500 companies have their headquarters in Germany.

Germany has used the euro as its currency since 1 January 2002, when it replaced the Deutsche Mark.

Germany is the third largest exporter of goods in the world. It offers an innovative business environment with low levels of corruption and a highly skilled labour force. According to the World Integrated Trade Solution service from the World Bank, German imports total $1,057,616,385.86 thousand per year, while exports total $1,328,549,134.47 thousand. Imports of goods and services account for 39.21% of GDP, while exports account for 46.78%.

The business translation services required to be part of this highly lucrative market cover a wide range of disciplines. Companies looking to attract German importers to their goods and services can require anything from packaging and brand localisation, to support with regulatory compliance, to the translation of business contracts.

Germans have a reputation for efficiency and innovation and this can certainly be seen in the country’s business culture. Punctuality, order and industriousness are key to success in Germany and are expected as standard from those looking to succeed in exporting their wares to German markets. Sticking to agreed timescales and milestones is essential.

In light of these cultural particulars, the value of localisation support in developing and maintaining business relationships in Germany should not be underestimated. German translation and localisation services can assist businesses in ensuring that they take the right tone in each and every interaction, allowing for cultural quirks in order to maximise the success of the business relationship.

Business relationships in Germany are highly professional – private lives are largely kept separate from corporate interactions. Business dealings are formal and direct, with emotion usually removed from the equation. Hierarchical structures are highly respected and those in authority are deferred to for their greater skills and experience.

There’s a great deal of written communication involved in doing business in Germany. Agreements are recorded in writing and those records tend to be formal in their nature, even when they are conducted by email. Contacts should be addressed by their title and surname, even once well-established – first names are for family members and good friends. Formal language (including “Sie” for “you”) is appropriate for everything from emails to contracts and legal translation services are essential for any paperwork being agreed between international partners.

For face to face meetings, greetings are formal – handshaking is the norm both when greeting a business contact and when departing. That applies to every meeting, even when businesspeople have been working together for quite some time. Support with facilitating meetings in German is often a good idea for those companies who are new to this market.

Back in the 1990s and 2000s, many British businesses did not fare well in Germany. Marks & Spencer, for example, first tried to crack the German market in 1996, but Germans were not keen to embrace the English sense of style. The company also encountered problems with offering the same extensive chilled food range that had earned it such a reputation in England, due to issues with the fresh supply chain. After opening 38 stores in its effort to conquer the German market, M&S finally pulled its German operation in 2001.

Many modern businesses have learned from M&S’ example. Support with supply chain communication and logistic information are commonly sought from translation companies with linguistic and cultural expertise in the Germany market.

Interestingly, recent years have seen the German market become more receptive to British brands. Whitbread (owner of Premier Inn and Costa Coffee, amongst others), Kingfisher and ASOS are all becoming established in Germany. Companies known for providing value-for-money for their customers are doing particularly well, despite the lack of success of higher end UK enterprises in tapping into German audiences.

If your company is looking to do business in Germany and requires support with business or legal translation, K International can help. Contact us today or visit the link below for further information.