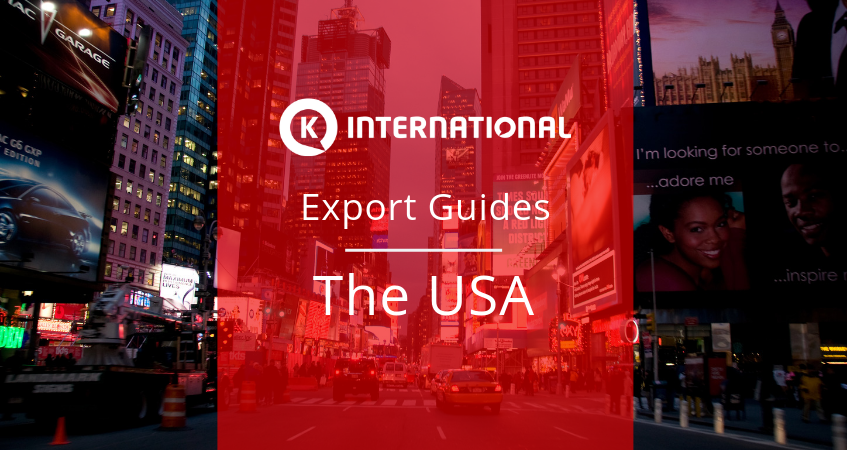 The United States of America (USA) is a welcoming business environment for UK companies. Its highly developed economy offers a range of economic opportunities for foreign companies. For UK businesses, the USA presents fewer linguistic difficulties than trading in many other countries (due to both nations speaking English), but localisation support is often essential in order for companies to appeal to US consumers.

This business culture guide has been written to help UK exporters in their business ventures in the US.

At least 80% of people (237.8 million citizens) in the USA speak English, while a further 12.4% (40.5 million people) speak Spanish. A range of other languages are also spoken in the USA, including Chinese (with Mandarin and Cantonese speakers combined totalling 3.4 million people), Tagalog (1.7 million), Vietnamese (1.5 million), Arabic (1.2 million) and French (1.2 million).

The most commonly used language for business purposes is English. UK companies exporting to the USA, therefore, don’t usually need professional translation services – although transcreation services can be extremely useful in retargeting information to American audiences.

The exception to this is for those doing business with Spanish-speaking companies, in which case professional Spanish translation services may well be essential. Spanish is the fastest-growing language in the USA and in some areas is spoken as the primary language.

The USA is home to the third highest number of internet users in the world, with more than 239 million people online. That accounts for some 74.55% of the population, making the USA the 40th most connected country globally.

For home internet users, a lack of competition means that around 1/3 of American households have no choice over who provides their broadband, or else have no broadband provider at all. For internet speeds, the country ranks 16th globally. Due to the adoption of micro-trenching (a cheaper and faster way of laying cables) in recent years, large cities are now able to offer superior connectivity to businesses and residents than they previously could.

The USA is the world’s largest economy by GDP, based on figures from the United Nations, World Bank and International Monetary Fund. It has a nominal GDP of US$18,624,450 million. As such, American citizens enjoy the world’s highest rate of wealth per adult, at an average of $344,692.

The American economy is extremely diverse. It is the second largest in the world by purchasing power parity. The country enjoys abundant natural resources, with a value of $45 trillion in 2016 and is the world’s third-largest producer of natural gas and oil. The US also has a powerful manufacturing presence, producing a fifth of the total global manufacturing output.

As well as goods, services are also a key component of the American economy. 134 of the world’s largest 500 companies have their headquarters in the USA, while the country’s total trade in 2016 amounted to $4.92 trillion. The country had an unemployment rate of 4.4% in August 2017.

The USA uses the dollar as its currency. The dollar is the world’s most-used currency for international transactions.

The USA’s most important trading partners include Canada, Mexico, China, Japan, the UK, Germany, South Korea and the Netherlands. Its sheer size, as well as its abundance of natural resources, has made it one of the world’s key trading posts for well over a century.

The USA is ranked as the 7th easiest country to do business with by the World Bank. It is the UK’s top export destination. The top five industries importing into the US include:

Localisation support when exporting these products is essential. The USA is an extremely litigious country, so a good understanding of its relevant laws, product requirements and even cultural norms is important for a company to succeed there.

Business culture guide for the USA

US citizens work a 40-hour week as standard, though many work longer hours than this. Hard work is a core component of the American Dream ideology, along with merit-based success. Individual efforts are rewarded, which can lead to some very competitive working environments. American workers value professionalism and competence highly. Accountability is also important.

To a UK audience, American business culture can sometimes seem rather direct. Businesspeople are keen to get to the point and don’t shy away from tackling any issues swiftly and openly. This can include (constructive) criticism delivered in front of others, which is not considered rude in the USA, but rather a helpful way to move issues forward.

Punctuality is essential when doing business with American companies. To be late is considered disrespectful and missing a deadline is out of the question. Working hard and working fast are of equal importance – hence the direct manner and emphasis on sticking to schedules.

American business contacts should be addressed by their title and surname until you are invited to address them otherwise. Meetings with them should begin with a handshake and direct eye contact, followed by small-talk to put participants at their ease before the main business of the meeting begins. The dress code for meetings tends to be conservative – if in doubt, opt for a suit and tie or dress suit.

The UK and USA have business ties dating back to the early 1600s. Today, the two countries have a strong trading relationship, with many UK firms exporting their goods to the USA and vice versa. Much has been made (by politicians and trade officials alike) of the ‘special relationship’ between the UK and America.

While the American market is generally receptive to UK brands, the localisation of UK English into US English, along with the conversion of marketing information for US audiences through transcreation plays a key role in enabling UK companies to succeed ‘across the pond.’

If your company is planning to export to the USA, K International can help. Contact us today for further information on our transcreation and localisation services for business customers.