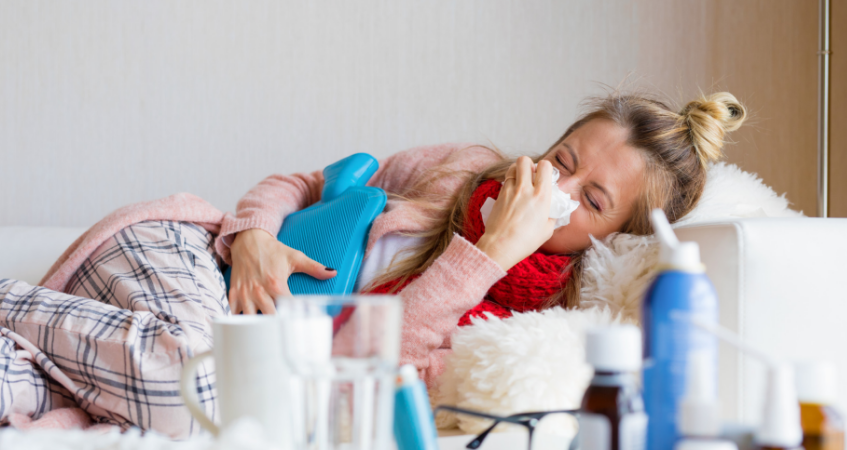 It’s winter in the Northern hemisphere, and that can only mean one thing: you and everyone you know are either sick now,  just getting over being sick, or about to be sick. Maybe you have “a cold,” or a “frog in your throat,” or you’re just feeling a little “under the weather.” But have you ever thought about how strange those phrases might sound to someone who didn’t grow up hearing them?

And have you ever wondered how people describe being sick in other languages? Take a look at these metaphors and expressions for sickness from around the world.

Expressions for Sickness in English

Feeling “under the weather?”  This expression has nothing to do with the weather forecast.  In fact, it’s an old nautical term that made its way into common use. During long voyages, sick sailors and passengers would be sent below deck- literally “under the weather” – to recover.

Do you have “a frog in your throat?”  This phrase actually comes to us from 19th-century American English. It spread across the pond when an American company began selling their popular “Frog in Your Throat” cough lozenges in England.

Fun fact: No frogs were harmed in the making of “Frog in your Throat” cough lozenges. However, in the 17th century, holding a live frog in your mouth until the frog died was believed to cure a sore throat.

Perhaps a bout with the flu has left you “sick as a dog?” This phrase dates back to the 18th century and is probably derived from the familiar canine habit of eating random objects and vomiting them back up.

Oh, did that last bit leave you feeling a little “green around the gills?”  Where did that come from, anyway? People don’t have gills! Well, not anymore. However, in earlier centuries, English speakers sometimes referred to the lower part of the face as the “gills.”

Expressions for Sickness in French

In French, “Être crevé” means “to be flat, to be dead.”  An apt way to describe the utter and complete fatigue that comes with being sick.

Some sicknesses are more easily avoidable than others.  “Avoir la gueule de bois” which means “to have the wooden face” is one way to describe having a hangover.

And if you thought having a frog in your throat was bad, “Avoir un chat dans la gorge” is French for having “a cat in the throat” instead.

Feeling faint?  “Voir 36 chandelles” means “to see 36 candles,” which is the French equivalent of “seeing stars.” Better sit down before you “fall in the apples” (tomber dans les pommes ), which means “to faint or  pass out.”

Expressions for Sickness in Italian

If you’ve managed to avoid catching the latest virus going around, you might say you’re “sano come un pesce,” or “healthy as a fish.” This is the Italian equivalent to “healthy as a horse.” That’s surprising considering how common it is to find them floating belly-up in the aquarium.

Instead of having is a frog in your throat, in Italian, you’d have a toad: “Avere un rospo in gola.” I know frogs and toads are similar. But for some reason, I find the thought of having a toad in my throat infinitely more horrifying.  Those warts . . . yecch!

un brutta cera.” That literally translates to “a bad wax.”

Expressions for Sickness in German

In German, they have a word for the seasonal depression that helped inspire TS Eliot’s The Waste Land.  Frühjahrsmüdigkeit  means “spring fatigue” or “early year tiredness,” and refers to “state of low energy and weariness, experienced by many people in springtime.”

No matter what time of year it is, if you feel like death warmed over, you might say to German-speaking friends “Ich fühle mich wie der Tod auf Latschen.” That translates to “I feel like death on slippers /worn out shoes.”

Amusingly, “Ich bin fix und fertig” literally translates to “I’m quick and ready.” However, it usually means the opposite: “I’m wiped out!”

Expressions for Sickness in Spanish

In Spanish, instead of being “healthy as a horse,” they say “Estar más sano que una pera.” That translates to “as healthy as a pear.”

But if you’re feeling less than healthy, in some parts of Spain you might say “Estoy pachucho”. That means “I’m feeling overripe” or “seedy.” It’s equivalent to the English “I’m under the weather”

And what if you’ve got a nasty cough?  “Tengo un pollo en la garganta” means “I have a chicken in my throat.” It’s a fitting description for that feeling when you need to cough up a lot of phlegm.

Expressions for Sickness in Czech

In the Czech Republic, you wouldn’t have a “frog in your throat.” Instead, you’d have  a “knedlík v krku.” Literally, that’s “a dumpling in the throat,” which is probably the least unpleasant-sounding of these metaphors.

Expressions for Sickness in Greek

The Greek language wins the prize for “best description of a sore throat”. Καταπίνω ξυράφια» [kata’pino ksi’rafça]  means “to swallow up razor blades.” If you’ve ever had strep throat or tonsillitis, you know the feeling!

Idiomatic expressions like these are one of the reasons that your business content needs a knowledgeable, professional translation team. Can you imagine an advertisement in English talking about someone having “a chicken in their throat?”

If you’re in the market for translation services, our team of expert linguists is happy to make your original message comes through clearly and persuasively in the target language and doesn’t leave your audience scratching their heads.

Can you think of any more colorful expressions to describe being sick? Share them below!