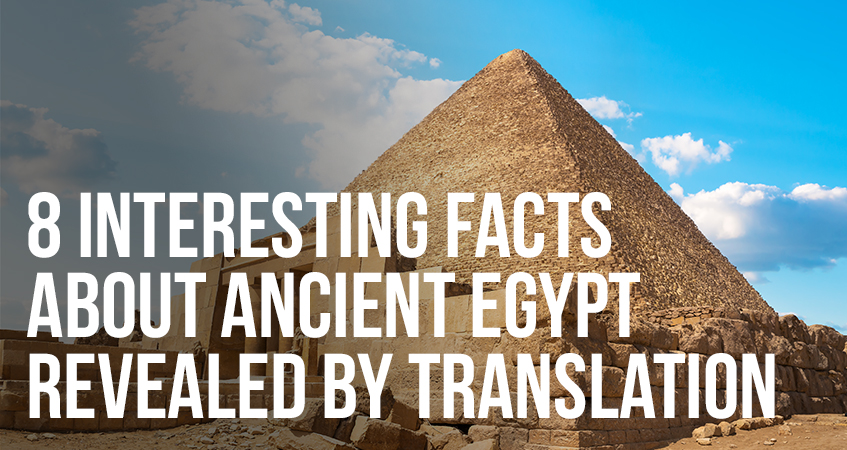 Translation helps us understand people from other cultures, even if they vanished thousands of years ago. For example, consider the ancient Egyptians. Until the discovery of the Rosetta Stone allowed ancient Egyptian writing to be translated in 1820, all that we knew of them came from the writings of historians from other cultures. However, these accounts were often inaccurate.

Fortunately for us, writing was a vital part of ancient Egyptian culture. Once scholars were able to read what they left behind, they learned a surprising amount about how the ancient Egyptians lived.

Here are 8 interesting facts about ancient Egypt we learned from translation:

Writing was an essential skill in ancient Egyptian society.  To keep the empire running smoothly, they needed to write everything down, from the sacred (funeral texts, magic spells) to the mundane (contracts, legal documents). And yet, only about 1% of the population was literate.

Because of this, scribes became a privileged intellectual class. Their services were always in high demand. Sometimes, scribes even led large building and infrastructure projects. To quote one ancient text,  The Satire of the Trades,

“See, there is no office free from supervisors, except the scribe’s. He is the supervisor!”

Ancient Egypt Had Doctors, Including Specialists …

Medicine was another important profession in ancient Egypt. Physicians went through fairly extensive training. and could perform minor surgeries successfully. Ancient Egypt even had specialists, including  ophthalmologists, gastroenterologists, proctologists, and dentists.

In fact, the ancient Egyptian word for “proctologist” translates to “shepherd of the anus.”

But They Still Used Animal Dung as Medicine

Unfortunately, since the ancient Egyptians revered the scarab beetle, they sometimes attributed healing powers to its favorite food: animal dung. Sounds like a load of crap, but there may have been something to it.

“According to 1500 B.C.’s Ebers Papyrus, donkey, dog, gazelle and fly dung were all celebrated for their healing properties and their ability to ward off bad spirits. While these repugnant remedies may have occasionally led to tetanus and other infections, they probably weren’t entirely ineffective—research shows the microflora found in some types of animal dung contain antibiotic substances.”

Still, I’ll take a bandage with some Neosporin any day!

The World’s First Recorded Female Doctor Was from Ancient Egypt

Merit-Ptah was the first recorded female doctor in history.  She lived around 2700 BCE. We know almost nothing about her, but her image lives on today on a tomb in Saqqara. Her son, the High Priest, carved an inscription underneath her picture. It says “Chief Physician.”

The Recipe for the World’s First Toothpaste

The oldest known recipe for toothpaste comes from an ancient sheet of Egyptian papyrus. The formula for “white and perfect teeth” includes rock salt, mint, dried iris flower, and pepper.

Interestingly, according to the Telegraph, scientists  recently discovered that iris powder is effective against gum disease. Or perhaps they rediscovered it. The ancient Egyptians probably knew all along!

Think the Prenup is a Modern Invention? Think Again!

Ancient Egyptian marriage contracts often included a prenup to protect the wife in case of divorce. Woman were almost the equals of their husbands in ancient Egyptian society. They were supposed to be somewhat deferential to men, and they were often the primary caregivers for children and the elderly. But women were certainly not considered property. They had legal rights just like men did and were able to enforce those rights in a divorce.

Prenups were a common feature in ancient Egyptian marriages. They ensured that the woman would be able to retain the value of the property she brought into the marriage, and they often assured her of spousal support in the event of a divorce.

One ancient Egyptian prenup in the Oriental Institute of the University of Chicago measures almost 2 1/2 metres long!

The Ancient Egyptians Had Self-Help Books

The “self-improvement” genre of literature may seem  like a recent, New Age-y phenomenon. But it’s not. An ancient Egyptian text called Teaching of Ptahhotep features sage advice on how to get ahead, make friends and influence people from an 110-year-old vizier to the pharaohs.

So, here’s a tiny sample of self-help advice on how to be a better manager, courtesy of Ptahhotep (via QZ.com):

If you are a leader,
listen quietly to the plea of a petitioner.
Do not rebuff him from what he planned to say:
a victim loves to vent his anger
more than to achieve what he came for.

They Were Pioneers in the Art of Body Hair Removal

This devotion to the clean-shaven look is even more impressive given the tools they had to work with. Razors were made of copper, bronze and finally iron. It was probably quite difficult to keep them sharp.

But scholars have also translated recipes for both waxing and sugaring. These two methods of hair removal only became widespread in the Western world over the past few decades.  One such recipe involved crushed bird bones, oil, sycamore juice, and gum.  Other, more pleasant-sounding recipes contained beeswax or honey.

Got any other fun facts about ancient Egypt? Share them in the comments!

Tags: History
Previous Post What The History of the English Language Reveals About Its Future
Next Post Is Google Translate Really As Good As a Human Now?